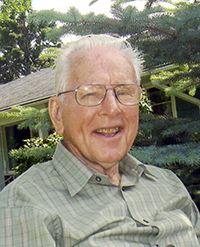 Funeral services for Bob will be at 10 a.m. Saturday at Grace Lutheran Church. Visitation will take place one hour prior. The Rev. Shane Koepke will officiate. Burial will follow at Hillcrest Cemetery in Albert Lea.

Robert “Bob” Nelson was born Oct. 16, 1926, to Curtis L. and Ella A. (Olson) Nelson in Albert Lea. Following high school, he joined the U.S. Army, and after being honorably discharged from the military, Bob pursued a career in education. He enrolled in and spent two years at Waldorf University in Forest City before he graduated with a bachelor’s degree from Pacific Lutheran University in Parkland, Washington.

Bob joined a school district in Cleveland, where he taught fourth and fifth grade for two years before moving to Valier, Montana. Before retiring from the school district in Valier, Bob spent many years tutoring students, ages kindergarten through high school, who had difficulties reading.

Bob was a member of Grace Lutheran Church in Albert Lea. He was involved in teachers associations, Parent Teacher Organization and Sons of Norway. Bob loved maintaining his lawn and pulling weeds. His family will remember him as a caregiver, always selflessly tending to the needs of his family and neighbors.

Bob is survived by his sister, Mary Lou Olson, and her husband, Truman, of Brownsdale; and many nieces and nephews.

Memorials may be directed to Grace Lutheran Church Foundation.