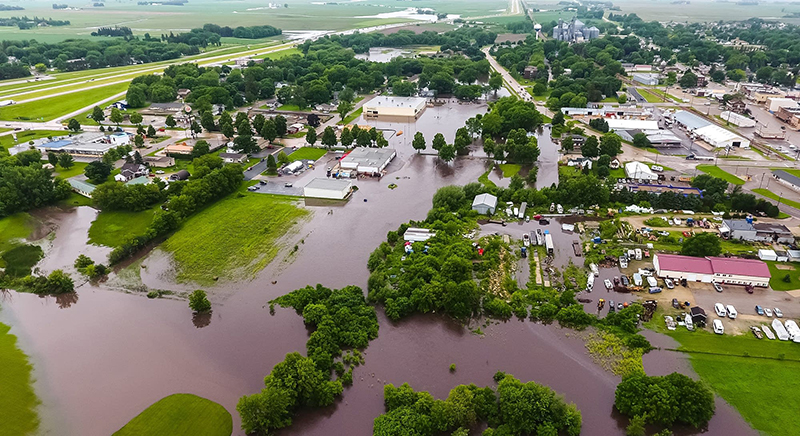 Masten Creek floods homes and businesses Friday in Kasson. The former Shopko building is visible in the top center of the frame. - Andrew Link/Rochester Post Bulletin via MPR News

Seven inches of rain hammered the Rochester area in just a few hours overnight Thursday into Friday, prompting a flash flood warning that remained in effect much of the day.

The overnight storm came on top of several other downpours that happened earlier in the day Thursday, making for flooded parking lots and intersections.

MnDOT also shut down Highway 52 in both directions near Pine Island Friday afternoon because of water over the road.

The Rochester airport closed briefly in the early morning due to a flooded runway. The airport sits on one of the city’s higher points.

The city closed stretches of its bike trail system and some sections of road. A few local parks were completely under water and closed.

Towns nearby including Kasson and Byron saw standing water as well.

And in Pine Island, city officials encouraged people living in the part of town near the south fork of the Zumbro River to leave their homes. A local church was opening its doors for anyone who needed shelter, according to the town’s Facebook page.

The flooding brought additional headaches for crop farmers who were already dealing with depressed corn and soy prices at the start of the year. Record moisture in March and April hit the area, which delayed planting.

Martin Larsen farms near Byron, and said it’s increasingly common to have delayed planting seasons due to wet weather. This year, the ground remains saturated and repeated heavy rains have washed away nutrients that are necessary for a good crop.

At this rate, Larsen said, he’s pretty sure he won’t make a profit and expects crop insurance to float him financially until next year.

High water from the Zumbro River swept Brent Eustice’s roughly 50 cows — about one-third of his herd — downstream during the overnight storm.

About 30 of the cows have been spotted in the area, Eustice said, and he’s planning to use feed to lure them back. The other 20 or so remain missing.

Eustice said his family has raised cattle in Byron for years and they’ve never floated away before. He said flooding usually happens much earlier in the year, and they’re usually able to get the cows to safety before the river peaks.