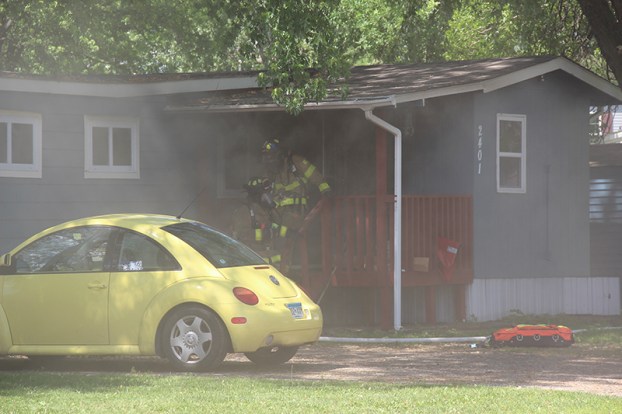 Albert Lea firefighters respond to a fire at 2401 Ethel Ave. Monday afternoon as smoke comes out of the house. - Sarah Stultz/Albert Lea Tribune

A short in an outlet led to a fire on Ethel Avenue Monday afternoon that damaged a home in Albert Lea.

Albert Lea firefighters and police officers were dispatched to the fire, at 2401 Ethel Ave., at 2:40 p.m., according to an Albert Lea Fire Department press release.

When firefighters arrived, smoke and fire could be seen coming from multiple windows of the home.

Everyone was able to get out of the house safely, and firefighters worked to extinguish the fire.

According to the release, the heaviest fire damage was in the living room and kitchen area, though smoke damage was found throughout the residence. Damage was estimated at $20,000.

The Fire Department stated the cause of the fire was a short in the stove outlet below the floor level. The fire traveled in the void space below the living room floor and came out into the living space through a central air floor vent.

One firefighter was treated and released at the scene for heat exhaustion.