‘Some days we wonder why’: Family holds on to small dairy operation — for now 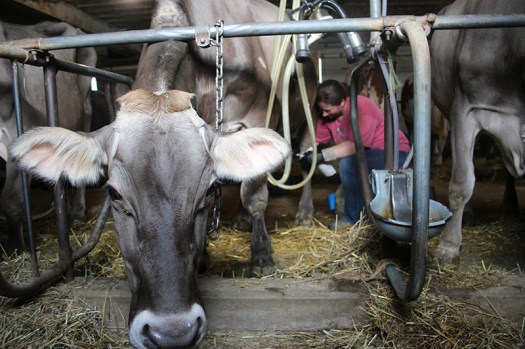 Jennifer Shoars uses newspaper to clean off a cow's udder before hooking her up to a milking machine. - Sarah Kocher/Albert Lea Tribune 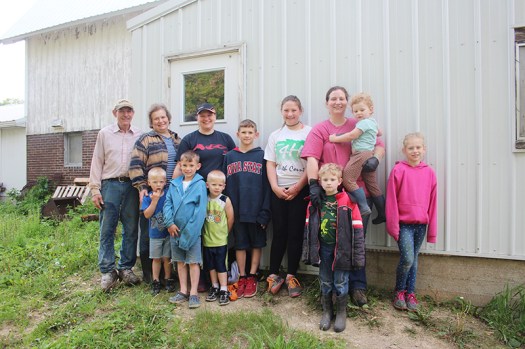 Morris and Jenelle Medlang's grandchildren are the fifth generation of their family to grow up around High Hope Farm. - Sarah Kocher/Albert Lea Tribune 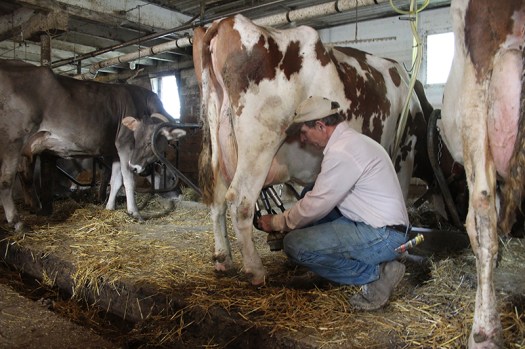 Morris Medlang hooks a cow up to a milking machine at the Kensett dairy farm built by his grandfather in 1926. - Sarah Kocher/Albert Lea Tribune 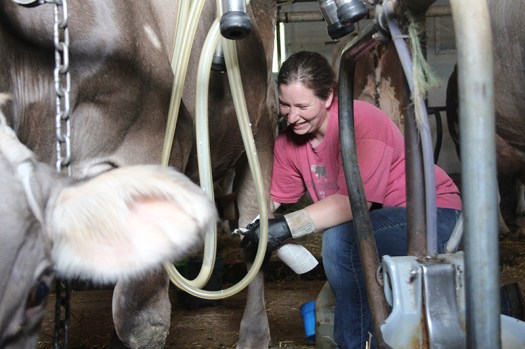 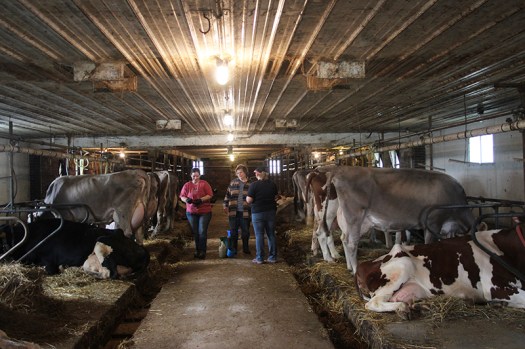 KENSETT — In his barn Tuesday morning, a Kensett dairy farmer points to a stuffed Barney the Dinosaur. It sits on the straw-covered concrete floor between a pair of cows. Barney himself is slightly discolored by straw particles.

The dinosaur was given to him by a man he met at Red Wing Museum whose grandfather milked cows. Operating a small dairy makes Medlang the same as Barney, the stranger said.

It makes him a dinosaur.

Medlang, his wife and two of his daughters feed and milk 35 cows on the farm Medlang’s grandfather built in 1926. They expanded the barn 10 years ago and at one point, the operation had 50 cows, but their head count is down now.

In addition to raising dairy cows, the farm also raises what it needs to care for them: oats, grain, hay, alfalfa, grass, corn and soybeans for food and bedding.

He also raised six children on High Hope Farm with a 30-cow dairy. On Tuesday, his children’s children ride their bicycles up and down the drive.

For Sarah Heiken, Medlang’s daughter, it is a privilege to work with her parents and to have her children experience the farm as she did when she was a child. Her children, the fifth generation, are having the chance to be part of the history of the family farm, which she said has maintained the same integrity with which it started.

“Our kids aren’t living here like we did, like my dad did, but you know, but still they’re here every day and they get to be a part of the history that is our family and that, that’s just really cool to me and it is, it is a little sad to think that for the first time in history, there’s probably not a future in, you know, for our kids,” Heiken said.

In 1988, when Medlang and his wife, Jenelle, moved to his grandfather’s dairy farm after working on their own for over five years, there were at least five creameries wanting to buy their milk.

“Today, it’s like nobody wants to buy your milk,” he said.

Agriculture is trending toward the large producer, he said. Why get milk from 40 or 50 cows when you could get it from 1,000?

He is still able to sell his milk to a business in Le Sueur, but he feels he is losing access to the market.

He said he will operate his dairy farm for as long as he can. How long that will be is the question.

While his two daughters help, Medlang said he doesn’t know how to pass on the decision-making about the dairy as well as what they would need to know about how to make the machines — most of which Medlang says are all but obsolete — stay in working order.

“I don’t know how it can continue,” Medlang said.

As far as he’s concerned, the family dairy has made it this far by the blessing of a God who has provided for them. Their animals have been healthy. He has been healthy. His family provides support.

“I don’t believe a person could do this without the support of family,” Medlang said.

Jenelle Medlang has had both knees replaced and has arthritis in her hands from the motions of milking. Their daughter Jennifer Shoars already wears braces on her hands to milk the cows.

It’s a life of hard work, Shoars said, and the wear-and-tear is every day. The cows need milked twice a day, every day.

The cows even get more vacation than Morris Medlang, he said. They get two months off a year between milkings.

“My dad’s something, but he should be retired and relaxing,” Shoars said.

The wear is more than physical, too.

“We aren’t needed,” Morris Medlang said of small dairy farms. “You know, we could work hard every day, but nobody really cares.”

Medlang said this is where he sees mental health as a concern for small farmers. It’s more than concerns with money.

But it is hard, Medlang said, to feel like nobody needs or wants you. The size of a dairy farm shouldn’t determine its value, he said. But in the world he sees, it does.

“Some days we wonder why,” Jenelle Medlang said.

He enjoys working with animals and crops, Morris Medlang said. Each of the cows has a name. They have a personality, Jenelle Medlang said, just like people. This personal relationship with animals is what you get at a smaller dairy, Heiken said.

“You get to know them, and they become a part of your family almost,” Jenelle Medlang said.

Morris Medlang likes the family aspect he saw as an integral part of the farming culture when he was growing up.

“I believe it’s what rural America is supposed to be doing,” Morris Medlang said.

He grew up on a diversified farm himself. He said he wants that for his neighbors again.

They do it as a way of life, Jenelle Medlang said.

That, Morris Medlang said, and he can’t afford to quit.

To at least one generation, an appreciation for the dairy has trickled down. Shoars majored in dairy science in college.

That’s not strictly true. For a few years in between, she worked as a banker. But her parents are aging, she said. She said she knows her father couldn’t do it without them, and these are the same parents who have helped her at the drop of a hat.

It’s payback, Shoars said. It’s the right thing to do.

But neither Shoars nor Heiken see more longevity in the dairy than their father.

“You don’t know what the future of it is,” Shoars said.

Even if they did stay, even if they wanted to carry the dairy forward, Heiken said, what for?

But Shoars is thinking about what it may take to hold on to, if not the dairy, at least the land. She has gotten creative. She has thought about opening her own creamery or turning it into a wedding venue or growing lavender or offering goat yoga. She has thought about raising crickets and flavoring them blue raspberry.

To hold on to the farm, it will have to find a way to change, Shoars said.

Two weeks ago, the Medlangs put in a new well. Their old one ran out of water. It was expensive, he said, but it could last the dinosaur another 100 years.

“But who’s gonna be needing to utilize it in the next 100 years, you know?” he said.