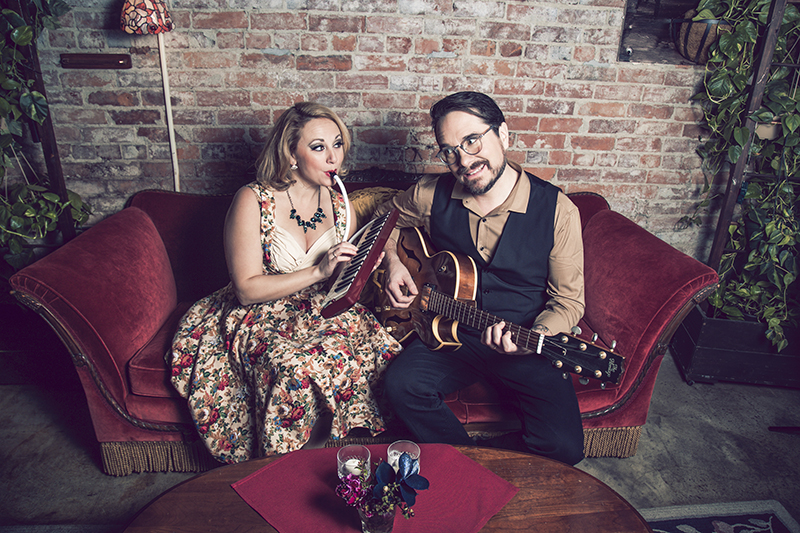 Performers Kate Voss and Jason Goessl together are Sundae & Mr. Goessl, a husband-wife duo devoted to music from the ‘20s and on. - Provided

Two musicians are working to bring back the sounds and songs of the ’20s and ’30s with a duo show that includes information, jokes and historical anecdotes along the way.

“Our show is more than just music,” guitarist Jason Goessl said. “We incorporate educational stuff as well as comedy and a little schtick with everything.”

Sundae & Mr. Goessl, comprised of Goessl and his wife, Kate Voss, who supplies vocals, will perform at Marion Ross Performing Arts Center for the second year at 7:30 p.m. Monday. The pair will work its way through a mix of songs from the 1920s to today.

Goessl said he is inspired by a lot of the country guitar players from the 1930s. Additionally, later guitarists like Les Paul, Roy Clark and Chet Atkins also serve as inspiration for his fingerstyle guitar technique. It’s a technique that lends itself to a more robust sound.

“It will sound like there’s three guitar players playing at once,” Goessl said.

Goessl started playing guitar at age 9 with lessons in classical guitar. He said his interest in jazz came in high school and led to a college scholarship for jazz. After college, he got interested in old country music and country swing, which he said was fun to play.

When Goessl and Voss met around six years ago, they were both playing in rock, pop and country bands, among others.

“I was playing in 18 different bands when I first met her,” Goessl said, and close to 400 gigs a year.

He said he needed to slow down, and they started listening to duo acts like Tuck and Patti and Les Paul and Mary Ford.

“There’s a need for this music,” Goessl said of the ’20s and ’30s arrangements they perform, which feature more harmony and melody. “Nobody’s doing it.”

The songs may be familiar, but the arrangements are a fresh take crafted by Sundae & Mr. Goessl. Voss, known for her work as a jazz vocalist, will put her own vocal technique into the piece, while Goessl said he works in guitar sounds different than what has been heard with these pieces before.

“We do a lot of the same songs that, like, Frank Sinatra would have done, but we do them in our own style,” Goessl said.

The group also writes and performs original music. Goessl said the songs tend to run about three minutes long and the show is frequently switching things up.

“We have a very compelling and fun show,” he said.