A joint leader for the Knights, Wolverines 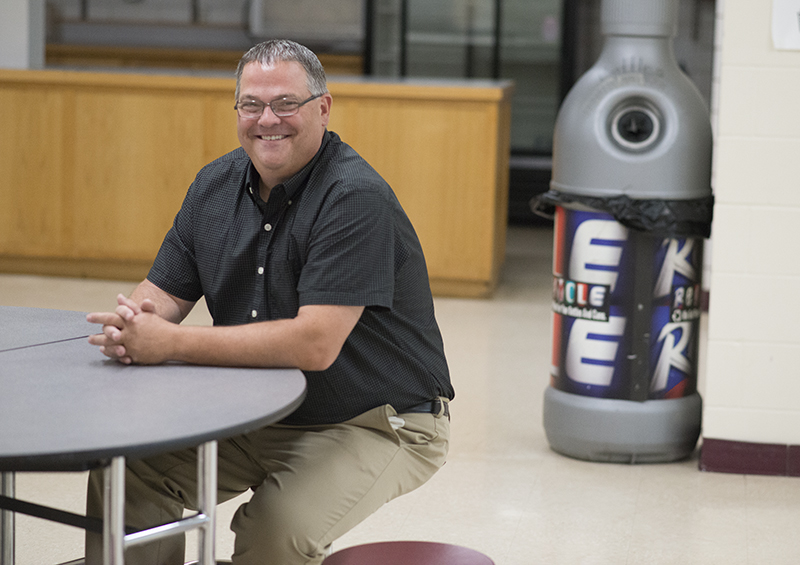 Paul Meyer recently started his job as joint athletic director for Alden-Conger and Glenville-Emmons schools. Meyer has spent many years teaching and coaching at multiple schools before taking on his new role. - Tyler Julson/Albert Lea Tribune

On top of the four sports Alden-Conger and Glenville-Emmons already share, the two districts have come to an agreement to hire a joint athletic director as well.

Paul Meyer, a teacher and coach in the area for many years, was selected out of five finalists and started in the position Monday.

Spending the majority of his life in southern Minnesota, Meyer grew up in Kiester, attended Waldorf College and Minnesota State University-Mankato and has since held a variety of teaching and coaching positions in the area, including an earlier stint at Alden-Conger.

Although this will be his first experience as an athletic director, Meyer said he is looking forward to starting the school year.

“As I’ve gone through my career as a teacher and a coach, this was always something that intrigued me,” Meyer said. “I’ve had the opportunity to work with some incredible athletic directors and I look at what a great influence they can have on the teams, the school and the community. To have the opportunity to come in and do that myself is pretty special.”

According to Meyer, another advantage of taking the job is the fact he gets to remain close to home. He said he likes to help out on his family farm as much as he can, and staying in the area will allow him to keep up his work on the farm.

Meyer said he found out about the job opening by keeping a close eye on job boards in the area. He said the very day the job was posted, he was in the Alden-Conger offices asking about the position and turned in his application a few days later.

Meyer will also have the added challenge of being a dual athletic director, juggling duties for both Alden-Conger and Glenville-Emmons. He expects some of the biggest challenges to come with the scheduling and the time it will take to get to know all the coaches.

“Going into a new school, it’s going to be all new coaches,” Meyer said. “So me getting to know who they are, what they do, what their needs are, I guess I look at my job is to make their job easy. I want them to be able to just coach. I’ll take care of all the paperwork, the computer work and the game management.”

He said the transition into the new position was made much easier by both schools’ previous athletic directors Paul Ragatz and Craig Rayman. Everything they handed off after they stepped into their other roles in their respective schools was very organized and well put together, according to Meyer.

Alden-Conger and Glenville-Emmons are currently in sharing agreements in football, girls’ basketball, baseball and softball. Meyer talked about the advantages those teams and the others will see out of having one athletic director.

“Before, if someone had an issue, question or just wanted information about the combined sports, it was ‘Well, who do we call?’” Meyer said. “Now they know who to call. It will for sure simplify things in that area.”

When he’s not working, Meyer said he likes to spend time on his family farm. He said fixing the odds and ends at the farm provides him with his biggest stress relief. He also enjoys watching sports and playing golf in his free time.

“The things I really enjoy are going to games and watching people play,” Meyer said. “I’m basically getting paid for something I love to do. I’ve had the honor of working with some incredible athletic directors and I hope I can take some bits and pieces from them. I’m excited to get started.”