A new leader for the Knights 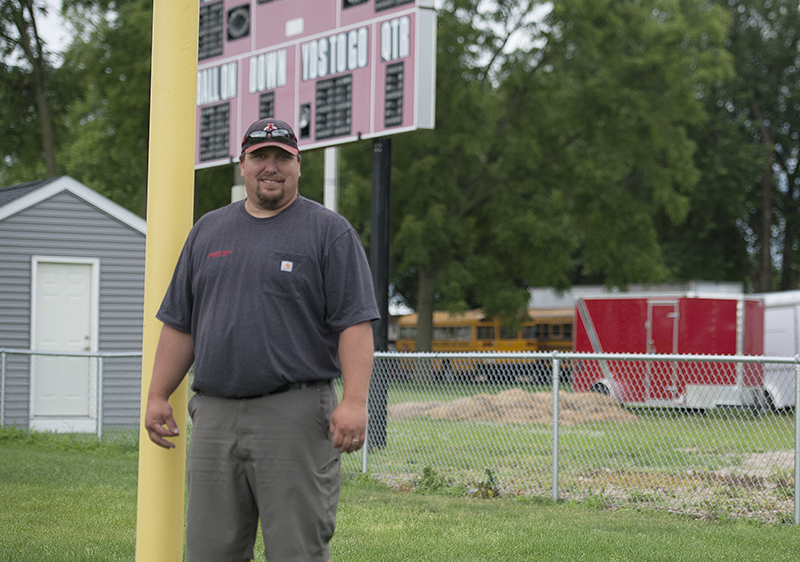 After spending four years as a varsity assistant and defensive coach, Casey Soost will have his chance at being the head coach of the Alden-Conger/Glenville-Emmons football program. - Tyler Julson/Albert Lea Tribune

ALDEN — For the first time as a cooperative team, the Alden-Conger/Glenville-Emmons football program will be under new leadership.

Over the past four years, Casey Soost has spent time on the sidelines as an assistant and defensive coach. Now, with former coach Chad Mattson stepping down, Soost is taking on the role of head coach.

As a lifelong resident of the Alden area, Soost is excited to take the reigns of the team. One of the biggest reasons he decided to take the job was the chance to coach his son and his friends.

“I have a son on this football team, and with that all of his buddies in that grade,” Soost said. “I just don’t feel like I could quit on them at this point. I want to be able to see them through these next couple years.”

Not only will the Knights transition to a new head coach, they will also see a big change to the way they play the game. This year will mark the first season the Knights will play as an 11-man team. In previous seasons they played as a nine-man team during the regular season, but were forced to jump to 11-man in the postseason.

The move up a class and finding players to replace last year’s seniors will be some of the biggest challenges facing the team, according to Soost.

“We had seven seniors on the team last year, and all seven started,” Soost said. “We’ve got to replace those seven and add another two, so we’re basically trying to find a whole nine man roster again.

“That will be a challenge. Finding the bug guys in the line, but that’s the same for a lot of other schools. It’s always the line.”

There won’t be a lot of change in the system from when Mattson was in charge of the team, according to Soost. He said he will stay in charge of the defense and offensive line just like he always had and will lean on his assistant staff to run the offense.

The Knights start their first 11-man year with a rough schedule, playing three teams that made the state tournament last season. Soost said it’s going to be hard, but playing a full year of 11-man games will be beneficial when the postseason rolls around.

“Everybody thinks it’s just adding two players, but when you are used to playing nine guys and you get them to gel, throwing in two more players just throws everything off kilter,” Soost said. “I don’t want to make excuses, but it can be hard. Playing the whole year 11-man will be good.”

Soost said the team has a big junior class and some returning seniors from last year’s squad who are going to be able to compete with any teams they meet this season.

When not coaching football, Soost described himself as an outdoorsman. He enjoys camping, hiking, hunting and fishing, especially anything he can do with the rest of his family.

“I’m excited for them to get the pads on and start smacking each other,” Soost said. “Watching the defense get out there and hit some people and the fundamentals of the offense line. How they move their guys and transfer to the next guy, that’s what I love about football. I’m excited to get started.”