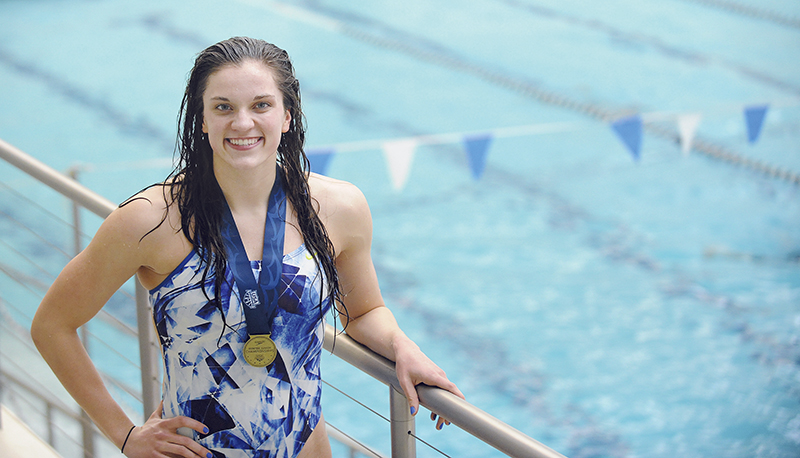 Lindsey Horejsi stands in front of the Albert Lea High School pool in January 2015 after a training session with the Albert Lea boys’ swim team, while she wears a medal for taking first place in the 100-yard breaststroke at the USA Junior National Championships in December 2014. - Micah Bader/Albert Lea Tribune

Here is an overview of each OT cut made by Gophers swimmers to date this year, with room for growth as the summer’s swimming slate is not yet complete.

Having received All-American honors in each of her first three seasons with the Gophers, Kozelsky has made two OT cuts already this summer. On July 6, the rising senior swam the 200 breast in 2:33.11 to earn her second cut in a span of two weeks. The weekend prior, Kozelsky put the finishing touches on her first OT cut, finishing the 100 breast with a time of 1:09.52.

At July’s Speedo Champions Series held at Jean K. Freeman Aquatic Center, Kelley made his first OT cut by touching the wall in 3:57.12 in the 400 free. With his junior season just around the corner, Kelley enjoyed a strong second year in the pool for the Gophers in 2018-19, helping the 800 free relay team finish fifth at the Big Ten Championships. He also claimed an eighth place finish in the 1650 free at the meet.

Swimming at the Speedo Championship Series at Rutgers University last weekend, Kilgallon earned an OT cut in the 1500 free with a time of 16:45.40. A freshman this past season, Kilgallon placed 10th in the 1650 free at the Big Ten Championships.

Also at the Speedo Champions Series in Minneapolis, McHugh recorded his second OT cut of the summer, touching with a top time of 2:14.00 in the 200 breast. In addition, he previously qualified for the Olympic Trials in the 100 breast, with his top time in the event coming in at 1:00.99. As a freshman in 2018-19, McHugh earned All-American honors in the 100 breast and 200 breast, as well as Honorable Mention All-America in the 400 medley relay.

Entering the month of August, Waddell is the most decorated Gopher in terms of OT cuts made so far this summer. Already with three under her belt, Waddell’s most recent came when she swam the 100 fly in 59.69 on July 6. The Mitchell, S.D. native’s other cuts came in the 100 back and 200 back, which she finished with top times of 1:01.11 and 2:10.78, respectively. Soon to embark on her senior campaign, Waddell was an All-American in the 400 medley relay as a junior and also received Honorable Mention All-America nods in the 800 free relay and 200 medley relay.

Becker hauled in his lone OT cut of the summer back in May while competing at the Speedo Grand Challenge in Irvine, Calif. With a time of 22.86 in the 50 free finals, Becker punched his ticket to a future Olympic Trials appearance. As a senior in 2018-19, he was an All-American in the 50 free and 100 free, including an Honorable Mention All-American in the 400 medley relay.

Last weekend, McHugh finished the 200 breast alongside his brother to pencil in his second OT cut of the summer. Touching the wall in 2:15.17, McHugh added the 200 breast to his list of future Olympic Trials events, having already qualified in the 100 breast with a time of 1:01.82. Currently pursuing his postgraduate swimming career while simultaneously working as an Administrative Intern for Minnesota Athletics, McHugh was an All-American in both the 100 breast and 200 breast as a senior in 2017-18. He also received Honorable Mention All-American status in the 200 medley relay.

A 2018 Minnesota graduate, Nack emerged from retirement and swam the 50 free in 25.82 last weekend at the Speedo Champions Series. Marking her first OT cut of the summer, Nack previously finished second in the same event in the 2018 Big Ten Championships. That same year, Nack was an All-American in the both the 200 and the 400 medley relay.