Memorial services for Arthur R. Ludtke Jr. of Albert Lea will be at 11 a.m. Monday at First Lutheran Church in Albert Lea. The Rev. John Holt will officiate. Interment will be in Graceland Cemetery. Military honors will be accorded by Albert Lea veterans organizations. Visitation will be from 5 to 7 p.m. Sunday and one hour before services at the church. 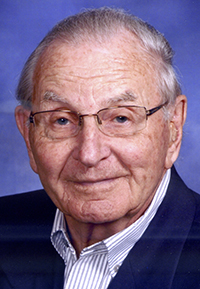 He was born Feb. 26, 1926, in Walters, the son of Arthur R. and Pearl (Katzung) Ludtke Sr. He graduated from Albert Lea High School and then proudly served his nation in the U.S. Navy. Art served from June 1944 until his honorable discharge in May 1946.

His joy for serving was evident in the many ways he volunteered. He served on many committees and boards within his industry as well as his community. He had served as Albert Lea Chamber president for two terms, the Albert Lea district school board for eight years, many offices at First Lutheran Church and its council, and volunteered on the Clarks Grove Fire Department. He continued his involvement well into his 80s by serving on the watershed board for eight years.

He was preceded in death by his parents Arthur Sr. and Pearl Ludtke; and brothers-in-law and sisters-in-law Roger Behle, Elwood and Norma Ingvaldson, Irene and Herman Myre and Jennelly and Robert Groe.

“Bumps,” as he was affectionately known to many, lived his life with great integrity. His great love for Jesus was always reflected by the love he shared with his family and community and his unending gentle, helpful presence.