Concert review: Tour brings ’90s country back to the fair 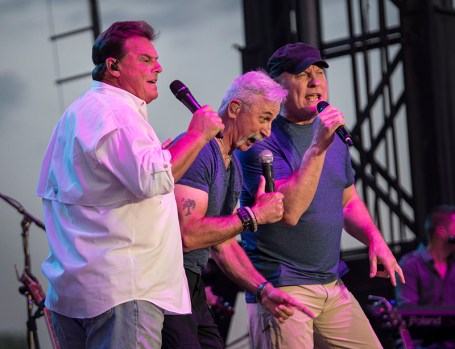 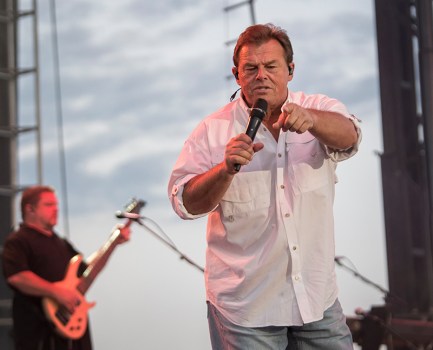 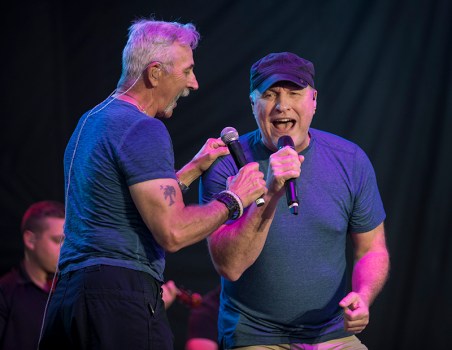 Aaron Tippin, left, and Collin Raye perform as a part of the Roots & Boots Tour on Wednesday at the Freeborn County Fair. - Colleen Harrison/Albert Lea Tribune 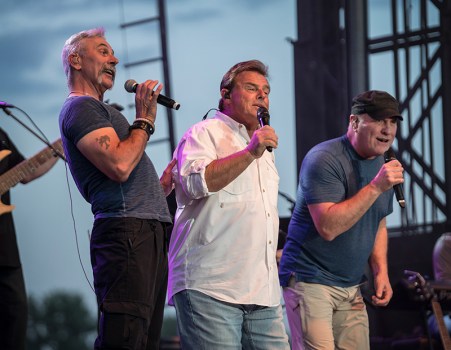 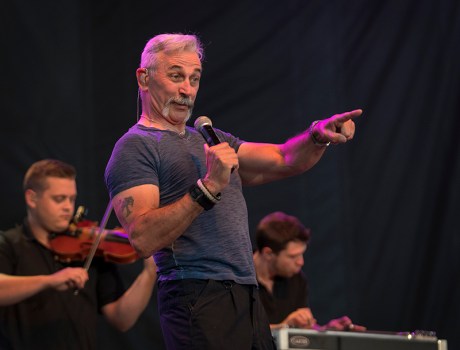 Aaron Tippin points to the crowd while performing Wednesday at the fair. - Colleen Harrison/Albert Lea Tribune 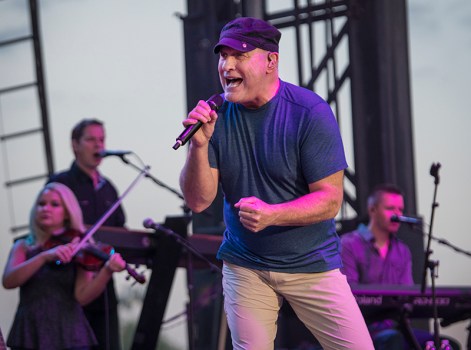 If the Roots & Boots Tour proved anything to Albert Lea, it’s that ’90s country is nowhere near dead yet.

“If you don’t have any fun, it’ll be your own fault,” Kershaw told the audience when his set began.

In talking to the audience, Kershaw established himself as the jilted underdog.

“They have a lot of No. 1 records, and I only have one,” he said, referring to Tippin and Raye. “I blame Tracy Lawrence for that.”

He told the crowd the reason his single chart-topper peaked was a DJ in Dallas who locked herself in the control room and played his song on repeat for four hours.

Whether or not they had a DJ in Texas to thank, the whole Grandstand sang along to Kershaw’s “She Don’t Know She’s Beautiful.”

Kershaw — who said he will celebrate his 50th year in country music soon — also ran through “What’s Left of You and Me,” “Cadillac Style” and “Queen of My Double Wide Trailer,” throwing out Mardi Gras beads to the reserved section.

Tippin was the most animated of the three, using his time on stage to impersonate several characters in his songs — the stern cop chastising a couple in “There Ain’t Nothing Wrong with the Radio,” or the livid woman preparing to dole out a punch in “Kiss This.” He put the holler back in hoot and holler, starting most songs with a guttural “Yeeeeeah!”

As he prepared to sing “There Ain’t Nothing Wrong with the Radio,” Tippin turned around to face the exit Kershaw used to get offstage.

“Sammy!” he yelled into the night, shaking his butt at the crowd. “Sammy! My first No. 1 here, buddy!”

He stripped “You’ve Got to Stand for Something” down to the drumbeat for the final chorus, opting for tight harmonies and a finger pointed in the air. “My Blue Angel” shone with steel guitar.

Tippin also brought the crowd to its feet in a standing ovation as Kershaw brought the American flag onstage for “Where the Stars and Stripes and the Eagle Fly.” Tippin made a show of retrieving his guitar and taking it out of the case. After opening the lid, he whipped out the guitar — its entire face decaled with an American flag — stomped the case lid closed and kicked it offstage. Red, white and blue lights swirled as the audience clapped its hands in its loudest show of support before it called for an encore at the end of the night.

Collin Raye followed Tippin and kept the energy high with “Little Red Rodeo,” segueing into a slower “Little Rock” and picking it back up for “I Can Still Feel You” and “My Kind of Girl” (editing “You said you were a Braves fan” to appease Twins supporters in attendance).

He ended with “Love, Me” before asking, “Should we stop or should we keep going?”

The response was one-sided.

Kershaw and Tippin joined Raye onstage to run through other ’90s hits, including Johnny Paycheck’s “Take This Job and Shove It,” Glen Campbell’s “Rhinestone Cowboy” and George Jones’ “He Stopped Loving Her Today.”

“I wanna throat-punch him every night, he sounds so good,” Kershaw said of Raye.

An encore brought them back for Waylon Jennings’ “Are You Sure Hank Done It This Way.”

The audience was happy to fill in for the performers at several moments through the night, filling in for Raye with “That’s my story and I’m sticking to it” and Tippin for an emphatic “Kiss this.”

“Thank you so much for keeping ’90s country music — our music — alive,” Raye told the crowd.