Elaine Mary (Kalis) Wanzek, 91, of Inver Grove Heights, formerly of Wells, died Wednesday, July 17, 2019, at Inver Glen Assisted Living in Inver Grover Heights. A Mass of Christian burial will be at 10:30 a.m. Monday at St. Casimir Catholic Church in Wells. Visitation will be one hour prior to the service at the church. Burial will be in St. Casimir Catholic Cemetery in Wells. To leave an online condolence, visit brussheitner.com. Bruss-Heitner Funeral Home in Wells is entrusted with arrangements. 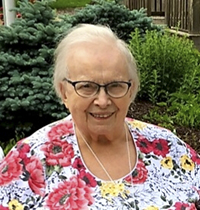 Elaine Mary (Kalis) Wanzek was born April 10, 1927, in Walters, the daughter of Joseph and Loretta (Horn) Kalis. She graduated from Kiester High School in 1945. Following high school Elaine attended Mankato Teacher’s College, where she received her teaching certificate. Walnut Grove Township hired her following graduation and she taught first through eighth grade in a one-room country schoolhouse prior to her marriage.

Elaine married Norbert Wanzek on June 15, 1949. After their children were born and the youngest was in kindergarten, Elaine started teaching at St. Casimir’s in Wells. She taught sixth grade from 1965 to 1970. During this timeframe, she received her Bachelor of Science in elementary education from Minnesota State Mankato by taking night and summer session classes for several years. In 1970 she began teaching for Kiester School District. She retired from teaching in 1991.

In her free time Elaine enjoyed baking bread and cooking, sewing, bus travel vacations and socializing with friends. Elaine and Norbert were lifetime members of St. Casimir’s parish and rosary society and lived their faith on a daily basis.

Following Norbert’s passing in 2010, Elaine moved to Hidden Creek in Albert Lea. In 2016 she moved to Inver Glen in Inver Grove Heights, where she resided until her death.