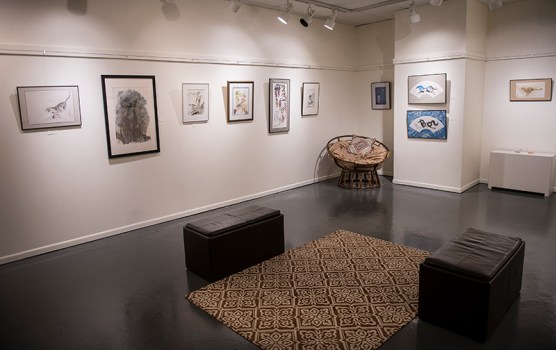 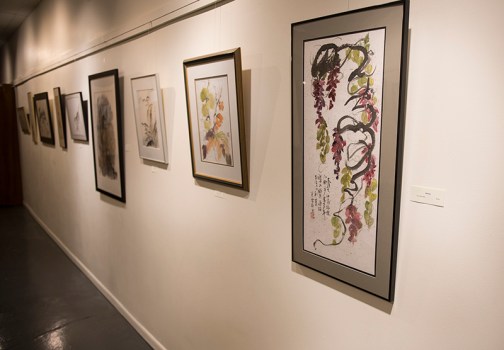 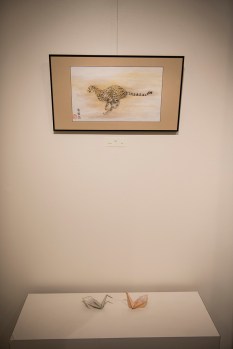 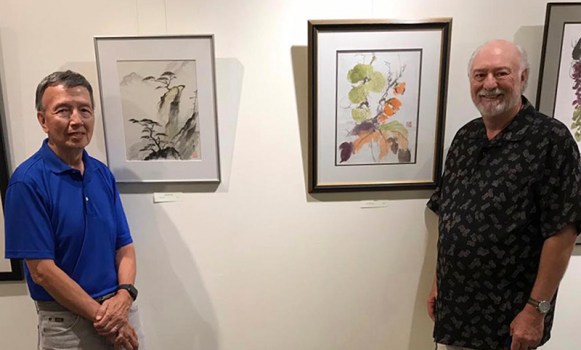 Before Craig Steinmetz painted ravens, he had to become one himself.

It’s the same way for anything he paints: before painting something, “you kind of feel what you’re going to put on the rice paper,” he said.

Part of this, Steinmetz said, is because once the brush hits the paper, there’s no turning back. Steinmetz works in sumi ink, and once it’s on paper, it is what it is.

But there’s more to it than that.

“You have to be able to develop that, you know, you have to understand where that energy is coming from,” he said.

Two of the three ravens in his “Raven Spirit” series hang next to each other, the whoosh of an implied wingbeat separating the two.

Steinmetz, who is based out of Brooklyn Park, said his work involves qi, an energy or life flow from within that he uses to create.

“You take the energy within your body and you apply that energy to your painting,” Steinmetz said.

Both Steinmetz and fellow sumi-e artist Ben Wong have their work on display as a part of  “Unscrolled,” a 33-piece gallery exhibition at the Freeborn County Arts Initiative showing through Aug. 31.

Sumi-e is a style of east Asian brush painting that uses black ink — sumi — and traces back to seventh century China, Steinmetz said.

But it has undergone changes since then, with influences from Japan and from Western style. According to Wong, who said he painted almost all his life but did not discover sumi-e until about 35, this Western style is where his sumi-e work fits.

His mother-in-law was taking sumi-e lessons, Wong said, and when her husband was unable to take her to a lesson one night, Wong took her to the basement of a church in north Minneapolis. He sat in the back, but the instructor gave him brushes and paper. He made a quick rabbit, he said.

“‘Oh, you’ve got to keep coming to this,’” he said the instructor told him.

Now, it is the only medium he has touched in quite some time, Wong said.

Wong is Chinese, and he said sumi-e seemed like a natural thing for him to be doing.

“It was more me,” the Eden Prairie-based artist said. “I felt like this is something that was just very natural for me to do.”

He likes wildlife and landscapes. He likes working in color less.

He studied under a Japanese woman who taught mostly using black ink, Wong said, and though he has no problem with artists who use a lot of color, he prefers shades of black.

“I just feel that just using black ink, I can get all the texture and depth and feel that I want, but I do admit that, you know, adding just a little color will bring it out a little more.”

It’s this pop of color he utilizes in “Running Tiger,” a profile view of a tiger in motion. Set into its socket, the tiger displays a small yellow eye.

On the opposite wall, however, is “Little Black Fish.”

According to Wong, his work is a bit more rigid than the free-flowing and relaxed style he appreciates Steinmetz’s work for.

“I’m kind of a stickler for detail,” Wong said.

Even in the more simplistic-looking “Little Black Fish” is the detail Wong captures in his work: below the fish is the faintest shadow below the fish as it travels.

In “Night Owl,” each snowy owl feather is mapped out in meticulous detail.

Just one painting away is “Wisteria,” thick swirls of motion in black ink making up the vine. Purple-red flowers drip down from the top of the piece.

Steinmetz calls his work a little more contemporary and abstract. That energy he tries to harness and utilize means he likes movement in his work. It’s slightly different than the elegant painting technique of sumi-e, he said.

“Mine is much bolder,” he said.

Steinmetz began sumi-e more than 25 years ago after attending a master artist class on Asian brush painting at Edina Art Center, he said. He did oils, pencil and charcoal, but “had not a clue” what sumi-e was.

“I kind of fell in love with the whole process immediately,” Steinmetz said. “… Right now, it’s my choice of painting.”

“I think we complement each other,” Steinmetz said of his own work and Wong’s. “I really do.”