How does your neighbor’s garden grow 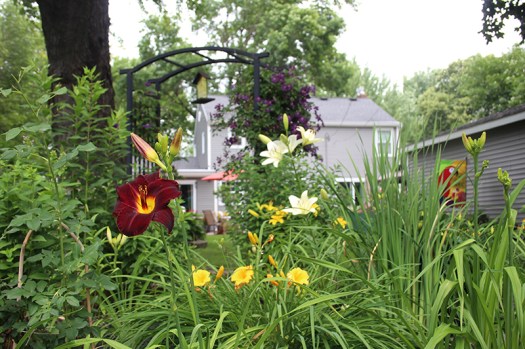 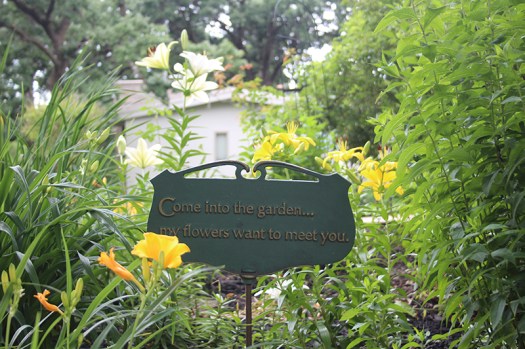 Another sign hangs in Janet and Bob Hartman's garden. Made by their daughter, it reads "Mama Jan's garden" and "where love grows." Sarah Kocher/Albert Lea Tribune 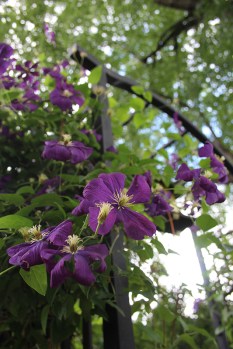 Clematis, Bob Hartman's favorite flower in their back garden, crawls up the side of the arbor in their yard. Sarah Kocher/Albert Lea Tribune 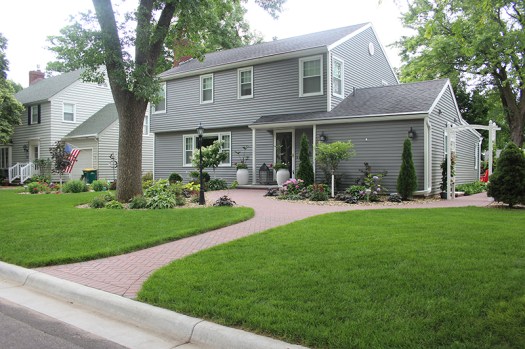 The Hartmans relandscaped their front yard two years ago, removing the driveway and replacing it with a sidewalk and garden landscaping. Sarah Kocher/Albert Lea Tribune 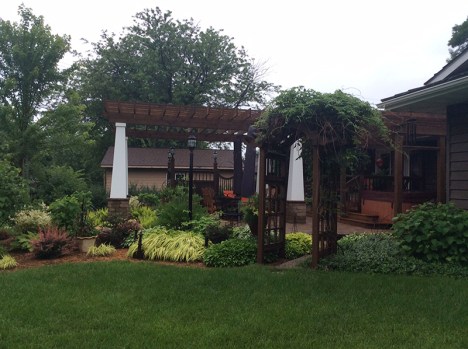 The Finseth garden used to feature largely shade-friendly plants, according to Art & Garden Tour co-chairwoman Beth Tostenson, but after storms took out their large trees, the garden has been prepared to catch more sunshine. Provided

Gardeners, artists prepare to showcase work in tandem on tour

Mama Jan Hartman’s garden is about to be open to the public.

The section at the far end of her backyard is packed with perennials: roses, phlox, clematis — Bob Hartman’s favorite — and liles in a handful of colors.

In front of this perennial patch, hung from the tree outlined in hostas, is a sign: “Mama Jan’s garden,” it declares, and below, “where love grows.”

Both the front and back gardens will be on display as part of The Albert Lea Art Center’s Art & Garden Tour July 19 and 20.

The tour pairs artists with gardeners, with both of their work on display. There are five gardens in this year’s tour, but those on the tour can also stop at Hill’s Gardens for presentations on creating container gardens.

One garden — Saundra and Jim Finseth’s — has been on the tour before, but at that time, Art & Garden Tour co-chairwoman Beth Tostenson said the garden was largely a shade garden because of the trees in the Finseths’ yard. However, those trees went down in a storm and have since exposed the yard to more sun, causing a change in garden as well, Tostenson said.

“They’re all so unique and different,” Tostenson said of the gardens on the tour.

Diann and Kavin Dressen will showcase not only their garden, but also their restored 1968 Shasta Star Flight camper. Charlotte Haukoos and Jeff Quam will also have a vehicle on display, as Plaza Landscaping & Garden Center provided plants for the bed of his vintage 1949 Chevy pickup.

Kim Erickson’s garden was landscaped by previous owners, and Erickson reaps the blooming surprises they planted.

By contrast, Bob and Janet Hartman’s gardens are all their own.

“You go in the backyard and it’s just like a wonderland,” Tostenson said.

The couple has lived in their home for 29 years, but just recently the front yard underwent an overhaul. The driveway was removed and the front was relandscaped with a brick walkway that extends along the side of the house and leads to a matching brick patio in the back.

The backyard also used to have a small gravel driveway where the former owners would park an RV, Janet Hartman said. The gravel was removed and replaced with grass and her back garden.

“It’s evolved with the times,” Janet Hartman said of her backyard. There was a playset when her four children were younger, and rather than perennials, there used to be a vegetable garden in the back. While a few tomatoes still lurk among the lilies, most of her vegetables — tomatoes, peppers — live in containers closer to the house.

The front driveway was removed two years ago when the Hartmans were ready to retire, Janet Hartman said, and they no longer needed it. The new landscaping in front and back was intended to make their property more maintenance-free, Bob Hartman said — though some weed always needs to be pulled and something always needs a trim.

Bob Hartman said he considers the tour a chance to showcase their hard work and share ideas with other gardeners.

For Janet Hartman, her plants provide color — and a variety at that — and she likes that. She also has a penchant for fresh flowers, she said.

“We planted things so we would always have color out there,” Janet Hartman said of their front garden. “… There’s always something blooming.”

Now, it is hydrangeas, roses and lupine.

It is nice to look out at her gardens in the morning, and satisfying to see things grow.

Bob Hartman said he gets satisfaction out of keeping the lawn trimmed to show off his wife’s hard work in the garden.

“You pass it down from generations,” Janet Hartman said. “I think that’s kind of cool — not only the love of gardening but also the actual plants,”

Her hostas came from another person in her neighborhood. Lots of her neighbors also have a love for gardening, Janet Hartman said, and it brings people in the neighborhood together. They often see each other outside, said Bob Hartman.

“They’ve been shared with other people who love gardening,” Bob Hartman said.

That neighborhood feeling touches two other gardens on the tour — or, rather, the gardens touch each other. The Dressen and Haukoos and Quam backyards abut each other.

Gardens and artists are paired based on room and personality, Tostenson and fellow co-chairwoman Joyce Purdy said. Both the artists and gardeners will be present during the tour, Purdy said.

Those attending the Art & Garden Tour will also receive an educational pamphlet intended to provide ideas for visitors’ own gardens, Purdy said. The pamphlets will be handed out at the gardens when visitors check in or purchase tickets.

Who: The Albert Lea Art Center

What: Art and Garden Tour

How much: $10. Tickets are available ahead of time at the Convention and Visitors Bureau, Addie’s Floral & Gifts, Hill’s Gardens, Wind Down Wednesday and The Albert Lea Art Center. Tickets are also available for purchase the day of at each of the garden locations.