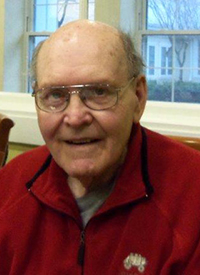 He leaves behind a generally insane family that he found largely exasperating: wife, Frances, of Albert Lea; daughter, Kristin, of Chanhassen; son, Kevin; daughter-in-law, Diane; and granddaughter, Adelaide Godzilla (her actual middle name) of Westminster, Maryland. He was mostly proud of and amused by his children, and always thought his granddaughter was a real hoot.

Hoyt was born in Clarks Grove and spent almost his entire life in and around Freeborn County. He was raised on a farm where life was tough. Transportation to and from school was a noteworthy challenge. Indeed, Hoyt was quite possibly the originator of the famous “I used to walk to school uphill in the snow, both ways, barefoot” cliché — if not, he was certainly an early adopter.

While in high school, he was a captain of the last football team in Albert Lea High School history to play without facemasks. Hoyt noted coyly that his Fighting Tigers squad featured a biter that was never identified; his family can neither confirm nor deny that it was him, and any extant forensic evidence has been unfortunately lost to time.

He had a Bachelor of Science degree from the University of Minnesota, where he majored in business and geology. Hoyt’s employment history was fairly standard, starting out as a loan officer at a savings and loan, ultimately retiring from a career as a full-time real estate appraiser and part-time swashbuckler. While the appraisal business paid the bills, it seemed like the thing Hoyt enjoyed most was making friends with the pets in the houses he was working in. His family is confident he is one of, if not the only real estate professional in the United States that could legitimately claim Milk Bones and Friskies as a deductible business expense, as he never went to work without some dog and cat treats in addition to his regular appraising paraphernalia.

While able, Hoyt was an active member of the local Ambassadors, Rotary Club, Masonic Lodge and Shriners Club, of which he had the fondest of memories. His family likes to think he is presently serving at the big pancake breakfast in the sky in advance of sporting a bedazzled fez and driving little Shrine cars in a parade, also in the sky.

An engaged father, Hoyt never — and his children mean never — missed any of his children’s concerts, athletic contests, recitals, graduations or other events, no matter how far away, tedious or ghastly. His ability to doze anywhere with his eyes open undoubtedly paid dividends. As implied above, he was also an animal lover, at home nurturing a series of vicious Yorkshire terriers over the years and developing in later life a strong affinity to his daughter’s yappy dogs and his son’s evil cats. His family notes that animals of all sorts, including small children, were hilariously amused and sometimes unnerved by his skill in producing an unusual squeaking sound with his lips.

Hoyt was an avid fisherman. An adherent of the dread Lindy Rig, he decimated the walleye population of northern Minnesota and southern Ontario for many summers, much to the chagrin of his brothers, who were more serious, but considerably less successful anglers.

A lifelong, long-suffering fan of the Minnesota Vikings, Hoyt was perpetually frustrated by the franchise’s chronic underachievement. In fairness, a Vikings championship of recent vintage would have in all likelihood caused Hoyt to summarily drop dead. Small blessings, perhaps?

At his directive, Hoyt has been cremated. His remains will be buried at the North Freeborn Lutheran Church cemetery in a private family ceremony. No date for burial has been set, as his children would like the opportunity to pass his urn back and forth in increasingly creative and offensive ways for a few gift-giving holidays.

A reception honoring Hoyt’s life will be take place from 5 to 7 p.m. Aug. 7 at Albert Lea Masonic Lodge, 147 N. Broadway Ave., with a memorial service to follow at 7 p.m. In lieu of flowers or sundry items, the family prefers donations to Shriners Children’s Hospitals. After that, eat a Milky Way bar. Hoyt loved those.