Lake Mills-based comedian is working to develop his career 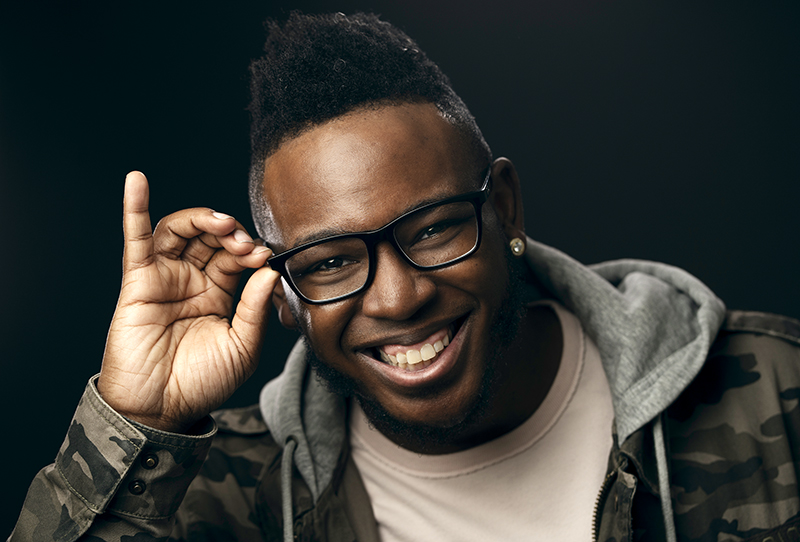 Day Peace moved from Arizona to Lake Mills with his wife, who is from Lake Mills, and worried he would not find the market for his comedy. Provided

To Day Peace, moving to Lake Mills did not seem like a smart career move. He thought northern Iowa was not prepared to offer him what he needed to succeed at his job: laughter.

“I was just convinced I was not going to be able to do comedy in this area and this market,” Peace said.

Originally from Detroit, Peace moved to Minnesota for college and dropped out after 30 days. He moved to Iowa for a job and met his wife, a Lake Mills native.

They lived in Arizona for six years — one year longer than the five-year plan, Peace said, and though he said comedy was going well for him there, they moved back to Lake Mills to raise their children near his wife’s parents.

In a new market, “it’s almost like starting all over again,” Peace said.

He said it took about five years for him to know who he was as a comedian — funny, honest, creative — and to develop his niche.

“I think doing stand-up comedy, especially in 2019, you have to be a tad bit adventurous, so I would say risky as well,” Peace, 34, said of his comedy.

He did a tour called “Everything Offends Everyone” based, he said, on the concept that no matter what the topic, something seems to rub somebody the wrong way. The majority of his content focuses on his family. Peace is black. His wife is not.

“I think when I’m explaining or just sharing my story and my experience, that sometimes can come off to be a little like, ‘Oh, I can’t believe he said that’ or ‘I don’t know how I feel about that,’” Peace said.

It’s a touchy topic, he said — race issues, interracial marriage and interracial children — but it’s one he knows well and deals with personally.

This is the risk: to want to make light of or make jokes about a lot of different topics labeled “You can’t talk about this.”

‘Could I do comedy?’

His first time on stage was at Acme Comedy Co. in Minneapolis at 27 years old.

“I’ve always wanted to do comedy,” Peace said. “It just became, ‘Could I do comedy?’”

He became serious about comedy when he moved to Arizona. Comedy is his full-time job, Peace said.

“Doing it, I haven’t really looked back,” he said. “It felt right.”

“I think the first challenge was, ‘Where am I gonna do comedy?’” Peace said.

He doesn’t turn down many gigs because he said he knows he has to “get out there” to grow himself and as a brand. He estimated his gigs are split evenly between larger and more rural communities.

“I’ve been able to set up roots in some of these smaller areas,” Peace said.

He has performed at the brewery in Lake Mills and does a monthly show at Mason City Brewing, and every show he has produced this year — larger shows, often with other comics included — has sold out, Peace said.

He’s not looking to move onto TV or movies just yet (though a Netflix special is a fair end goal “because everyone gets one of those now,” Peace said).

What’s next is more — just more.

He wants to support his family with comedy, he said, and to be paid to do comedy for the rest of his life.

“I don’t necessarily need to be famous,” Peace said. “Fame would be great, but the money would be even better. But ideally, it would be just being able to do this as frequent as I would love to do it.”

And before Jerry Seinfeld was Jerry Seinfeld and before Kevin Hart was a Kevin Hart, they were Day Peace: a live performer in need of local support and about which people can say, “I knew him when,” Peace said.

Some of that acknowledgement came recently from Lake Mills with its invitation to have Peace as emcee of Little Mr. and Miss July Jubilee and host of PopRocks band. This was his first time as a part of the event.

“Lake Mills (has) definitely embraced me, which I didn’t think was possible,” Peace said. “And being a pat of July Jubilee was actually a huge honor.”

A few years short of a decade performing comedy, Peace is still holding on to the hashtag he coined as his introduction to comedy: #funnyandblessed.

“The thing about funny is everybody is funny,” he said.

He said he understands that he is fortunate to be sharing, and making people laugh, and to still be doing it.

“It’s a blessing to have this as a career,” Peace said.

Mason City Brewing: At 8 p.m. the second Friday of every month, Peace — and other comics he brings in — will do a free show Peace referred to as an “appetizer to comedy.”

FOX 103.7: Once a month, Peace hosts a week-long “pubcast,” or podcast for radio, where he and some guests talk about topical issues and have a laugh together. The show airs at 6:30 p.m. Monday through Friday with a different topic each day. This month, his segments begin Monday.

Comedy on Fleek: Come for a surprise guest lineup presented by Peace as “Comedy on Fleek.” The show is at 8 p.m. Sept. 21 at The Main Event in Mason City. Tickets are $15 in advance and $20 the day of the show.

Petty for a Reason, Part Two: Part one sold out, Peace said, so his strategy was to do more of what was already working. Peace and guest comedians Bernard Bell and KZ will present an interactive comedy show in which the audience suggests topics for the comedians to explore. Part Two is Aug. at 9 p.m. at Surf District in Clear Lake. Tickets are $15 in advance and $20 the day of the show.