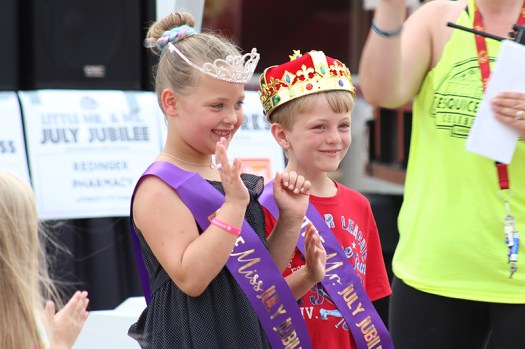 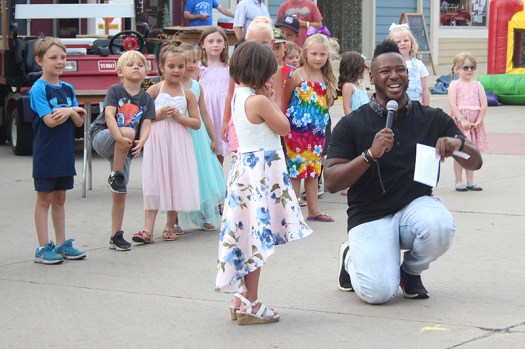 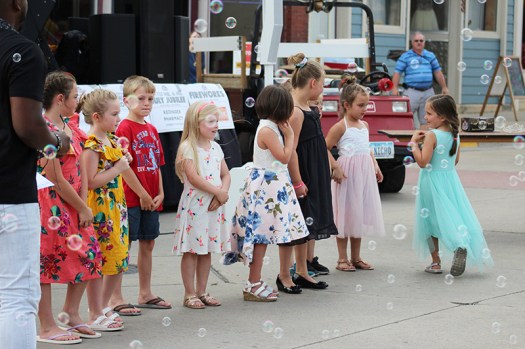 Participants in the Lake Mills Little Mr. and Miss July Jubilee contest come up to join the others as their names are called Friday night. - Sarah Kocher/Albert Lea Tribune 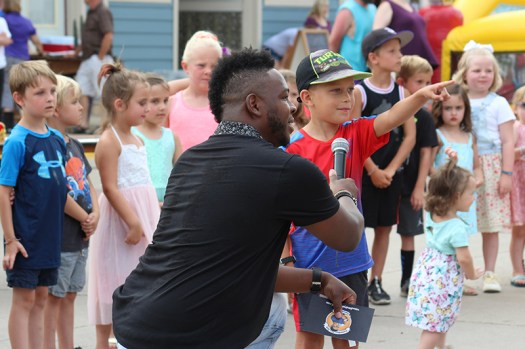 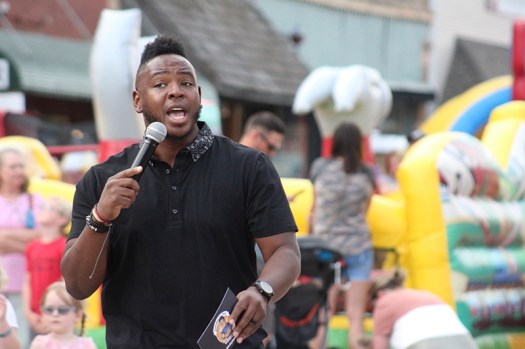 LAKE MILLS — Lake Mills is the home of royalty after two children were bequeathed the titles of Little Mr. and Miss July Jubilee on Friday night.

Just over 20 children between the ages of 4 and 8 years old participated in what Lake Mills Chamber Development Corporation Executive Director Cassie Johnson said is referred to as a contest, but is really a random name drawing among participants. The competition is part of the larger July Jubilee, an annual celebration, as the city also celebrates its sesquicentennial.

Comedian and Lake Mills resident Day Peace emceed the event, asking each child a question: If your dogs could talk, what would they say? What would you name your pet dragon, and why? If you could ban one vegetable forever, which one would it be? What would you spend $1 million on?

Candy, it turns out.

The turnout was standard for what the contest usually draws, Johnson said.

“I think it’s something fun for families to do and see their kids up on stage — create some memories for some of those young ones to look back on fondly on July Jubilee,” Johnson said.

For Alyssa Miller, who entered her 4-year-old son, Spencer, in the contest, there were memories of her own crowning: She won Little Miss Woden when she was her son’s age.

“It just seemed like something fun, and he’s a drama king, so I thought he’d be good at it,” Miller said.

“I can’t believe I won, mommy!” Vivian said, walking up to her mother after the event.

Participating in the Little Miss competition was Vivian’s idea, said her mother, Shelby Dietrich. Her daughter heard of the event from her friends.

“‘Mom, I have to do this,’” Shelby Dietrich said Vivian told her.

Erin Brandenburg, Tommy’s mother, said her son is excited to represent the town.

Both children will ride in the parade Saturday as Little Mr. and Miss July Jubilee.