Lila Harriet Highby Esse was born Aug. 31, 1918, to Alfred and Marie Highby at their homestead in Cottonwood County. 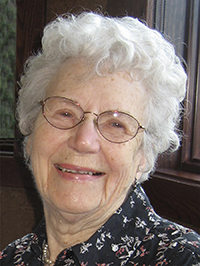 Lila was a remarkable woman, a true daughter of the prairie, growing up near Revere. During her teen years, she suffered the loss of her parents to the encephalitis epidemic of the 1930s. She helped maintain the family homestead during World War II, and later became a school teacher.

Lila met the widowed Carlyle Esse, principal and teacher at Walnut Grove High School, and they married June 6, 1948. She was a loving mom to his children Bob and Anne, and the family later grew with the birth of Lila and Carlyle’s son, Rick. In 1951 they moved to Hayward, Carlyle’s hometown, and began a successful new career as grocers. Esse Grocery supported the family in the ensuing years.

After Carlyle passed away in 1986, Lila continued as an active member of the Hayward community, involved in activities at Hayward Lutheran Church, playing cards with friends and having coffee at the local shop.

In 2011, at the age of 92, she moved to Northfield and Northfield Retirement Community to be closer to her children. “Who ever thought we would all end up in Northfield,” she would say.

She was creative, curious and caring. An exceptional quilter and knitter, her award-winning works could be seen at the Minnesota State Fair and Freeborn and Rice County fairs. Lila was an avid reader; by most counts she read three or four books a week. “Lila Hats,” her favorite knitting pastime, are worn around the globe, from the homeless population in the Twin Cities to friends in Mexico, Germany and the Czech Republic. Her routine question was, “Can you get rid of some more hats?” Then she would present a bag with a dozen of her creations for distribution.

She was preceded in death by her parents; husband, Carlyle; son and daughter-in-law Robert and Ann Esse; brothers Lewis, Norris and Russell Highby; and sister, Eleanor Iverson Bakken.

A celebration of Lila’s life will be 10 a.m. Aug. 3 at Northfield Retirement Community Chapel. A private family burial service will be at Hayward Lutheran Church Cemetery.

Lila’s family would like to thank the staff at Northfield Retirement Community and the Allina Hospice team for their wonderful, caring support.