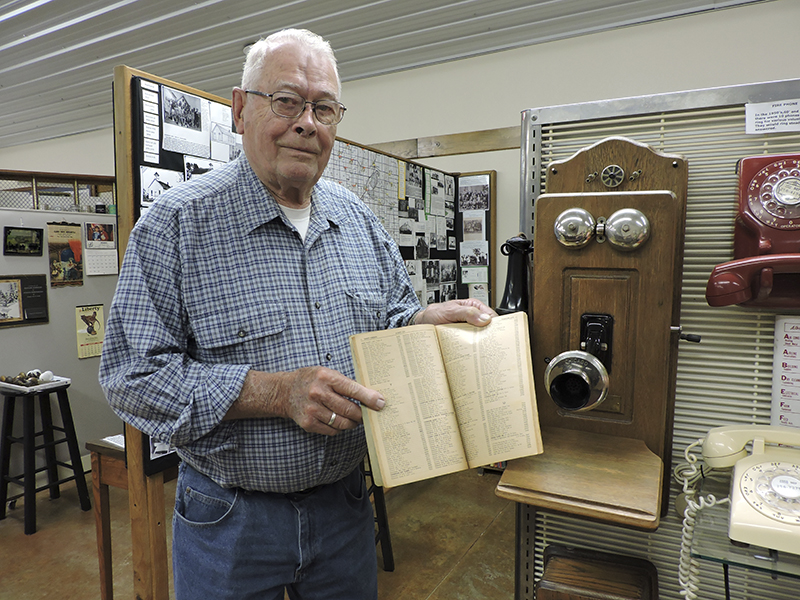 Everett Jensen stands next to a wall phone and holds open a phone book that lists the four-digit phone numbers people in the area could use to call one another. - Kelly Wassenberg/Albert Lea Tribune

CLARKS GROVE — Kathy Jensen and Everrett Jensen said they’re not quite sure what it is, but people seem to become more interested in preserving history as they get older. That was the case for the two of them, who played active roles in opening the Clarks Grove Area Heritage Museum.

The museum itself has been open for four years, but the desire to make that dream a reality started decades earlier, they said.

Kathy Jensen and Phyllis Hanson started the Clarks Grove Heritage Society and had been collecting items in their garages and attics, waiting to give them a permanent home. Over time, Everett Jensen started storing items at his place, as well. 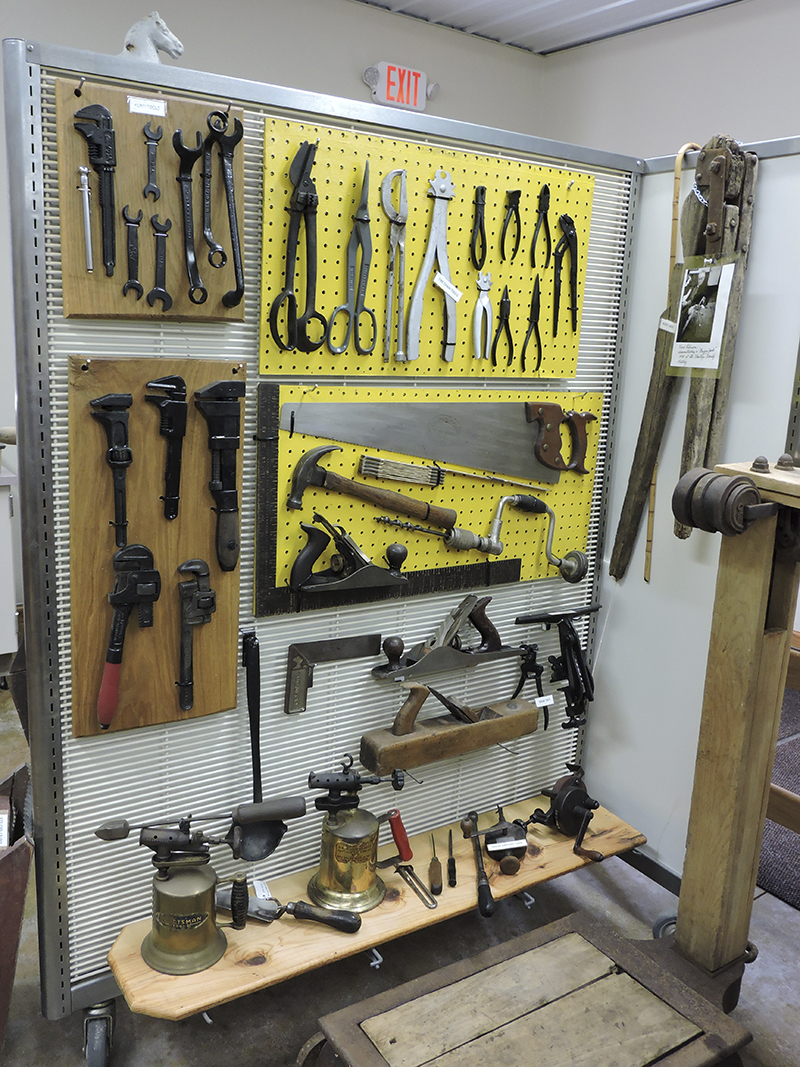 A set of tools at the Clarks Grove Heritage Museum was provided to those who purchased Ford Model A or Model T cars. – Kelly Wassenberg/Albert Lea Tribune

“We had looked forward to having a space for 20 years,” Everett Jensen said.

“We looked at different buildings, but they were out of our reach,” Kathy Jensen said.

In 2013, the group hosted a pancake breakfast fundraiser and sent out fliers asking for donations, which brought in over $30,000.

“I thought so,” Kathy Jensen added.

“The most important part was the cooperation of the city,” Everett Jensen said. “The city stepped up and really helped. It is their building and we contributed, but it was very important that they were on board.”

The city provided approximately $70,000 to finish the project, which included office space for the city clerk, who just so happened to be Kathy Jensen. Prior to the museum, she worked from her home, as did her predecessor.

Construction of the museum began in June 2014 and heritage society members stocked the building over the winter months. The museum opened the following June.

Hanson, who was in frail health at the time, watched from her car as Kathy Jensen was given the honor of cutting the ribbon at the museum’s opening.

Hanson has since passed on, but the fruits of her labor live on in the museum, and the dedication to keep it open lies with the members of the heritage society she helped start.

When the Clarks Grove Fire Department was rebuilt after the March 2017 tornado that struck the city, an office space was made for a clerk there as well. By choice, she remains at the museum.

“I like it over here,” Kathy Jensen said. “There’s more light and you can see who’s coming in.” 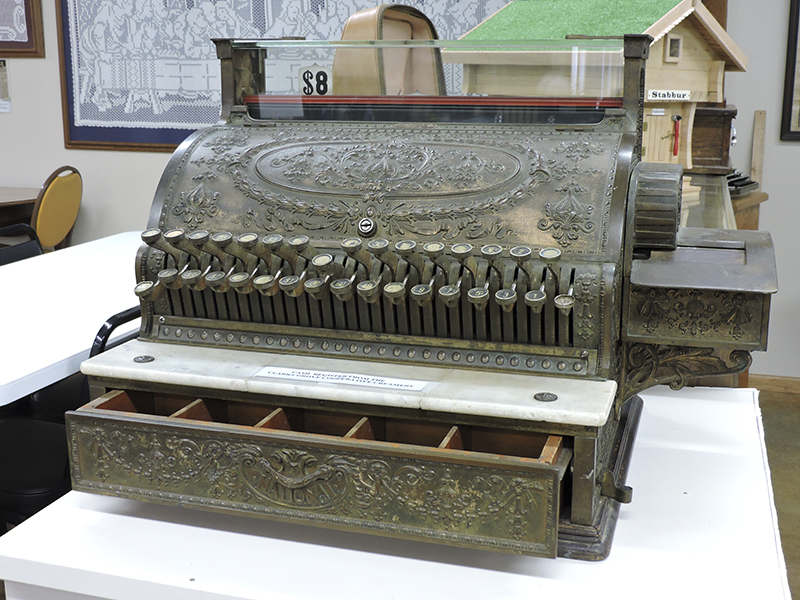 This 1908 cash register on display at the Clarks Grove Heritage Museum came from the local creamery. – Kelly Wassenberg/Albert Lea Tribune

And she occasionally gets a visitor who doesn’t need her services, but just wants to look around.

Almost everything visitors can see has been donated.

“The only thing we’ve purchased is fixtures,” Everett Jensen said.

The rest of the items have been donated or loaned out to the museum.

When an item comes in, it is assigned a number. It is then photographed and catalogued with information about the item, including the donor’s name, Everett Jensen said.

One of the newest pieces the museum has on display is a photo of Anna Petersen, which is displayed in a shadow box along with a wreath made of Petersen’s own hair. While it remains unknown whether or not the wreath was made while she was living or after she passed, hair art was at its height in the Victorian era, which would have ended 18 years prior to her death.

According to “Self-Instructor and the Art of Hair Work, Dressing Hair, Making Curls, Switches, Braids and Hair Jewelry of Every Description,” published in 1867 by author Mark Campbell, the work used on the piece is referred to as gimp work. Individual strands of human hair would be tightly wound around thin wires in loops over and over again. The wire would then allow the hair to be molded and shaped into various designs, flowers being among the most popular.

The museum also features photos and memorabilia of old businesses — such as the local creamery and Clarks Grove School, and household items, including a stove and  phonograph from the early 1900s.

Displays are changed over the winter months when the museum is closed. 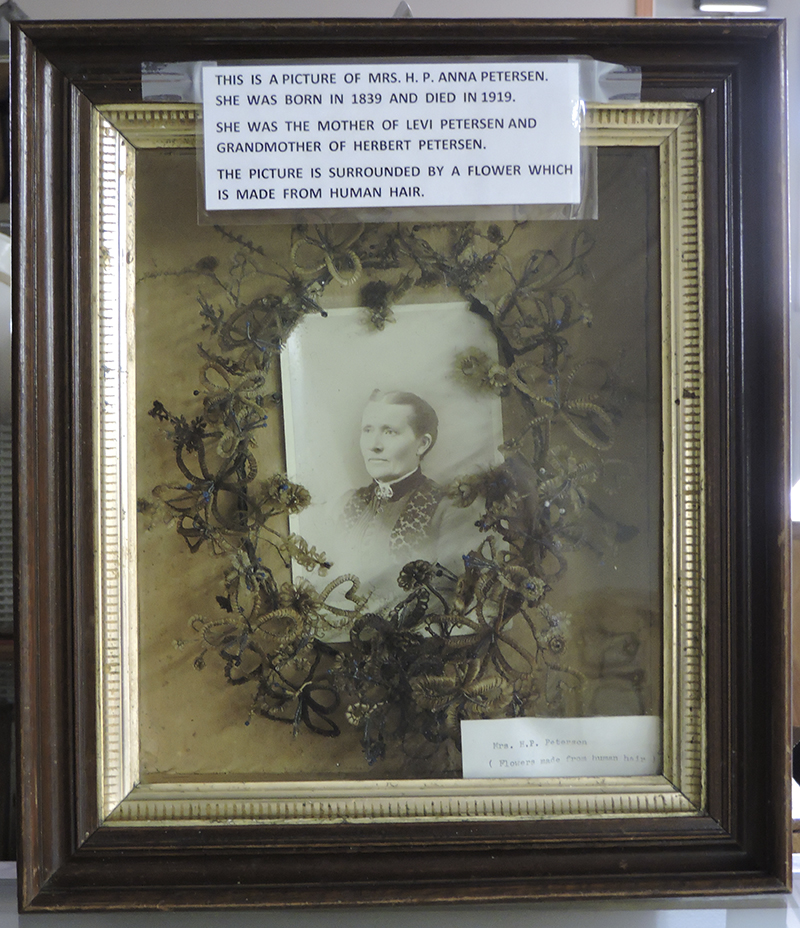 A display featuring a picture of Anna Petersen (1839-1919) also contains a braided wreath made of human hair. These pieces of art were popular during the Victorian era. They were made for cherished loved ones while they were still living, but were also used as memorials for those who had passed on. – Kelly Wassenberg/Albert Lea Tribune