On to the next bite 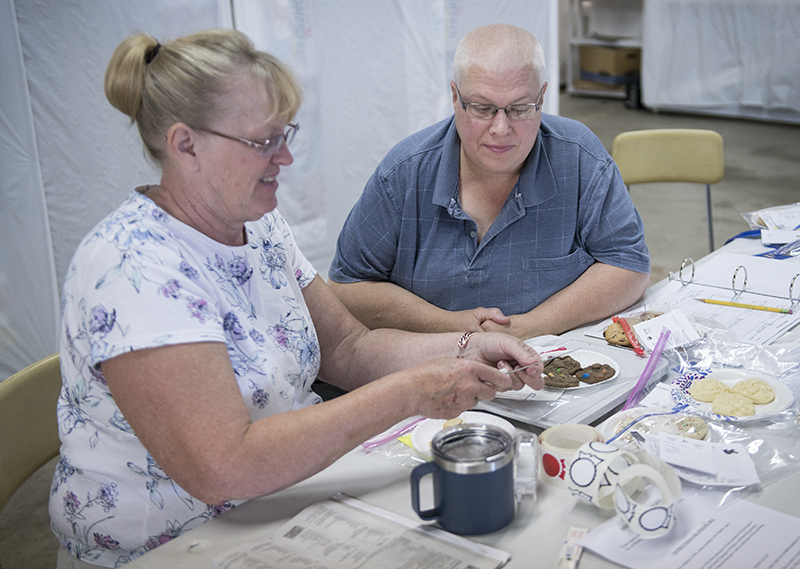 Behind the scenes with food judges at the Freeborn County Fair

At 11 a.m. Monday, purple champion and violet reserve champion ribbons sit in a pile on a plastic table in the back of the Creative Arts and Foods Building at the Freeborn County Fairgrounds, waiting to be awarded. On top of the stack sit a few plates of cookies, already judged and short-listed for the ribbons underneath.

Doug Krueger and Lori Reyerson sit at the table with serious expressions on their faces. Krueger pulls a trio of ginger snap cookies out of a quart-sized plastic bag.

“The recipe says snaps,” Reyerson said, her words almost stolen out of the air by the loud fans pushing air through the arts and crafts building. “It should snap.”

Krueger and Reyerson are responsible for judging 20 of the 33 classes in the Healthy Eating category, with each class containing anywhere from three to 16 lots. (As further divisions of each group, lots, for example, separate pies into apple, blueberry, cherry, mince meat, peach, raisin, rhubarb, strawberry, unfilled pie crust and other.)

In between tastes, the judges drink only water — never coffee or pop, which Krueger said could taint the tongue.

“We want to keep our tongues pure, you know?” he said.

Sometimes, however, he might have a protein palate cleanser. Last year, he took a hamburger break.

“I didn’t eat the bun, of course, because we just had buns,” he said.

This is Krueger’s fifth year as a judge. He said he started after Creative Arts & Foods Superintendent Mary Ann Allison — an organist for the church he attended — asked him to.

“It was a thing on my bucket list,” Krueger said. “I always thought that would be fun to be a judge.”

Krueger owned a restaurant, Puj’s Corner Cafe, in Emmons for eight years, and at the same time had Puj’s Family Inn and Pizza Parlor in Lake Mills for four.

“That was another thing that was kind of neat about judging food, was I had gotten out of cooking,” Krueger said.

He thought judging might be a way to get back into it.

“Who knows?” he said. “You might find a neat recipe while you’re there.”

“You can take a recipe and you can follow it just the way it says, but it can turn out differently when you make it or I make it just because of the way, you know, you interpret it.” 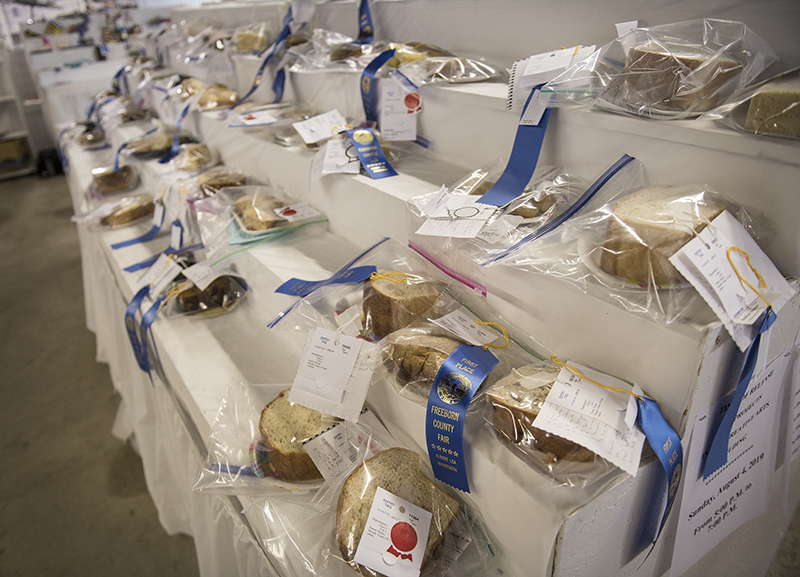 Additionally, because the category is deemed healthy eating, the judges are also looking at how entrants take a normal recipe and make it healthy. When people go on a diet, Krueger said, cookies and cakes are usually the first things to go.

“But what if we make it healthy?” Krueger said.

Baked products in the healthy eating category are judged based on their appearance, lightness, tenderness, texture, moisture content, flavor and aroma.

“There’s a smell to good bread,” Krueger said. “You think back to grandma’s kitchen, you know, and she’s baking bread.”

There are some things that can separate entries. Are they using fresh ingredients or something that’s been in the cupboard for a while? For instance, baking powder can lose some of its power to give rise over time.

A full salty-sweet ingredient salt will also be apparent.

“If you put salt instead of sugar, it really changes the taste,” Krueger said.

He said the accidental switch happens about once a year.

For the younger participants — one class is exclusively for 15 and under — Krueger said he will write notes about their baked goods so people don’t get discouraged from returning to the fair.

“We want them to come back and try it again,” he said.

He encourages not only young people, but Freeborn County residents in general to consider participating in the fair.

Krueger himself likes to come back.

“I look forward to it,” he said of the fair.

According to Allison, between half and three-fourths of the judges return.

Though he moved away recently, Krueger grew up on a hobby farm outside Albert Lea. He was involved in 4-H. The fair is his vacation now. Albert Lea is his hometown.

“The Freeborn (County) Fair is very important to me,” he said.

After tasting them — and establishing snap — the ginger snap cookies join the small group atop the stack of purple ribbons.

For Krueger and Reyerson, it is on to the next bite. 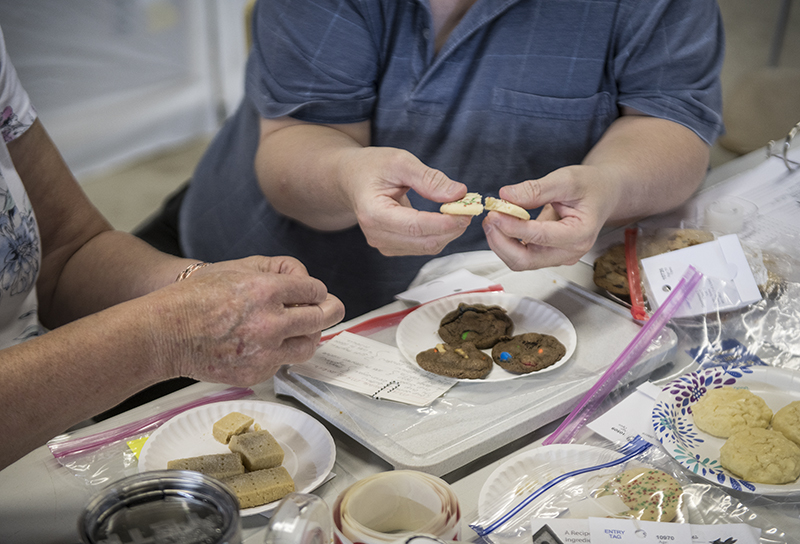 Krueger and Reyerson are responsible for judging 20 of the 33 classes in the Healthy Eating category, with each class containing anywhere from three to 16 lots. – Colleen Harrison/Albert Lea Tribune