Memorial services for Pamela Slette of Albert Lea will be at 10 a.m. July 20 at the Bonnerup Funeral Service chapel in Albert Lea. The Rev. Daphne Hamborg will officiate. Friends may greet the family one hour prior to the service at the funeral home. 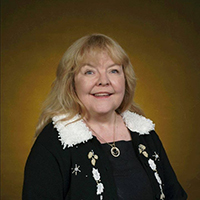 Pam passed away suddenly at her home of natural causes Friday, June 21, 2019, in Albert Lea.

She was born April 14, 1954, at Naeve Hospital to Dorothy and Curtis Slette. She grew up in Albert Lea and was an active member of First Lutheran Church. She graduated from Albert Lea High School and attended Augsburg College and the University of Minnesota.

She returned to Albert Lea in 2003 to care for her mother, Dorothy, until her death in 2011. While in Albert Lea, Pam worked as a personal care assistant for Helping Hands, at Southeastern Minnesota Center for Independent Living and in the kitchen at the Catholic church.

Pam’s passion from a young age was music. She was a music student and a gifted singer, who shared her talent in choirs, First Lutheran Church’s Worship in Jazz, and at many weddings, funerals and recitals.

Pam was preceded in death by her parents.

Memorials are preferred to the Humane Society of Freeborn County.