Playing is ‘such an honor’ 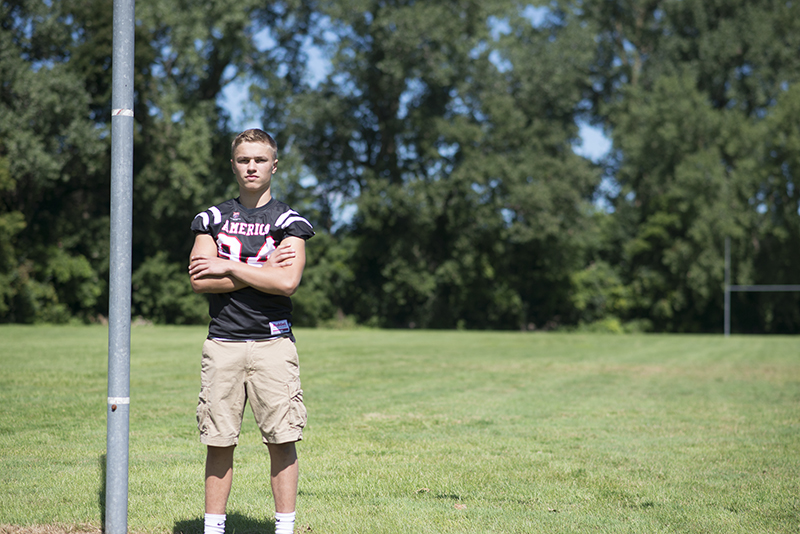 Incoming Albert Lea freshman Luke Moller recently played in USA Football’s Middle School Bowl Game Series in Canton, Ohio. The event included a four-day camp and culminated in a game featuring some of the most elite middle school players from all over the country. - Tyler Julson/Albert Lea Tribune

Before the start of football season this fall, incoming Albert Lea High School freshman Luke Moller got a taste of the action a little earlier than most players. After a series of tryouts in Savage, Moller was selected to represent USA football in the Middle School Bowl Game Series.

Moller learned about the opportunity from a friend who tried out last season. After talking about it with his friend, Moller decided to give it a shot. The tryout stage was two days-long, which Moller described as a two-a-day practice scenario complete with footwork drills, speed and quickness training, ball reading skills and more.

Once Moller learned he had made the team, there was still work to be done before the four-day camp and game in Canton, Ohio. He trained in Albert Lea for the month in between, working on footwork drills and other things that could be done alone.

Moller talked about what it meant to him to be selected for the team.

“It’s such an honor,” Moller said. “Out of all the kids that tried out, there are so many and they just pick a select few. To be one of the kids they picked is pretty crazy.”

Once in Canton, Moller had four straight days of practicing. He said they woke up at 7 a.m., went to a four-hour practice before lunch, studied film for two hours after lunch and finished the day with another four-hour practice and everything coming to an end around 7 p.m. According to Moller, the early morning wakeup calls were the hardest part of the whole thing, but it was all worth it in the end.

“Just making it and knowing that I’m improving at all times is worth it,” Moller said. “And just playing at such a high level with elite competition.”

“It was just so cool,” he said. “It was the real deal and it was such an intense game. There’s no one out there who doesn’t know what they’re doing. Everyone knows and it was very high paced.”

Moller’s passion for the game runs deep and was passed down to him by his father.

“Me and my dad have been in love with it since I was little,” he said. “We throw the ball around all the time and watch every game — Sunday, Monday, Thursday, everytime.”

As an incoming freshman, Moller will be a part of the group that will welcome in the new Hammer Complex and will be on an Albert Lea team that will have high expectations over the coming years as the Tigers program continues to build momentum.

Albert Lea’s first varsity home football game is scheduled for Sept. 13, when it hosts the Spartans of Rochester Mayo.