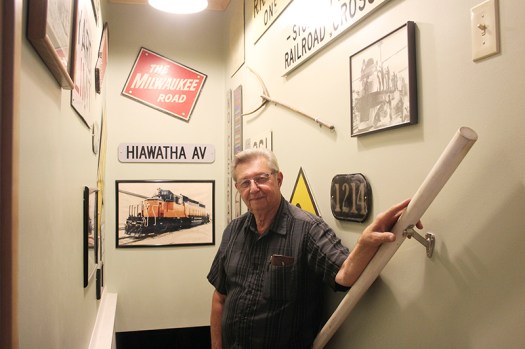 Jerry Monson decorated the stairway down to his basement with memorabilia from The Milwaukee Road, including speed limit signs, photos, semaphore equipment and train numbers. - Sarah Kocher/Albert Lea Tribune 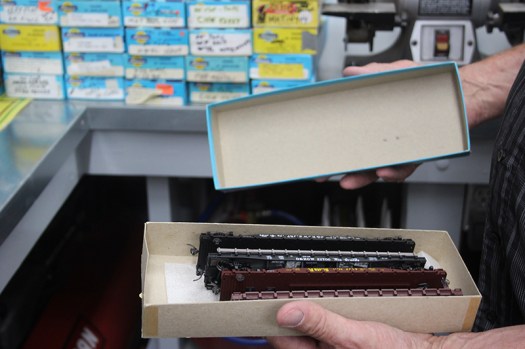 Monson recently purchased another hobbyist's train collection. He stacks the boxes on his workbench for testing and pricing and works his way through them. - Sarah Kocher/Albert Lea Tribune 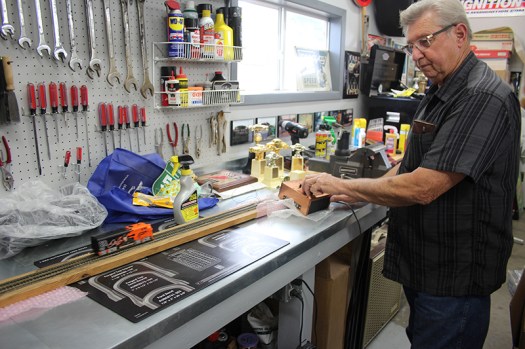 Jerry Monson demonstrates for a photo the track he uses to test locomotives he buys. He then prices and sells them for the 18 train shows he attends yearly. - Sarah Kocher/Albert Lea Tribune

If train-collecting were a disease, Jerry Monson would be very, very sick.

That’s how he — and his wife, Monson said — refer to his longtime hobby, which has filled a good chunk of his garage, workshop and basement.

“It gets to overtake you after a while — in a good sort of way,” Monson said of his hobby.

In his personal collection, Monson estimated he has around 700 and 800 passenger and freight cars, as well as at least 100 locomotives.

The inventory he maintains to sell has another 700 to 800 cars, and in addition to it all, he has diecast vehicles, scenery pieces and buildings both for sale and for keeps.

His basement is full of boxes he has yet to unpack, Monson said; that’s where most of his personal collection is. Though he considers track-laying one of his specialties — he prides himself in being very particular with joiners so the track is straight and lines up well — he said he hasn’t had the time to set up in his home yet since moving there five years ago.

Those who participate in this pastime have the opportunity to practice several skills associated with model railroads, Monson said. Hobbyists may utilize carpentry, electrical know-how and artistry.

“There’s just a multitude of things that you can do,” Monson said.

Now, Monson attends 18 train shows a year to sell. But his first train was a gift: a Lionel train set he received at 8 years old in 1953. Trains for Christmas and birthdays then were like computer games now, Monson said.

“I still have that train,” he said.

He also has old movies his mother took of him when he got it.

“I remember the big old Kellogg’s Corn Flakes boxes when I couldn’t wait to get one empty, because I would cut the seam and turn it inside out so it was just gray cardboard, and I’d make buildings out of that,” Monson said.

He took a few years away from it until he settled back down. He had the memories of fun with his train from childhood, and it was a relaxing hobby.

“All the trains came back out of the box again,” Monson said.

At one time, Monson owned a hobby shop from which he peddled his trains. He still holds on to the name, North Star Trains, that he sells under. The name came from a passenger train that came up through Albert Lea on the Minneapolis & St. Louis Railroad, Monson said.

He returns to shows year after year, and sees people in the same areas who come back as well. The vendors at most shows are like a family, Monson said, and he has made new friends — including former Minnesota Vikings defensive end Carl Eller — through the hobby.

“It attracts all kinds of people, and that’s what makes it interesting,” Monson said.

Monson also organizes and runs the annual model railroad show and swap, which has been in Albert Lea for over 20 years.

On his work bench at his home, Monson has a test track on which he runs trains he purchases from others’ collections. He sorts and prices them for future sales. However, he said he doesn’t rely on selling the trains for his income.

The walls on the way down to Monson’s train-stuffed basement are lined with railroad memorabilia as well, largely from Milwaukee Road — officially the Chicago, Milkwaukee, St. Paul and Pacific Railroad. There’s a mile marker sign, a train tag, speed limit signs, semaphore equipment, no trespassing and danger signs. Not all model train collectors are real railroad lovers, Monson said, but many are — himself included.

Trains were a big deal when he was a child, Monson said. He likes seeing the excitement in children now, when he sells, or sometimes gives, trains away. But when he goes through his own collection, he still gets some of that feeling himself, recaptured from 1953.

“I can go downstairs and just look through boxes of stuff and remember what I’ve got and it’s just, it’s like Christmas,” Monson said.

Interesting fact: Monson has many interests, including not only model railroads but also racing and John Wayne