People who live along southern Minnesota rivers are bracing for more rising water. Forecasts say rain will continue throughout the rest of the week including on Independence Day.

For 20 years, Dale and Karen Kuisle have lived about 1,000 feet south of the Zumbro River.

“My kids grew up here, they go back it’s a stream most of the time and catch crawdads,” Dale Kuisle said. “It’s very beautiful.”

But the task at hand Monday evening wasn’t pretty. Kuisle’s clothes were soaked as he and his wife dumped and distributed more gravel along the flooded driveway. It’s the worst he’s seen in his years living along the river in Byron, near Rochester. 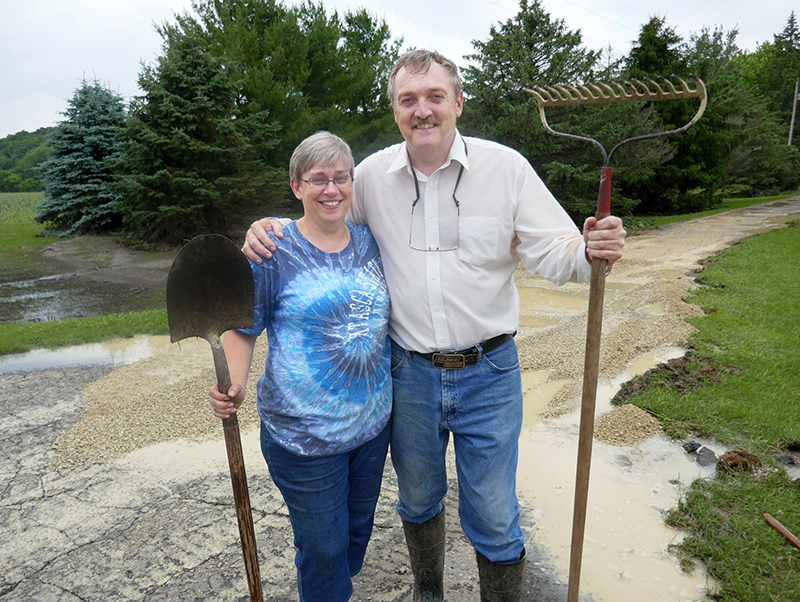 Dale and Karen Kuisle live 1,000 feet from the Zumbro River. On Monday they were dumping in more gravel that had been washed away, so they could use their long driveway. They’ve lived there for 20 years and said this has been the worst flooding they’ve experienced. – Nina Moini/MPR News

“As far as our roadways are concerned we try to just keep an eye on them with our deputies that are working the street and if they find any issues then we contact public works and get it barricaded,” Wallace said.

The first days of summer have brought even more rain. Last week, water levels rose to major flood stage along the Zumbro River after storms brought more than a half-foot of rain in the area.

“We will probably see more again Wednesday night, more again Thursday night into Friday then some more again on the weekend,” Schmidt said.

Phil Leversedge has noticed the same pattern on the Minnesota River, and at Fort Snelling State Park near the Twin Cities.

“We’ve been like a yo-yo at Fort Snelling with water coming up, then going down, then coming up again,” said the deputy director of the division of parks and trails for the Minnesota Department of Natural Resources.

Leversedge said the Minnesota River is likely on the way up again.

Fort Snelling State Park will remain closed for Independence Day because there’s silt over trails as well as other damage to address.

In southern Minnesota, Leversedge said the Root River State Trail was flooded in places. The DNR is checking the paved trail to make sure the “surfaces themselves are recoverable and ready to open by the Fourth of July.