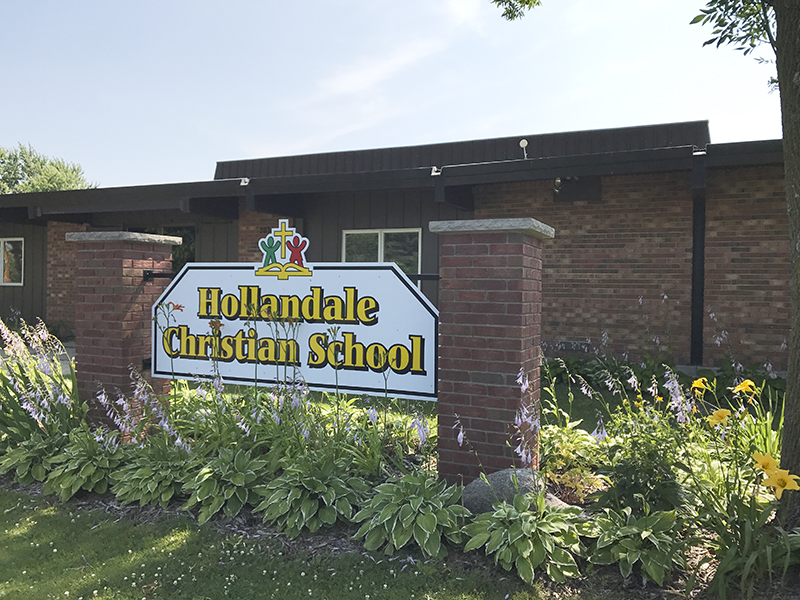 Hollandale Christian school will have a new principal this school year with the retirement of Enno Haan. His replacement, at least in the interim, will be the Rev. Matt Hundley of Albert Lea Vineyard Church. - Kelly Wassenberg/Albert Lea Tribune

HOLLANDALE — Nineteen years ago, Matt Hundley was asked to be an interim pastor at Albert Lea Vineyard Church over the summer months. He accepted and brought his wife, Robin, and their four children to Albert Lea, and never left. 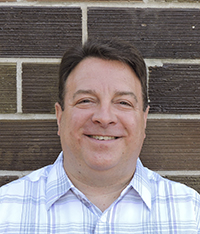 “It felt like God was speaking to us — that we should stay here and finish what we started,” Hundley said.

The situation turned into a running joke between him and his wife, that God played a trick on them to bring them to where he wanted them to be.

Answering the call to Albert Lea meant leaving behind his teaching position in Waterloo, Iowa, where he had taught for seven years. In the years since, he has served as church pastor and at times as a substitute teacher, but even when asked, he didn’t feel the pull to return full-time to his old vocation.

This spring, something changed.

“There had been this change in my heart about being bi-vocational as a pastor again, and I was considering getting back into teaching,” he said.

He considered it a calling when he heard that the position of interim principal was opening up at Hollandale Christian School while he was attending a prayer conference in Faribault.

“I contacted them because they were looking for local candidates,” Hundley said. “I said, ‘I don’t know if I’m a fit, but we can talk.’”

Hundley said he first met with the board president, Bob Richards. Then he met with Richards and the principal, Enno Haan, who would be retiring at the end of July. More meetings followed with board members and staff at the school.

“It was a fairly involved vetting process,” he said.

“The funny thing was, that I’ve been here long enough that I actually knew everyone on the staff,” Hundley said, explaining that while he knew who they were, he wasn’t aware they worked at the school. While given a tour of the facility he said he found another familiar face with every turn of a corner.

The timing of his thoughts of returning to an educational position and the opening of the position at the local Christian school was more than a coincidence, he said.

He was also compelled to take the interim position because of the transition.

“The need seemed to be for someone who was maybe more pastoral, as opposed to someone more administrative,” Hundley said. “Though that’s still a component of it, it seemed as if what the school community needed in this season was someone who could just love on folks and work on the sense of community and kind of hold us together.

“As we talk about unity within the scriptures, it talks about this blessing comes when people dwell together in unity,” he said. “God actually commands a blessing there and so, I feel like that’s one of the things I’ve been gifted in is being a unifier — being someone who can relate to lots of different kinds of folks.”

Considering the students of Hollandale Christian School represent about 20 different Christian denominations, that’s an important component of his job, he said, and he hasn’t been given a road map to follow through this interim period.

He said the directive has been to do what the Lord leads him to do in terms of helping shepherd the community as the school is in this transition phase between principals, and then take care of the administrative tasks Haan fills him in on.

He has been working side-by-side with Haan trying to absorb all the knowledge the principal has learned in his 37-year career in Christian education.

“He’s been sharing his vast experience,” Hundley said of the principal. “He’s trying to feed me with his wisdom and it’s kind of like a firehose and I’m trying to catch it in a Dixie cup. I’m a little overwhelmed.”

Any anxiety he has had is trivial compared to his level of excitement, he said.

“After my initial meeting with the staff, I came home and I told my wife, ‘I am so jazzed about this coming school year, because this staff is terrific.’” he said. “They are passionate, they are very organized and they really work well together. I was amazed at how the conversation we had together unfolded as they talked and they collaborated.”

He said he looks forward to turning the staff loose and letting them be who they are, and joked that he hopes he doesn’t do anything to mess it up.

“The expanding community feel is something I cherish,” he said. “That’s one of the things I love about Albert Lea. The churches here work together in the summer, like with Shinefest in May. So this is just another step of getting to know the larger faith community and really sharing in a relationship together.”

Hundley noted that centered in the middle of Hollandale Christian School’s name is the root word — Christ.

“Really, that’s the thing that unifies all of us from different faith groups, is our love for and desire to follow Christ,” Hundley said. “That’s what makes the Hollandale Christian School community unique, is that you have all these different personalities and faith perspectives, but the central person of all that is Christ. He has become central in our lives and so we want to create a place where our educational environment is focused on Christ then all the academics but kind of through a Christ-centered perspective.”

Along with his duties as principal, Hundley will also teach some math classes at the beginning of the school year.

“The plan is not to have me teach a lot — simply because of the interim tag and still needing to be doing things (at Vineyard Church).”

Hundley is unsure if the position could become permanent.

“That’s not been talked about,” he said. “I think we are all best-served if we just take this year on as a one-year journey together and then we evaluate how it went at the end. Would I be open to that? Perhaps. But I think we have to walk this path together before we get too ahead of ourselves.

“They’re still looking for full-time administrator and it would certainly be good for the school to have someone with more experience than myself,” Hundley said. “On the other hand, if it proves to be a good fit, we’ll see.”

When asked if he thinks God is playing another trick on him, he had to laugh.