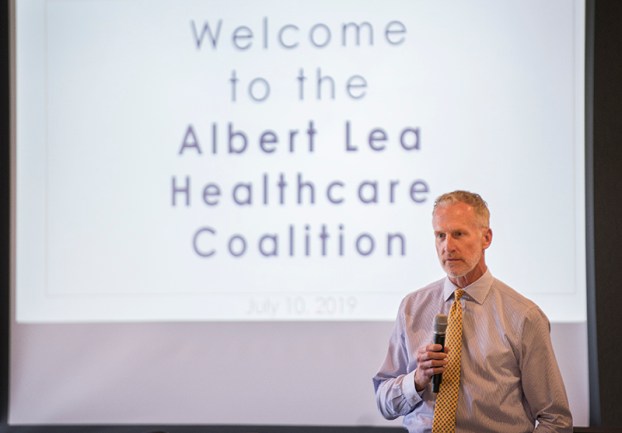 ‘We need your participation’

Leaders of the Save Our Healthcare organization on Wednesday shared preliminary plans for an alternative medical provider to come to Albert Lea and asked business leaders from more than 30 companies to jump on board with financial support.

During a lunch event at Wedgewood Cove Golf Club, Brad Arends, who has served as chairman of Save Our Healthcare, and Craig Ludtke, another leader with the organization, said they have been in talks with a medical provider interested in coming to the community.

Arends said both sides have signed nondisclosure agreements, and the name of the provider could not yet be released. The target location for the facility is the former Herberger’s space at Northbridge Mall.

Services would start with primary care and some specialty care with some limited urgent care hours.

As services progressed and patients grew, obstetrics would be added, along with an imaging center, orthopedics, general surgery and others. The fifth phase includes an ambulatory service center. Ludtke said his goal is to take that further with an outpatient surgical center and inpatient services, replacing services moved to Austin with Mayo Clinic Health System’s consolidation of services.

Though the initial projected target for the first phase was Jan. 1, Ludtke said that has likely been moved back three to four months and depends on financial support received. The organization is looking not only for business support but local citizen support and support from local governments to support the provider’s financial contribution.

An Albert Lea High School graduate has committed to contributing a seven-figure dollar amount, and the group is looking for other major donors. Arends said the donor’s name will be available after a letter of intent is signed.

“We need your participation in this,” Ludtke said to the room of business leaders. “You will be the deciding factor in whether this moves forward.”

Arends said the negotiations are the culmination of two years of work after Mayo Clinic Health System announced two years ago it was consolidating services.

He said once it was clear community and Save Our Healthcare leaders could not negotiate with Mayo leaders to keep services in Albert Lea, the focus shifted to restoring services, regaining control of medical services in the community and reducing costs.

The Albert Lea Healthcare Coalition was formed with a trio made up of city and county leaders and Save Our Healthcare, and brought in experts to study whether a full-service, acute-care hospital would fiscally survive in Albert Lea, along with another consultant who has been involved in over 20 hospital projects, including the St. Peter hospital.

They developed a request for proposals, sent it out to health systems that had expressed interest and conducted interviews with the organizations, Arends said.

The two men said the issue is of particular significance to businesses as business owners and residents face higher insurance premiums in south-central Minnesota because of a lack of competition for medical providers.

A family of four with both parents age 43 and teenage children, with a $2,200 deductible under Blue Cross Blue Shield of Minnesota would pay a monthly premium of $2,252 compared to a premium of $1,757 in Lakeville or Minneapolis. The difference over the whole year totals about $6,000.

Arends and Ludtke shared their experiences of money saved for their own businesses by switching to offering insurance where Mayo is out of network versus remaining in-network.

Ludtke said for his business, which has seven employees, he saved $42,000 alone in insurance costs by switching to this model.

If this happened across the community, the money saved could attract new businesses to Albert Lea, lower property taxes and improve schools.

The two men asked the business leaders to consider this change, and then to pledge a portion of these savings to the effort for the new provider.

They said the business leaders have the opportunity to bring services to Albert Lea and lower costs.

Mayo Clinic Health System, in response to hearing about the meeting, said it remained committed to the residents of Albert Lea, Austin and the surrounding communities and will continue to offer a range of service, “including robust emergency departments, full clinic services, outpatient surgeries and pregnancy care before and after delivery on each campus.”

“Mayo Clinic is proud to be a long time healthcare partner in the region and will continue to invest in our Albert Lea campus and the community,” the statement said. “We are working hard to navigate a challenging health care environment while keeping our focus on providing the highest quality of care to each patient for generations to come.”

Travel back in time to see Iowa ‘State Fair’