WWII veteran helped airplanes reach the sky, now one B-17 returns the favor 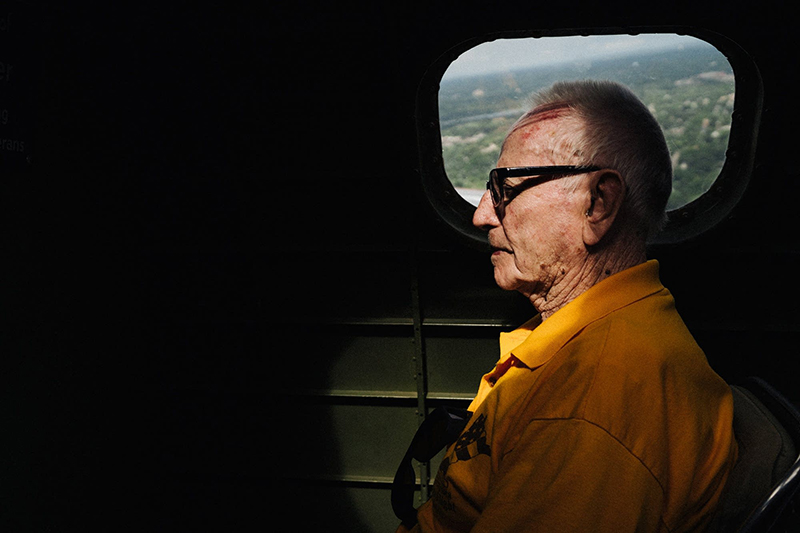 World War II veteran Andy Anderson takes a flight above the St. Croix river valley in a B-17G Flying Fortress on Thursday. Anderson was stationed in Okinawa, Japan, where he helped build the runways that B-17s and other planes landed on. - Evan Frost/MPR News

Andy Anderson was serving in the Army infantry during World War II when he heard they needed a truck driver, so he volunteered.

“That’s how I became a combat engineer,” he laughed. “They would take just about anyone back then.”

He eventually landed in Okinawa, Japan, where it was his job to work on engines and build the runways where his fellow soldiers could take off and safely land their planes. On Thursday, almost 75 years after the war ended, Anderson finally got his chance to take flight.

He and another World War II veteran soared over St. Paul, the St. Croix River Valley and back again in a B-17 Flying Fortress, nicknamed the Aluminum Overcast, one of the few remaining heavy bombers of its kind left in the world.

“It brings back a lot of memories,” Anderson said, his voice breaking. “I think of some of my old buddies that I went over with, and I was lucky to come back again.”

The Minnesota chapter of the Experimental Aircraft Association offered Anderson and other veterans a free flight on the Fourth of July. The organization is selling tickets for the public to fly through the holiday weekend.

The Aluminum Overcast’s 1,200-horsepower engines are loudest from inside the plane. Passengers stuffed plugs into their ears to block out the noise, but its power still reverberated throughout the plane. Ammo hung from machine guns soldiers would have used on the side of the plane.

Passengers could take in the view of the city and the valley below from the historic bombardier, a glass bubble on the nose of the plane that was used to take in panoramic views of combat below.

But Anderson sat quietly in a chamber behind the pilot, looking out a window during the 15-minute ride. It was much smoother than the rides he had witnessed during the war, he said afterward. 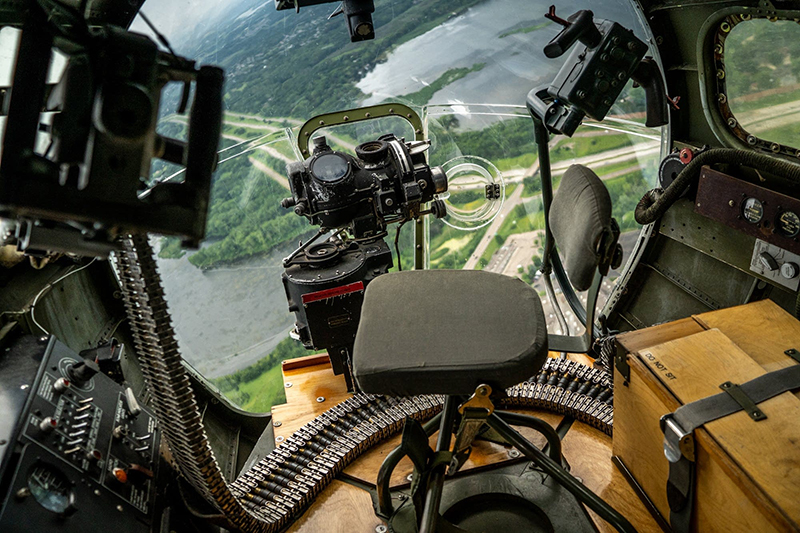 A Norden bombsight looks down on Minnesota from inside the bombardier station of a B-17G Flying Fortress on Thursday. The station on the underside of the plane below the cockpit offered the bombardier a panoramic view of the terrain below and gave them the ability to control the plane during bombing runs. – Evan Frost/MPR News

“It’s a humbling experience, when you think about all of the 18-, 19- and 20-year-olds that flew this in World War II,” said Kirk Fjetland, president of the local EAA chapter. “They flew, fought and died in these things.”

The B-17 was developed by Boeing in the 1930s for the U.S. Army Air Corps, a precursor to the U.S. Air Force, but it became critical in strategic bombings against Nazi Germany during World War II. The Aluminum Overcast is a 74-foot, 34,000-pound plane that has a cruising speed of 170 mph.

It was delivered to the Army on May 18, 1945, 10 days after the war in Europe had ended, and didn’t see any action for the rest of the war. It was bought in 1946 from surplus military inventory for $750. Since then, it’s flown more than a million miles, with stints as a cargo hauler and a pest control and forest dusting plane.

In 1983, the Aluminum Overcast was donated to the EAA, which performed an extensive restoration. It took 10 years and thousands of hours to bring the plane back to its original state. The military equipment that had been removed after the war had to be replaced. The radio compartment had to be rebuilt. And a complete replica of the plane’s top turret had to be installed just behind the pilot and copilot seats.

Rex Gray, a Vietnam War veteran and pilot, flew the plane Thursday. He said the B-17 is much more challenging to control than more modern planes, and requires special training to fly. He volunteers around the country to take veterans on rides — in large part, he said, to see their reactions.

“It’s incredible to see them to come out and go from 95-year-old, bent-over, shuffling guys to walking tall,” he said. “It brings them right back, it’s like they’re 20 again.”

Anderson’s path into the military wasn’t like most of his friends’ and neighbors’. He had several deferments during the war because he worked on his family farm near Albert Lea.

At 20, he joined the Army, and not long after, became an engineer. He never saw combat, but he saw plenty of death: planes crashing in bad weather, and comrades hit by beach mines.

Anderson got out after the war, and said he’s grateful. He moved to Owatonna, married, started a family and ran his own service station with a friend, fixing cars. His unexpected stint as an army engineer led to a lifetime of fixing things. 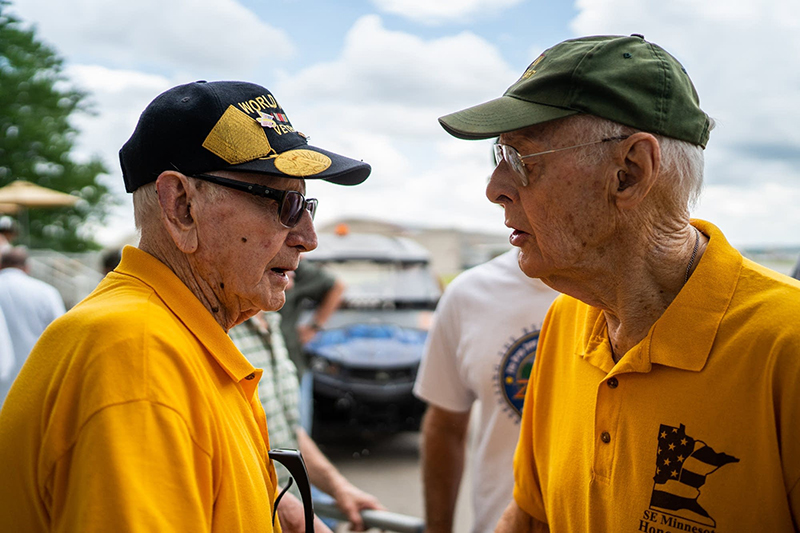 World War II veterans Andy Anderson, left, and Ken Schutt greet each other before taking flights in a B-17G Flying Fortress at Holman Field at St. Paul Downtown Airport on Thursday. Anderson was a combat engineer in the Army and Schutt served in the Army Air Force Air Transport Command. – Evan Frost/MPR News