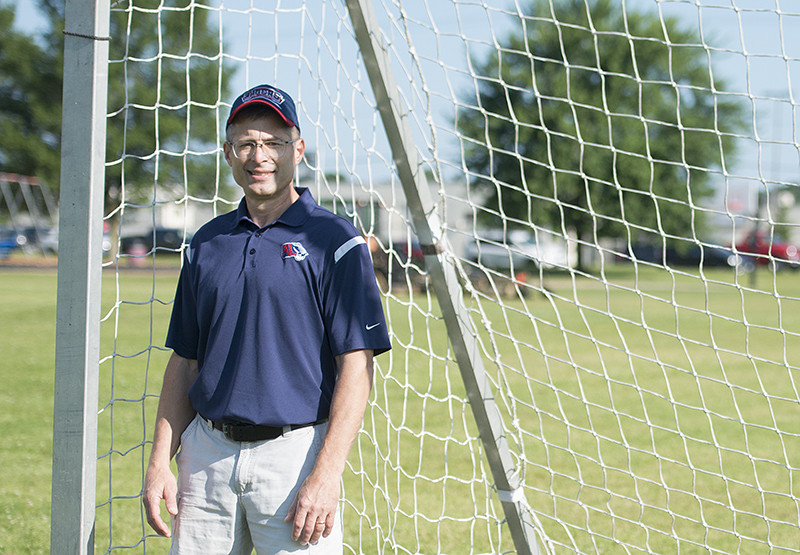 Dave Schultz will be the new head coach of the Albert Lea girls’ soccer team in 2019 after spending the last four years on the sidelines as an assistant coach. - Tyler Julson/Albert Lea Tribune

After spending four years on the sidelines as an assistant coach and seven years as a coach in the Minnesota Youth Soccer Association, Dave Shultz will step into the head varsity coach role for the Albert Lea girls’ soccer team.

“I knew right away that I would like to have the opportunity to put my best foot forward and apply for it,” Shultz said. “I love to coach. I love to develop players and being the coach of the varsity squad seemed like a good way to continue doing that.”

Although Shultz can’t officially meet with his players until Monday, he didn’t find out until mid-July that he had been offered the position. After an interview process with Albert Lea Activities Director Paul Durbahn and a panel of other interviewers, Schultz was informed the next day he had been hired.

“I’m confident Dave will be the right fit,” Durbahn said. “We hired Dave because he brings excitement and energy to the program. He’s aligned and committed to our core values and the direction of our activities department.

“He also has experience coaching within our program and worked closely with our previous coaching staff. It seemed to make sense as we were confident he’d be able to work well with our current athletes, staff and families. Dave will be a positive reflection of our community.”

Being with the team for four years already, Shultz said the transition into the head coach role should be fairly seamless.

“I’ve had the opportunity to learn and grow under two previous head coaches and I learned a tremendous amount from both of them,” Shultz said. “Now I get to take all that and apply some of the things I picked up as head coach in the MYSA level, so I feel like I’m prepared. Not only prepared, but the biggest piece is the love for the game and the love for the kids, and building and developing the kids is what it’s all about.”

Schultz said his coaching style is all about building a winning culture and developing strong relationships with his players. He said setting high expectations, a relentless work attitude and embracing the grind will lead to a successful season.

“In my view, it’s about winning, but it’s about winning at life lessons,” Schultz said. “It’s not that we have to win at all costs. It’s we win when we present ourselves with above-the-line characteristics and display those in a match or at practice and carry those into real life situations.”

His coaching philosophy has worked well in the past and earned him recognition among other coaches, as he was selected as the Section 2A Assistant Coach of the Year in 2017.

Although he already knows the team well, Shultz still expects there to be some minor growing pains as he steps into the new position. According to Shultz, the best way to develop a winning culture is to build and maintain relationships with all the players.

While he loves that aspect of coaching, with around 45 players signed up for the squad this season, Schultz said the time management for that will be his biggest challenge.

Schultz mentioned the community support for the program has already been immense. The faculty and staff at the school, the backing of the booster club and the use of facilities at Southwest Middle School while Hammer Complex is being worked on have all been fantastic, according to Schultz.

“It all comes back again to that culture,” he said. “We’re going to relate to each other and respect each other. We’re going to work hard and we’re going to celebrate the victories and not get down when we might come up short on the scoreboard.

“There’s sometimes a lot of victories that can be had even when we come up short in a competitive match. So were going to work on the positives and turn our negatives into positives and build and grow off that.”

The Tigers are coming off a 7-7-2 season and a first-round exit from the Section 2 tournament. They will start their regular season on the road Aug. 24 against Mankato West. Their first home game is slated for Sept. 5 against Faribault.