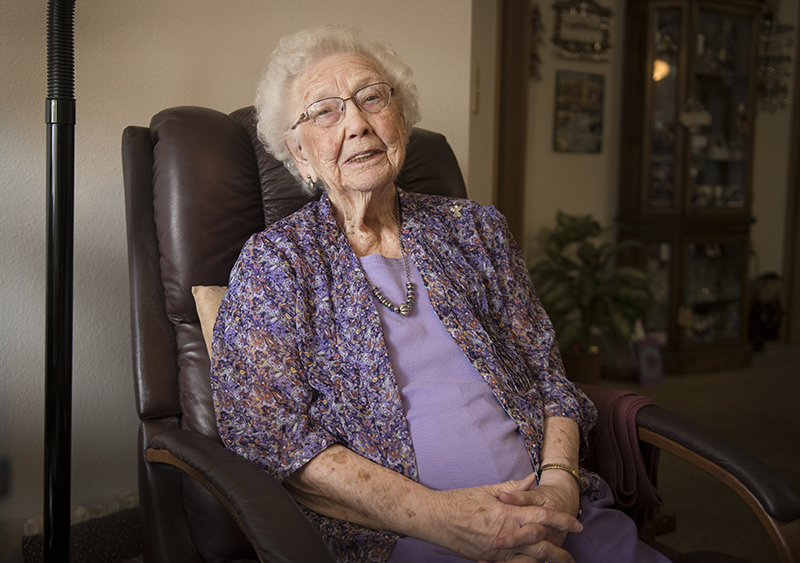 Albert Lea centenarian calls herself ‘lucky’ to have reached 100

Ask Albert Lea resident Dorothy Gulbrandson how she lived to be 100, and she wouldn’t be able to pinpoint one certain cause.

“I was a lucky person,” Gulbrandson said. “I feel God was good to me all the time.”

A people-person who tries to maintain a good sense of humor, she said she often marvels at how the world has changed since she was a child.

“I just wonder what my parents would say to all this — going to the moon,” she said. “It’s been wonderful.”

Born July 25, 1919, on her grandparents’ farm in Hartland, Gulbrandson is the daughter of Gifford and Ruth Swanson.

She had one sister, Betty Jean, who was six years younger than her and who died 15 years ago, she said.

Gulbrandson recalls her days as a youth spent helping her father milk cows.

She attended school in Hartland through eighth grade and then completed high school in Albert Lea, staying with her uncle and aunt, Norvin and Mabel Peterson, during the week and then going home on the weekends.

She married Wallace Demmer, the oldest of 12 children, in 1937 at the age of 18. Gulbrandson said Demmer and his family lived in Hartland, too.

Together, the couple had one daughter, Becky, in 1943.

Living without electricity for all of her youth, she said she finally got electricity on Christmas Eve in 1939.

Over most of her adult years, Gulbrandson was heavily involved with 4-H and Minnesota Extension and Crossing Glory Church in Hartland, where she has been a lifelong member.

She recalled chaperoning trips with Demmer for 4-H to Washington, D.C., and being involved with 4-H Week in the Twin Cities.

Demmer died in 1981, after the couple had been married for 43 years, and five years later, she married Ellsworth Gulbrandson. The couple liked taking bus trips together and toured all over the United States and Canada. They were married almost 25 years before he died in 2010.

She said she moved to Bancroft Creek Estates in 2005 to be closer to him, as he battled Alzheimer’s disease and was in the nursing home of Good Samaritan Society of Albert Lea.

“It’s been an interesting life,” she said.

Looking back over her 100 years of life while being interviewed Wednesday, Gulbrandson said she has had a mostly clean bill of health — other than appendicitis in her early married years and a few other smaller issues — until this spring when she fell, broke a few ribs and punctured her lung.

Though things haven’t quite been the same since her fall, she said she feels like she has been blessed throughout her life — particularly with all of the people who have been in her life.

“I feel everybody’s been so good to me,” she said.

For many years, she ate a handful of grapes and walnuts for breakfast and has diligently read at least one chapter a day out of the Bible.

She said for several years she has worn an angel pin on her shoulder, noting that it gives her a sense of security. She said she won’t leave her apartment without it on.

She turned 100 years old on July 25 and celebrated with over 175 family and friends at Bancroft Creek Estates. She also celebrated with several family members July 17 by going to a Twins game for her first visit to Target Field.