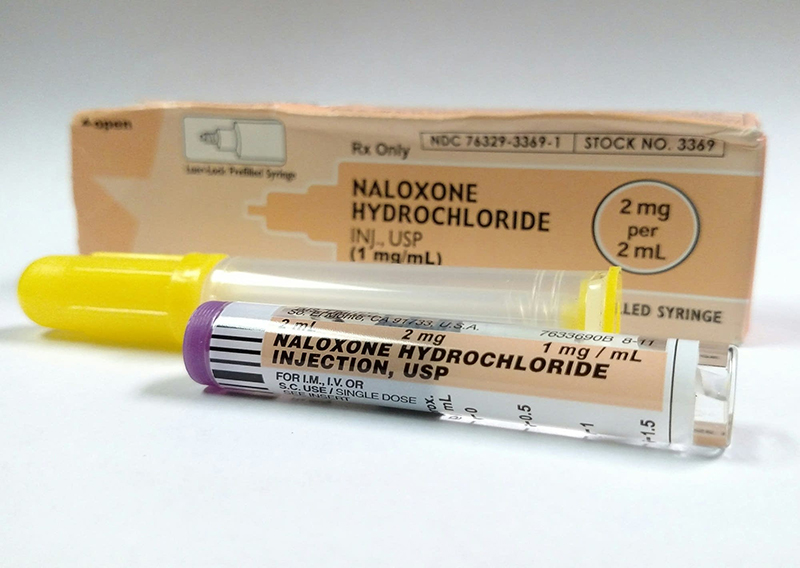 The opioid crisis has affected people across the country. Naloxone, or Narcan, can help revive people who are suffering overdoses. - MPR News file

Doctors are prescribing naloxone more frequently in Minnesota and across nation

The opioid epidemic has claimed thousands of lives across Minnesota over the last two decades, but there are some signs the situation may be improving. The number of prescriptions for a drug that can reverse opioid overdoses rose dramatically last year.

Some see the increased availability of the drug naloxone as a sign that prescribers are changing their practices, and that stigma around the anti-overdose medicine may be lessening.

About 50,000 people die each year in the United States of opioid overdoses. Opioids can cause death by shutting down a user’s respiratory system. Naloxone, also known by the brand name Narcan, can reverse an opioid overdose if it’s administered in time.

That increase is encouraging, said professor Laura Palombi, who teaches at the College of Pharmacy at the University of Minnesota Duluth. Palombi said doctors are beginning to see naloxone as not only acceptable to prescribe, but necessary.

“When it comes to working with health professionals, one of the biggest pieces is overcoming that stigma when it comes to the myth that you’re enabling use by giving somebody a life-saving drug,” Palombi said. “Stigma is our greatest barrier right now, when it comes to caring for people with substance disorders but also when it comes to naloxone.”

The number of naloxone prescriptions dispensed nationwide doubled between 2017 and 2018, according to the CDC data. But they’re still not anywhere near as common as opioid prescriptions.

High-dose painkillers are commonly prescribed for serious surgeries or cancer pain. The CDC recommends that prescribers pair high-dose opioid painkillers with naloxone due to the risk of overdose. But that recommendation hasn’t been widely adopted. The number of naloxone prescriptions dispensed last year is still dwarfed by the 9 million high-dose opioid prescriptions dispensed last year, according to the CDC.

Doctors have been prescribing these medications through their entire careers, so they may not see them as especially dangerous, Palombi said. Even lower doses can be risky because opioids can interact with other medications and cause overdose.

”If you look at people who unfortunately died of an opioid overdose, it’s very rare that they would have just an opioid in their system. Usually there are other substances,” Palombi said. “Some of these folks, we wouldn’t even recognize them as high risk until we take a closer look at what they’re taking.”

The patterns of naloxone prescribing in Minnesota largely mirrors those in the rest of the country. Naloxone is more commonly prescribed in areas where there are lots of overdoses. It’s also prescribed more often in exurban or rural counties.

Chisago, Carlton, Mahnomen, Pine and Waseca counties have the highest rates of naloxone prescriptions in Minnesota.

The newly released data captures only a fraction of the naloxone supply in the state. The CDC has previously stated that only about 20 percent of the total naloxone supply is collected in this sort of data. Substantial supplies of naloxone are distributed by harm-reduction groups and nonprofits, and supplied directly to first responders who frequently encounter people who overdose on opioids.

Anecdotally, it makes sense that most of the naloxone in Minnesota isn’t dispensed by pharmacies, said Minnesota Board of Pharmacy Executive Director Cod Wiberg.

The state Department of Health also has a program that allows pharmacies to distribute naloxone to patients without a direct prescription. Cody Bassett, naloxone coordinator for the state, said the protocol for pharmacies started in 2017, and now includes about 420 pharmacies across the state.

“That’s just a really good sign of willingness to go into the protocol and the sort of passions that a lot of pharmacies have to serve their patients and save lives,” Bassett said.

Bassett said the state protocol gives pharmacists flexibility that allows them to get naloxone to those in need, including friends and loved ones of opioid users.

”Let’s say that my friend thought I was at risk of overdosing from opioids, they could go to the pharmacy and express that concern, and then they could get naloxone,” Bassett said.

Health care organizations are also playing a role in making naloxone more widely available in the state. Alyssa Nielsen, who manages pharmacy practices at HealthPartners, said they started to change how they prescribed naloxone about a year and a half ago.

Nielsen said HealthPartners has worked to not only educate prescribers about the real risks of overdose, but also to address stigma among patients. They identified about 1,100 patients receiving opioids as being at high risk for overdose. About 200 of those patients declined offers of naloxone.

”People have made a reference to it being similar to having a seat belt in your car,” Nielsen said. “You get into your car never thinking you’re going to get into an accident, but you’re really happy that you wore your seat belt if you ever were to need it.”

Public health experts said there’s still work to do on expanding access to naloxone. But preliminary numbers show that last year, opioid overdose deaths in Minnesota held steady for the first time since the crisis began.