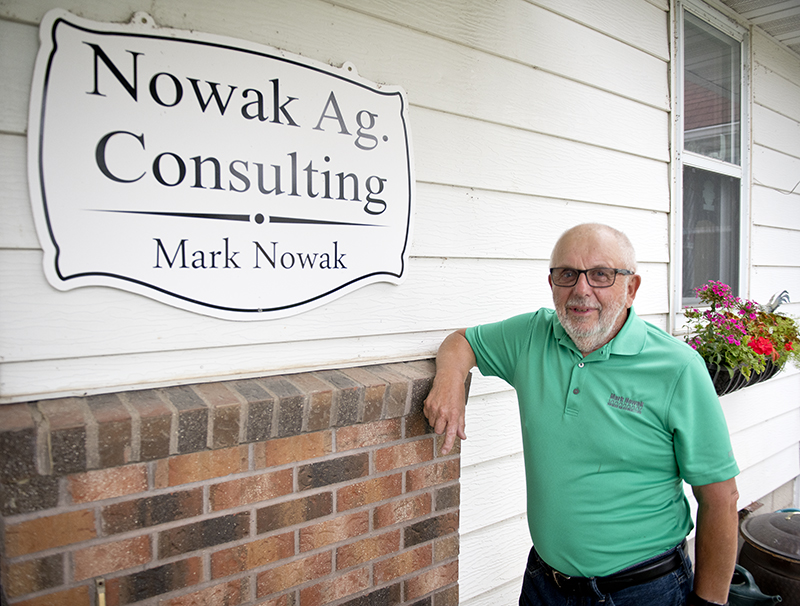 WELLS — For Mark Nowak, a love of farming transferred into a love of helping farmers.

While farming all along, Nowak amassed 45 years of agriculture lending experience — or experience “in the trenches of ag lending with farmers,” as he put it.

He spent 16 years with the United States Department of Agriculture Farmers Administration working in its ag lending division. He then moved into community banking — still with a focus on ag lending, starting with Americana in 1984 before moving to Farmers State Bank in 2001, helping to open the bank’s Albert Lea branch.

In early 2013 Nowak retired from the banking business. He realized how much he liked the part of his job that consisted of working with farmers, and decided to start his own ag consulting business — Nowak Ag Consulting — in April 2013. The business can be reached at mark@nowakagconsulting.com or by calling 507-391-4472.

Nowak knew there was especially a need to help farmers keep better track of their records. Farmers have to send in their entire financial report each year to their lenders, Nowak said, which includes balance sheets, income and expense statements and a cash flow plan that includes a plan of operation. That data is then packaged together and taken to lenders to determine credit worthiness for loans.

Where Nowak comes in, is helping to not only put together that lender-ready package, but to also keep track of the records that make up the package.

For a lot of his customers, Nowak gets copies of their bank statements — complete with copies of their checks, to keep records and track his customers’ finances through accounting. He also compiles their income and expenses, profits and losses, loan balances, lists of checks and lists of vendors each year for income data and for the farmers to take to their tax accountants.

In addition to helping farmers keep track of their records and finances, Nowak also does what he can to advise them about anything having to do with farming. He checks and tracks weather and crop reports, watches markets, gives customers his opinion on when’s a good time to sell, and in general lets his customers pick his brain, among other services, he said.

“I have a passion for this farming business, for this ag business,” he said.

With all his banking and ag lending experience, Nowak said he has developed a talent for finding long-term fixed interest rates for his customers requesting loans — something community banks can’t always do, he said.

As there are always different farming bills being introduced, Nowak said, he also tracks new policies and researches which pieces his customers would be best-suited to sign up for.

A lot of the trust Nowak’s customers bestow to him is based on him being a farmer as well, he said, and that he can recommend policies and advise others knowing what he would want as a farmer as well.

“I have a good relationship with farmers because I am one of them,” he said.

Nowak does local crop investigating, some of which is on his own crops, sometimes counting the kernels and pods. He also attends different ag conferences and summits, summarizing what he learns and typing it up — which is proofread by his wife, Lea, a retired English teacher — to share his newfound knowledge with his customers.

He cultivates strong relationships with leaders in the industry, such as DTN — which Nowak considers to be the premier ag information network. Nowak said he not only gets information from DTN, but feeds the organization information as well, and said he was even the first farm in the U.S. to place a DTN weather station on his property. There are now over 6,000 across the country, according to Nowak — who said his wife told him that if he wasn’t a farmer he would’ve been a meteorologist.

A University of Minnesota graduate, Nowak also works with the university’s Center for Farm Financial Management.

Nowak said he also has a strong working relationship with area banks and ag lenders, and has helped facilitate or mediate business between them and his customers. He feels he receives a decent amount of respect from both the banking and farming sides, thanks to his sizable experience in both industries and his ability to stay balanced.

When looking for an example of what he can do to assist farmers, Nowak cited one farmer who was having trouble getting a loan due to the amount of debt he had accrued. When the farmer was referred to Nowak, Nowak told him he did have too much debt to get approved for a loan, but that Nowak could help him change that. Nowak said he suggested the farmer sell a small portion of his land — less than 10% of his operation — to help pay off the farmer’s debt. The farmer sold the land to an investor, who then rented it back to the farmer. In short, the farmer didn’t lose any land and paid off over half of his debt, making him eligible for a loan.

Another story from Nowak’s over-50-year career was helping a family close to him who lost two of its family members — both farmers — finish out its farming operation. Nowak facilitated an auction to sell the equipment, and is arranging for people to harvest what’s left of the crops. Nowak said years ago he didn’t think that would ever be part of his job description.

“It was heartwarming to see the family … to know I had a piece in making it as good as it could be,” he said.