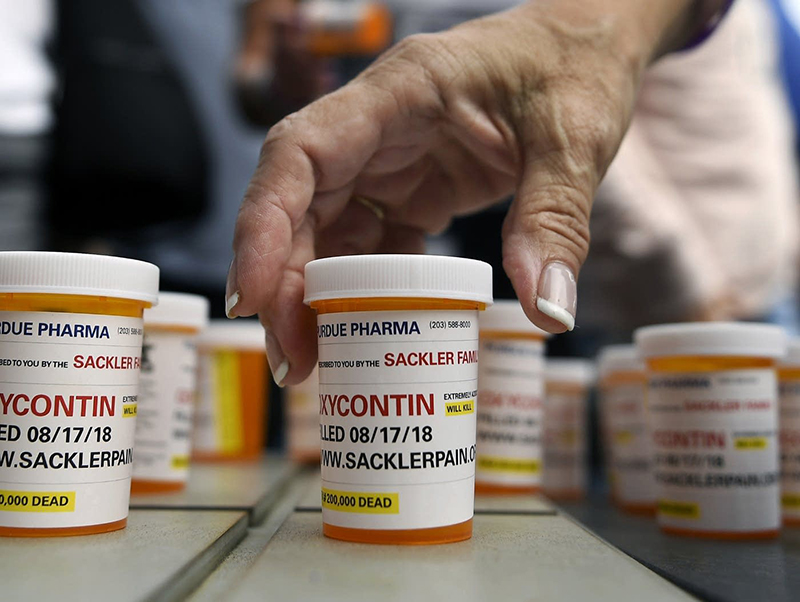 Family and friends who have lost loved ones to OxyContin and opioid overdoses leave pill bottles in protest outside the headquarters of Purdue Pharma in Stamford, Connecticut, in August 2018. Data made available by the Washington Post show a link between prescribing practices and rising opioid overdose deaths in Minnesota and across the country. - Jessica Hill/AP via MPR News

At the height of the opioid epidemic, enough prescription painkillers were distributed to Minnesota pharmacies for every state resident to have 156 pills, according to new government data made available by the Washington Post.

The 842 million pills distributed between 2006 and 2012 came as hundreds of Minnesotans died of opioid overdoses.

Baker and other advocates for victims of overdose have long argued that the pharmaceutical industry, prescribers and pharmacists helped fuel the opioid overdose epidemic.

As the state and country head toward a reckoning on the opioid overdose epidemic, the numbers shed light on the role played by those responsible for caring for people’s health: pharmaceutical companies, prescribers and pharmacists.

In total, the Washington Post analysis found that 76 billion oxycodone and hydrocodone pills were distributed across the country between 2006 and 2012. More than 100,000 people died of opioid overdoses during those years.

The released data only covers 2006 through 2012. The Centers for Disease Control and Prevention says opioid prescribing rates have been declining nationally since 2012.

Most pills made their way to the Twin Cities metro area, where much of the state’s population lives. There were 195 million pills distributed in Hennepin County. Another 86 million pills went to Ramsey County.

Rural counties — Mille Lacs, Pennington, Wadena, Big Stone and Aitkin — topped the list for the number of pills dispensed per resident, according to the data.

As the overall supply of pain pills increased in Minnesota, so did the number of people dying of opioid overdoses. State overdose deaths increased by more than 35 percent from 2006 to 2012. Overdose deaths have risen in the state every year since 2000, except for last year when preliminary data show a decrease.

Street heroin and illicit fentanyl are often seen as the most lethal threats to opioid users. But more opioid overdose deaths in the state in the last two decades have been attributed to prescription painkillers than either heroin or other synthetic opioids.

Opioids have always been used for medical treatment, but a few things came together in the 1970s and ‘80s that changed how opioids were being used by doctors.

Some articles in medical journals argued that severe pain wasn’t being treated adequately and that addiction to opioids had been overstated, said Dr. Mark Jones, a physician at Beth Israel Deaconess Medical Center in Boston and a clinical fellow at Harvard Medical School.

In 1995, the American Pain Society launched a campaign called “pain as the fifth vital sign.” That sentiment was echoed a few years later by the Veterans Health Administration. A whole generation of doctors were encouraged to use opioids to treat pain without necessarily distinguishing between the types of pain, Jones said.

“At the same time, you have big pharma touting their new nonaddictive form of opioids,” Jones said. “And boom, the floodgates were open into this whole scenario.”

Jones said opioids aren’t evil and can be an effective medicine for some sorts of pain.

“They’re actually the most powerful tool that we have in the treatment of pain,” Jones said. “They’re good for acute, surgical or traumatic pain. They’re terrible drugs for the treatment of chronic pain.”

Minnesota responds to the epidemic

Baker, the state lawmaker who lost his son to overdose, saw the impact of changing prescribing practices firsthand. His teenaged son Dan was first prescribed opioid painkillers for a minor back injury after going away to college. Dan’s opioid use blossomed into addiction. When he couldn’t get pills anymore from doctors, he used heroin and eventually overdosed.

Baker said there’s more than enough blame to go around — from the pharmaceutical industry to doctors to federal regulators that approved opioids and didn’t reconsider their uses as the body count mounted.

Baker and other advocates spearheaded opioid legislation that passed earlier this year. It boosts fees on pharmaceutical companies and distributors that deal in opioid painkillers. The estimated $20 million raised each year will be used to expand access to treatment, reduce overdose deaths and address other costs caused by the opioid epidemic, such as additional needs for the state’s child protection system.

“We’re not supposed to penalize private companies like the distributors for selling a lot of product,” Baker said. “But when they are doing it on the backs of others and addiction is wiping out statewide budgets and county budgets for placement for families and children, they aren’t doing anything about it, then we have to actually step in and do something.”

In addition to the legislation, the state attorney general’s office is involved in at least four major lawsuits against opioid manufacturers or distributors.

In 2010, Minnesota launched a prescription monitoring program for prescribers in an attempt to rein in pill mills and users who were “doctor shopping” for painkillers. Noting that many prescribers didn’t voluntarily use the program, the state mandated enrollment for prescribers starting in 2017.

Doctors and pharmacists had been accustomed to treating patients’ pain like it’s a “vital sign.” It’s taken a while for prescribers to catch up to the science and change their practices, said Cody Wiberg, executive director of the Minnesota Board of Pharmacy.

”It may have taken maybe a couple of years longer than it should have for everyone to realize what was going on and start putting things in place earlier to stop it,” Wiberg said. “Once it became clear to everyone — from public policymakers to health care professionals — that we’re dealing with a problem, I do think we ramped up to try to do something to deal with the epidemic.”

The state recently sent report cards to all prescribers in the state who have at least one Medicaid or MinnesotaCare patient. The report cards show how their opioid prescribing practices compare to their colleagues.

If opioids are being prescribed beyond the recommended threshold, the providers could be restricted from serving Medicaid and MinnesotaCare patients.

Wiberg said health care systems and pharmacy chains have also tried to exert more control over opioid prescribing. From 2016 until 2017, there was a 10 percent reduction in the number of opioid prescriptions dispensed, according to the state prescription monitoring program.

Prescribers are often busy treating patients, said Dr. Chris Johnson, chair of the Opioid Prescribing Work Group, which formed in 2015 to revamp how opioids are prescribed in the state. Efforts like the report cards help, he said.

Still, Johnson believes the medical industry hasn’t been held accountable for the role it played in fueling the opioid epidemic.

“When I say the U.S. health care system is unethical, I do not mean it is filled with unethical doctors,” Johnson said in an email. “Rather, I mean it is unethical in that it results in harmful behavior to patients because the business incentives are to bypass good science in order to bring lucrative products and procedures to market.”

Jones, the fellow at Harvard Medical School, said all of those safeguards states are imposing are starting to make a dent in how prescribers treat opioids. But he hopes those efforts don’t stigmatize opioids in ways that hurt patients.

“Not treating someone’s pain will lead to worse outcomes,” Jones said. “For agencies to step in and to restrict care in such a way, [that] could lead to more problems.”

Jones said the tough lesson the health care system learned through the opioid epidemic is that treating pain can have ripple effects.

“Doctors were so focused on treating the individual patient at a certain time that you can lose perspective,” Jones said. “What we do for each patient can have a more public health, epidemiological effect.”