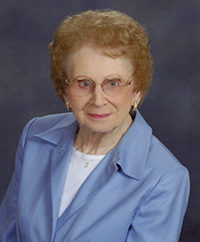 Eldora was born Nov. 24, 1921, in Freeborn County, the youngest daughter of Ervin and Emma (Fevold) Lau. She was baptized at Bethlehem Lutheran Church in Myrtle and reaffirmed her faith with confirmation at First Lutheran Church in Northwood.

Eldora taught in Worth and Freeborn counties throughout her teaching career. In addition to regular classrooms, Eldora had the wonderful experience of teaching kindergarten through eighth grade in a rural one-room schoolhouse. She found great joy in sharing the stories of those days.

Eldora was united in marriage to Sophus B. Holstad on June 8, 1947, at First Lutheran Church in Northwood. Together they farmed near Kensett and were blessed with four children — sons Alyn and Lynn and twin daughters Sharyn and Sharyl. She was a loyal member of Elk Creek Lutheran Church and served on many committees. Eldora, with her husband, Sophus, and family moved to Clear Lake in 1957. They became active members of Zion Lutheran Church, where Eldora taught Sunday school and was a member of Praise Circle for many years.

In addition to being a dedicated wife, mother and teacher, Eldora worked in retail sales for many years at Moeller’s Clothiers and Patterson’s Jewelry. After retirement, Eldora and Sophus enjoyed visiting friends and family throughout the United States and traveling abroad to Norway, Sweden, Denmark and England.

Eldora and Sophus celebrated 54 years of marriage, and she remained his devoted wife and caregiver until his death in 2001.

Eldora appreciated her Norwegian genealogy and traditions and was an active charter member of the Sons of Norway, Midnotsol Lodge 1-535. She thoroughly enjoyed her years as a member of Clear Lake Progress Club, maintaining current memberships in Ladies Auxiliary Veterans of Foreign Wars and Clear Lake Women’s Club. She was an avid baker, known for sharing her excellent Norwegian pastries, pies and lefse.

Eldora loved to dance and held an appreciation for all types of music, her favorite being the big band era.

Eldora enjoyed many special friends and shared the joy of playing cards, dominos and dice games. In her spare time, she continued lifelong hobbies of embroidery, flower gardening and reading.

Eldora loved her family deeply and treasured the time she spent with her children, grandchildren and great-grandchildren. She will be sadly missed and fondly remembered by all who knew her.