Gary G. Anderson Jr. of Albert Lea passed away unexpectedly from natural causes Monday, Aug. 5, 2019. He was 58 years old. A celebration of life is pending. Inurnment will take place at Green Cemetery in Glenville. 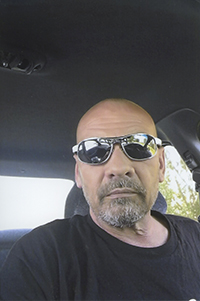 Gary was born Nov. 3, 1960, to Gary Anderson Sr. and Joyce Cunningham Anderson in Des Moines. He grew up in Madrid, Iowa, and Emmons. After high school Gary earned his diesel mechanic degree at Riverland Community College in Albert Lea. He worked at Wilson & Co. as a meat packer for many years until the plant’s closing.

Gary’s interest in mechanics stayed with him his whole life. He loved tinkering with small engines and turning wrenches. Gary enjoyed watching television — especially tuning into the Vikings or “Street Outlaws.” Some of Gary’s other interests included tending to his yard, rummaging through garage sales and socializing at the Nasty Habit. His family will remember him for his stubborn personality and his heart of gold. Gary was a loyal and devoted family man who loved his grandsons.

He leaves behind his caring friends Matt Dulitz, Jesse Anderson and Jerry Lee Anderson, who he loved spending time with. Gary is survived by his spouse, Brenda Hatleli; two sons, Greg (Tiffany) Anderson and their children Ashton and Bentley, and they have another on the way, and Kieth Anderson; his daughter, Roselyn (Dylan) Yunker, and their newborn, James; and his sister, Kim (Tim) Thomas, and their children Valerie, Keri, Jami Lynn and Devon.

Gary was preceded in death by his parents Gary Sr. and Joyce; his grandparents; and many aunts, uncles and extended relatives.

Funeral services for Catherine A. Zimney of Albert Lea will be at 10 a.m. Saturday at St. Theodore’s Catholic Church... read more