Funeral services for Gilmore “Gil” L. Nelson of Ellendale will be at 11 a.m. Thursday at First Lutheran Church in Ellendale. The Rev. Richard Sliper will officiate. Visitation will be from 5 to 8 p.m. Wednesday at Bonnerup Funeral Service in Ellendale and one hour prior to the service at the church. Interment will be in First Lutheran Cemetery. Military honors will be accorded. 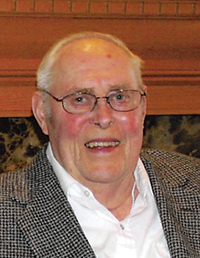 He was a graduate of Ellendale High School in 1944. Gil proudly served his country in the U.S. Army.

On Oct. 24, 1953, he was united in marriage to Clarine “Kay” Hovland in Lime Creek Lutheran Church. Gil had been employed as a milkman for Nelson Dairy, Thompson Dairy, Polly Meadows and Marigold Dairy. He was custodian for Ellendale Public Schools for 20 years, bus driver for 32 years and funeral assistant and grounds keeper for Bonnerup Funeral Service for over 30 years.

Gil was a member of the Ellendale American Legion and a volunteer firefighter for Ellendale for 35 years. He was an honorary life member of the Minnesota State Fire Department Association. Gil was an active member of First Lutheran Church and served on the church council.

He was preceded in death by his parents; wife, Kay, in 2016; son-in-law, Greg White; mother and father-in-law Knut and Clara Hovland; brothers Lloyd and his wife, Bernice Nelson, Clayton and his wife, Audrienne Nelson; and in-laws Ervin Hovland, Earl Towne, Mavis and Donald Bartsch.

The family would like to extend a special thank you to the staff at St. John’s Woodlands and Mayo Hospice Albert Lea for their care and compassion given to Gil, and to the Rev. Richard Sliper for his visits and prayers with Gil and his family.