Funeral service for Gladys J. Bergland will be at 2 p.m. Aug. 31 at First Lutheran Church in Albert Lea. The Rev. John Holt will officiate. Interment will be at Hillcrest Cemetery. Visitation will be from 5 to 7 p.m. Friday at Bayview/Freeborn Funeral Home and one hour prior to service at the church Saturday. Online condolences are welcome at bayviewfuneral.com. 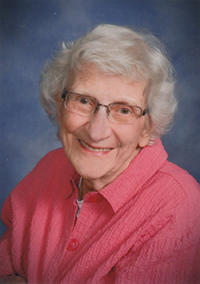 Gladys Jeanette (Lyngaas) Bergland was born April 7, 1922, on her family’s farm near Twin Lakes. She was baptized and confirmed at Lunder Lutheran Church and attended country school with her sisters and brother, earning a certificate of perfect attendance.

On June 18, 1946, she was united in marriage to Truman Bergland in Emmons. The couple lived in Freeborn County for their whole lives.

Gladys was a homemaker, strong in her faith, and a loving and dedicated wife, mother, grandmother and great-grandmother. Everyone loved her cookies and her chocolate cake with brown sugar frosting. Her children loved coming home from school to homemade bread, buns and cinnamon rolls. All birthdays were celebrated with homemade angel food cake and seven-minute pink or blue frosting.

She loved all children. She took care of her own seven children and welcomed visits from family and friends, which often turned into extended stays. The only time she had the house to herself was when Truman would hitch up Dick and Flicka to the buggy and the kids would all jump in and head to Albert Lea to meet up with Uncle Arden. Gladys was always involved in her grandchildren’s and great-grandchildren’s lives, always remembering everyone’s birthdays and sending cards. She loved to travel and enjoyed geography and maps. She visited Alaska, Florida, Missouri, Wisconsin, Arkansas, North Dakota, South Dakota and Tennessee.

In 1966, Gladys won a million Gold Bond stamps from Boyd and Jacks Super Value grocery store. She enjoyed reading her daily devotions, searching for four-leaf clovers, crocheting — especially baby blankets for her grandchildren and great-grandchildren, and looking at pictures on Facebook.

Gladys passed away peacefully surrounded by family Wednesday, Aug. 14, 2019, at the memory care unit at Thorne Crest Senior Living Community. She was 97.

The family extends thanks and appreciation to all her caregivers and a special thank you to St. Croix Hospice. She will be greatly missed by all who knew and loved her.