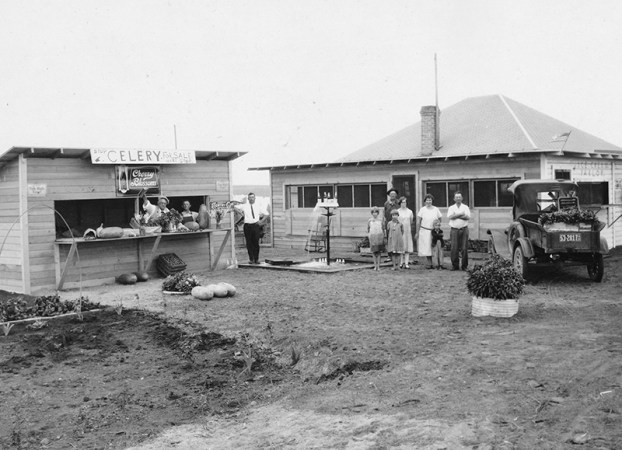 This vegetable stand was located next to Chuck's Place, a short-order eating establishment and ice cream parlor. It was operated by Charles Ulrich. The artesian well kept the soda water and beverages cold. -Photo courtesy Freeborn County Historical Museum 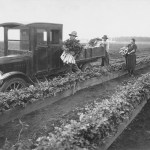 In 1926, this celery crop was hauled to the railroad for shipment. Promotional materials for the Hollandale area described Hollandale Celery as “crisp, tender and succulent, and has the real celery flavor.” — Photo courtesy Freeborn County Historical Museum 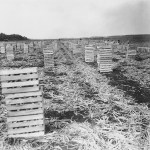 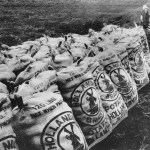 These sacks of Hollandale Brand potatoes are ready for shipping. The brand was the registered trade mark of the Hollandale Marketing Association. Note the Dutch windmill on the sacks. – Photo courtesy Freeborn County Historical Museum 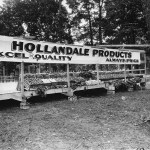 This array of Hollandale potatoes, carrots, beets, celery and cabbage were on display during a celebration in 1926. – Photo courtesy Freeborn County Historical Museum 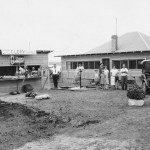 This vegetable stand was located next to Chuck’s Place, a short-order eating establishment and ice cream parlor. It was operated by Charles Ulrich. The artesian well kept the soda water and beverages cold. -Photo courtesy Freeborn County Historical Museum

The 1920s found the Hollandale area experiencing rapid growth. In 1922, the village was platted. By the end of the following year, a church, school and business district were constructed. Crops had been planted, and a rich harvest was on the horizon.

Albert Lea’s Empire Grocery store promoted Hollandale celery as the finest on the market. The store sold bunches for 5, 10 and 15 cents. The 1923 advertisement continued with a description of Hollandale potatoes as “clean, smooth and free from scab; the nicest potatoes we ever saw.”

By 1926, branches of the Milwaukee and Rock Island Railroad lines were completed to Hollandale. Within a month of their arrival, 35 carloads of vegetables were being shipped every day.

Devastating rains and difficult weather conditions led to poor yields and some ruined crops during 1927 and 1928. The farmers’ determination and hard work, plus cooperative weather conditions, resulted in rewarding yields in 1929. Potatoes were averaging 250 bushels to the acre and attaining a price on the ground of $1.25 to $1.50 a bushel. Onions were running 300 to 400 pounds an acre. Shipment of the produce started in August 1929, and by the end of September, more than 1,200 railroad carloads had left Hollandale. The majority of the crops were shipped to markets by the first of November.

By Angela Moller Angela Moller is a local graphic designer and artist. She loves everything about fall, including the changing... read more