Surrounded by her family, Judith Darlene Wangsness of Wadena journeyed home Thursday, Aug. 15, 2019, after a courageous battle with cancer. 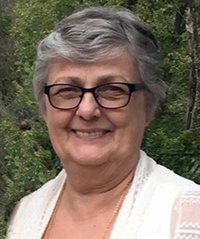 She graduated from Albert Lea Senior High School with the class of 1966. She was united in marriage with Bruce Wangsness on May 14, 1974. They started their family in Wadena, where they had resided for 40 years. Bruce and Judi enjoyed camping and fishing and spent many weekends at Buchanan Lake with their children.

Judi also enjoyed gardening, canning, bowling, ordering gifts online and spending time with her family. She reintroduced the Young American Bowling Alliance at Wadena Lanes, and managed the group for 20 years. After 38 years in banking, Judi retired as the head data processing analyst at First National Bank of Wadena in 2004. In later years, Bruce and Judi spent time snowboarding in Bullhead City, Arizona.

Those she leaves behind to cherish her memory are her husband of 45 years, Bruce Wangsness, of Wadena; son, Casey (Tresa) Wangsness, and grandson, Bruce, of St. Cloud; son, Trevor (fiancee, Kristin Peterson) Wangsness and grandson, Jarin, of Brainerd; stepdaughter, Suzanne (J.R.) Plautz, and grandson, Brady, of Pillager; two sisters; many other relatives; and a host of friends.

Private services for Judi will take place at a later date.

Visit www.karvonenfuneralhome.com to send Judi’s family a message of comfort and support.