‘Just knowing it came from home’ 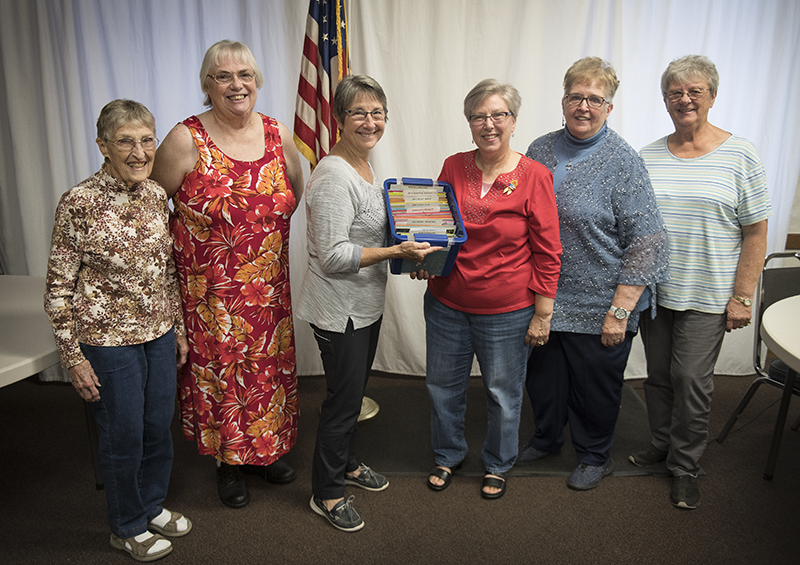 A group has started collecting donated greeting cards is sending them to those deployed to send to their family and friends, as they said it is often difficult to buy greeting cards when they’re deployed. - Colleen Harrison/Albert Lea Tribune

A simple idea that started with the Albert Lea American Legion Auxiliary is benefiting hundreds of deployed Minnesota military members and their families.

Auxiliary member Karen Cibert said the idea started after the auxiliary’s November meeting, when they decided to start a group to remember deployed troops from the area.

That group started meeting monthly in December for breakfast to catch up on where the deployed people were from the area, what they were doing and what the group could do to help them.

She said they started thinking about one of their auxiliary members, Tasha Kilen, who was deployed and decided they wanted to do something for her with her birthday approaching in March.

Cibert said she loves cards, and she came up with the idea of gathering cards not only that families back home could use to give to their loved ones who are deployed, but that the soldiers who are deployed could use to send back home for special occasions such as birthdays and anniversaries. She said it is often difficult when deployed to find a store to get cards.

The women started gathering extra cards they had at home, and came up with a nice collection, but noticed they didn’t have any Mother’s Day or Father’s Day cards.

Cibert said she went to a business in town that sells cards and asked the man in charge if the business might be able to help. He said he did but that they were in boxes since it wasn’t the season for the cards. He said he would keep the group in mind when they started putting the cards out for the season.

When the season came, the business donated two trays of Mother’s Day cards — or about 73 cards — and the auxiliary members took one out, signed it and put it in a care package to Kilen for Mother’s Day. Along with other items such as donated books, movies, magazines and snacks, they included the rest of the unused Mother’s Day cards with a note to let her fellow troops know that the cards were for them to take and send to their loved ones.

“They were just ecstatic,” Cibert said, noting Kilen told her everyone wanted to come visit her for treats and cards.

After that, Cibert said she inquired about Father’s Day cards, and to her delight when she went to pick up these cards, the business donated three large boxes of cards, including everything from cards for Father’s Day, to cards for birthdays, sympathy, congratulations and anniversaries, among others. 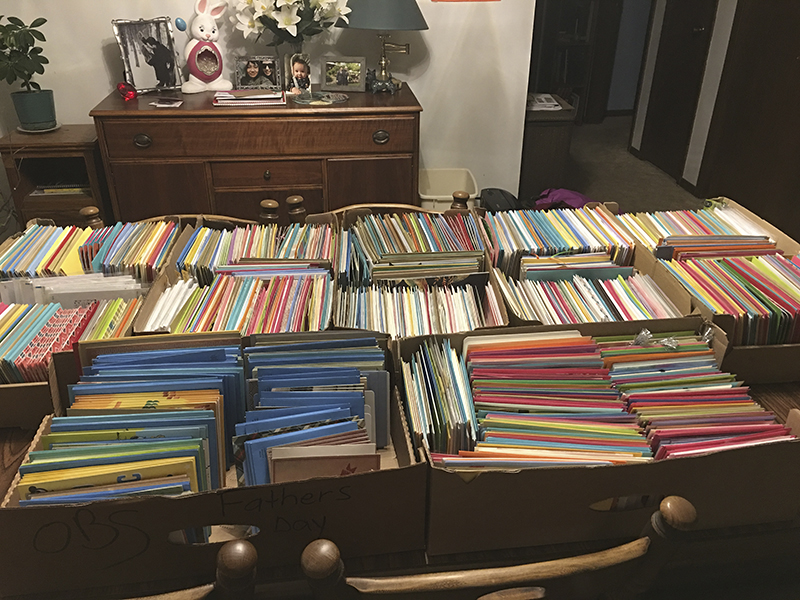 A local business has donated large boxes of cards, including everything from cards for Father’s Day, to cards for birthdays, sympathy, congratulations and anniversaries, among others to the group to give to those deployed. – Provided

She estimated there were about 200 Father’s Day cards and about 1,600 other unsorted cards.

The Father’s Day cards were sent to Kilen and another female soldier serving near her and Minnesota National Guard families.

The variety cards have been distributed at the Veterans Affairs home in Hastings and to Minnesota National Guard units preparing for deployment.

“It’s a wonderful way to get communication off to the family with no cost,” Cibert said.

Cards have also been given to Nick Koza, son of local residents Bill and Lynn Koza, who is in the Marine Corps and preparing for another deployment.

Jo Hanson, president of the auxiliary, said troops have appreciated the gift.

“There’s something, too, just knowing it came from home,” Hanson said.

The women said there are some soldiers who never get cards or letters from home, and packages are often shared with others.

“My heart goes out to those who don’t get that kind of support,” said Lynn Koza, who is also a member of the auxiliary.

The women said they hope the effort will only continue to grow in the future.

“The main thing we have to remember is these men and women are sacrificing their lives to be there,” Lynn Koza said.

In addition to the cards, the auxiliary is involved with several other efforts, including raising money for back to school supplies and snacks for local children at school and handing out thank you cards to veterans whenever they come in contact with one.