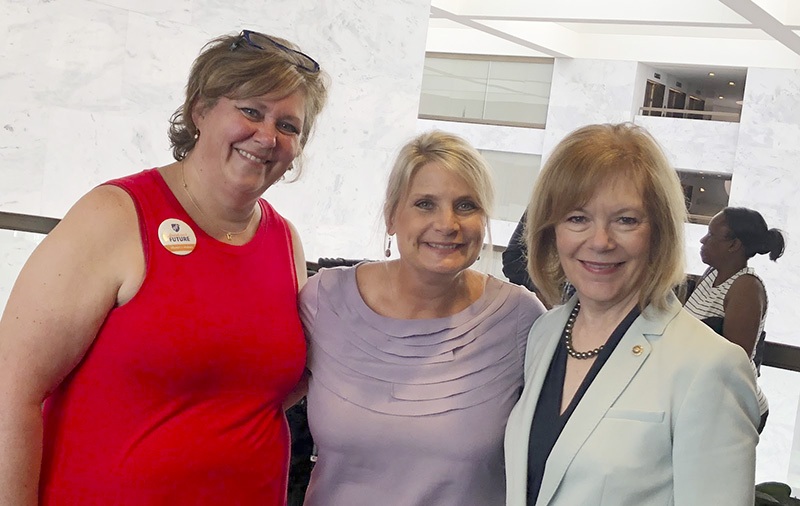 Stephanie Hallman and Carol Thompson met with U.S. Senator Tina Smith prior to the American Federation of Teachers Together Educating America’s Children conference in July. Provided

Educators from around the country attended the American Federation of Teachers Together Educating America’s Children conference from July 11-13 in Washington, D.C., according to a press release

The conference was attended by area teachers, including Stephanie Hallman of Alden-Conger, Brad Root of NRHEG, Carol Thompson of Alden-Conger and Al Helgerson of Albert Lea.

The teachers were invited to lobby before the conference. American Federation of Teachers President Randi Weingarten and U.S. House Reps. Lori Trahan and Rosa DeLauro briefed the assembly before the teachers ventured out to voice their concerns on education funding, the PACT Act — which fully funds the Individuals with Disabilities Education Act and Title I, and the Public Service Loan Forgiveness program.

The group met with staff from U.S.  Rep. Jim Hagadorn’s and Minnesota Sen. Amy Klobachar’s offices, and visited with Sen. Tina Smith and her office staff.

Amy Siskind joined Weingarten for a question-and-answer session about her book, “The List.” According to the release, her book logs a week-by-week account of Trump’s deviation from the democratic processes during his first year of presidency. She expressed that the American people need to be educated about these issues, stay involved, keep up the activism and reach out to their Congress members, the release stated

Weingarten reportedly said the union can play a significant role in the process of protecting democracy, but it is going to take everyone.

“Educators must be guardians of our democratic principles such as human dignity, equal rights, tolerance of diversity, civility and the rule of law,” Weingarten said in the release. “The fight to safeguard American democracy begins in our classrooms and our schools.”

Attendees had the opportunity to participate in different sessions on the democratic principles throughout the conference.

Day two’s session, “Teaching and Reaching All Students,” encompassed the importance of inclusiveness, social justice and developing relationships with each student to be able to reach their specific needs before learning can take place. Various sessions on engaging students, equity and social justice were available for educators to attend.

The final session, “Making Our Schools Safe, Supportive and Responsive Learning Environments” honed in on social and emotional skills and developing a positive learning environment for students.

The AFT TEACH Conference takes place every other year in Washington, D.C., which offers educators an opportunity to network with others around the country, attend sessions for continuing education credits and take an active role in the democratic process by lobbying for education.