Low-income immigrants shying away from benefits, even with Trump rules still weeks away 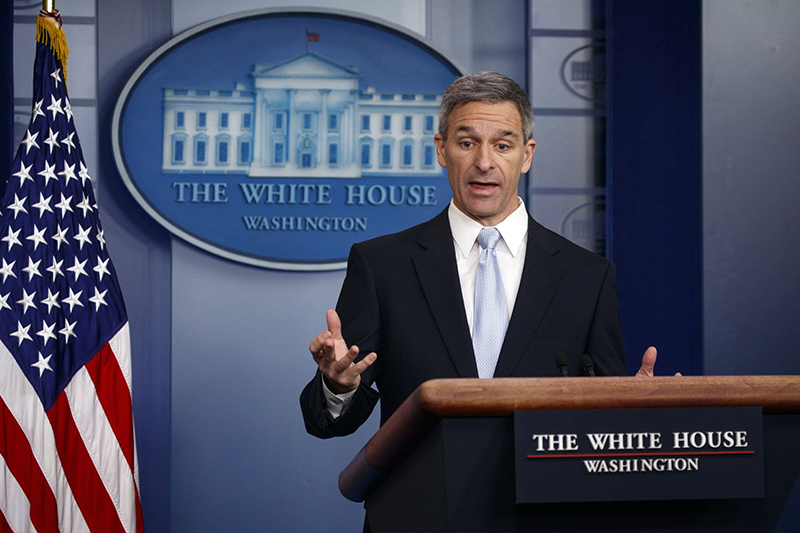 Acting Director of United States Citizenship and Immigration Services Ken Cuccinelli speaks during a briefing at the White House on Monday. He said Tuesday that the line from a poem inscribed on the Statue of Liberty should be changed to “give me your tired and your poor who can stand on their own two feet and who will not become a public charge” from “your tired, your poor, your huddled masses yearning to breathe free.” - Evan Vucci/AP photo via MPR News

The Trump administration announced this week new rules that would penalize legal immigrants who rely on public benefits, but many low-income immigrants and refugees in Minnesota already started withdrawing from social welfare programs months ago, according to several nonprofits serving refugee and immigrant clients.

On Thursday, Minnesota Attorney General Keith Ellison announced that he joined 12 other attorneys general across the country in suing the U.S. Department of Homeland Security over the “public charge” rule.

Micaela Schuneman, refugee services director at the St. Paul-based International Institute of Minnesota, said her organization has seen a 10-percent drop in the number of eligible clients enrolling for public benefits as soon as the administration proposed the rule last October.

Also, half of the institute’s clients have expressed concerns about repercussions from being labeled as a “public charge,” even though refugees and asylum seekers wouldn’t be affected under the new provision, Schuneman said.

The provision, which is slated to go into effect this fall, allows federal officials to deny permanent residency status to legal immigrants if they receive government benefits — including food stamps, health care and public housing — or are likely to do so in the future.

In other words, the rule will make it harder for these immigrants to obtain a green card, a vital step in the process of obtaining U.S. citizenship, and could exclude them from petitioning for their family to come to America.

To avoid any obstacle that might risk their dream of becoming permanent residents, many low-income immigrants are not enrolling in public assistance programs, said Colleen Moriarty, the executive director at Hunger Solutions Minnesota. Her organization has also noticed many people opting out of assistance programs since the changes were proposed.

“There has been a reluctance for families to sign their kids up for reduced lunch,” said Moriarty. “These are people who deserve and need benefits.”

This week, Ken Cuccinelli, the acting director of U.S. Citizenship and Immigration Services, said the new rules would promote “self-sufficiency.”

“All immigrants who can stand on their own two feet, self-sufficient, pull themselves up by their bootstraps,” would be welcome, Cuccinelli told NPR.

The public charge provision marks the latest in President Trump’s series of anti-immigration policies, many of which he promised during the presidential campaign.

After taking office in 2017, for instance, Trump signed an executive order that barred refugees from predominantly Muslim countries from entering the U.S.

In 2018, his administration reduced the number of annual refugee admissions to 30,000 — the lowest annual cap the U.S. has accepted since the creation of the Refugee Act in 1980.

Meanwhile, Immigration and Customs Enforcement has intensified its effort to expel unauthorized immigrants, including people who have lived in the United States for decades and have no violent criminal records.

Then this week, the administration announced a revision to the public-charge provision, which has been practiced since the 17th-century, when British colonial rule brought it to the Americas.

At the time, it was called the “poor law,” and the colonial authorities used it to arrest street beggars and bar poor people from certain areas. After the U.S. gained its independence, some state and municipal governments adopted the practice, which later became known as public charge.

States like New York and Massachusetts used the provision to deport or deny entry of undesirable immigrants — or those who could not provide for themselves and would end up in publicly funded shelters.

In 1882, the federal government inherited the provision when Congress passed the first comprehensive immigration law, which excluded “any convict, lunatic, idiot, or any person unable to take care of himself or herself without becoming a public charge.” After that, each administration has tweaked the public-charge rule.

Since 1999, previous administrations defined a public charge as someone whose main source of income was cash assistance or someone who depended on the government for long-term care, according to the U.S. Citizenship and Immigration Services.

The revised version, however, considerably expands the provision to any immigrant who has received certain public assistance including food stamps, Medicaid or Section 8 housing vouchers for more than a year.

“Minnesotans want everyone to live with the same dignity and respect that they want for themselves,” Attorney General Ellison said in a statement. “Once again, the president is trying to divide Minnesotans from each other, this time by pulling a bait-and-switch on our immigrant neighbors, friends and co-workers. But it won’t hurt just them — it will be a burden on and hurt every one of us in the long run.”

Lenore Millibergity, interim executive director at the Immigrant Law Center of Minnesota, said her organization is “looking at several different options” and deciding what will most likely have the “best outcome to try to stop this rule.”

‘Our participants are quite frightened’

Nancy Brady, the president of Neighborhood House — a nonprofit that provides food support, housing, education and youth leadership programs to residents of St. Paul — has also observed a similar trend in the immigrant communities the organization has served.

“Many of our participants are quite frightened,” she said. “Many quite don’t understand why they’re being vilified.”

Neighborhood House was established more than 120 years ago to serve Jewish immigrants escaping the pogroms in Russia.

Since then, those seeking assistance at the organization have shifted from predominantly Jewish and Russian-speaking immigrants to Asian, Latino and African immigrants.

These aren’t individuals who live to receive handouts, Brady said. They’re people “seeking to build their social and economic well-being, and really move from surviving to thriving,” Brady added.

Brady, other nonprofit leaders and state officials said they’re concerned that the public-charge rule might lead to bigger problems for immigrant and refugee communities — and for the state.

If families continue to not access needed medical treatment and health care services, it might lead to “far more expensive care later in the emergency room,” said Pamela Wheelock, acting commissioner of the Minnesota Department of Human Services, in a statement to MPR News.

“If families forgo well-child visits or immunizations, the state could see preventable disease outbreaks emerge,” she added. “Without adequate food and health care, children could suffer lifelong consequences to their health, academic achievement, and productivity.”