Lured by jobs and housing, Karen refugees spread across Minnesota 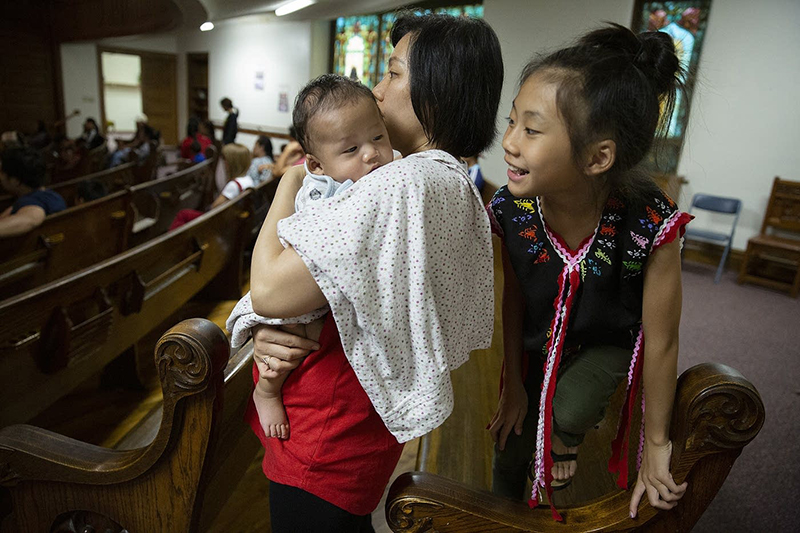 Greater Minnesota has given many refugees eager to make their mark in the American economy what the Twin Cities could not: ample jobs.

That was especially true about a decade ago, coming on the heels of the Great Recession. Unemployment was high, and a lot of companies in the Minneapolis-St. Paul region could afford to be picky. They were reluctant to hire people with limited English and no work experience in the United States.

Take, for instance, Pay Mu and Saw Tha Thaw, who arrived in St. Paul in 2008 as part of a growing wave of Karen refugees, an ethnic community from Burma — also known as Myanmar — escaping political violence and persecution in their Southeast Asian country.

Mu and Thaw struggled to secure meaningful jobs in the Twin Cities area. So, they turned to southern Minnesota in 2010 to work on the production line at the Albert Lea Select Foods pork processing plant.

There, the couple found more than just a stable paycheck. “Albert Lea was smaller, quieter than St. Paul,” said their son, Sa Ba Taw. “The rent was also cheaper.”

The Thaw family is among a small but growing number of Karen refugees who are migrating from the Twin Cities metro area — to put down roots in places like Albert Lea, Austin, Marshall and Willmar in search of low-skilled jobs and affordable homes.

Since the 1940s, the Karen people have been struggling to break away from the repressive rule of the Burmese regime and trying to form an independent state. But the Burmese military responded with frequent attacks — burning Karen villages and persecuting the people.

Escaping that violence, many Karen ended up in camps in Thailand, where the U.S. government opened a refugee resettlement program in the early 2000s to bring them to the United States.

Census data records the Karen population under the broader label of “Burmese,” though it’s assumed most of them are ethnic Karen, said Andi Egbert, senior researcher for APM Research Lab.

Nearly 215,000 Karen live in the U.S. In Minnesota, that number is a little over 10,000, with the vast majority arriving here between 2005 and 2018, according to a report from the Minnesota Department of Human Services.

However, those numbers “are likely conservative,” said Egbert. That’s because immigrant and refugee communities are generally undercounted in official surveys “due to barriers such as language, fear and distrust,” she said.

Minnesota has one of the largest concentrations of Karen people in the nation. Egbert added that nearly 95 percent to all the Burmese in the state live in Ramsey County, which is home to the Karen Organization of Minnesota — or KOM — which bills itself as the nation’s largest nonprofit serving the community.

Branching out to Greater Minnesota

Over the years, KOM did not just serve Karen people in Ramsey County; it also connected those willing to move to Greater Minnesota for jobs and affordable housing opportunities.

In 2010, when KOM hired Thomas Ritnorakan as an employment counselor, he said many companies in the Twin Cities were not interested in employing newly arrived Karen refugees. That was mainly because these employers were still reeling from the Great Recession and balked at the idea of taking a chance on new refugees with limited English.

“Karen people had language barriers and didn’t have work history in America,” Ritnorakan said. “No company in the Twin Cities would even bother calling them for interviews.”

But many meat-processing plants and manufacturing companies in Greater Minnesota were happy to take in anyone who could show up to work, regardless of their education level or English skills.

Ritnorakan took that opportunity to connect Karen refugees to processing plants and factories in Albert Lea, Austin, Marshall and Willmar — where a handful of Karen workers had already established themselves.

In Albert Lea, for example, Ritnorakan started to place workers at the Select Foods pork processing plant. He also connected new workers with others who arrived there before them.

“The former workers used to give rides to the new arrivals,” he said. “They carpooled; they rented apartments together.”

In those early years, KOM employment counselor Ner Nu said, people were not permanently moving to Albert Lea. They would only stay there for work — and when their shifts ended, they returned to their families in Ramsey County.

But in the past five years, more and more people started moving their families to Albert Lea, where they rented apartments or purchased mobile homes.

Likewise, there are growing Karen communities in other cities in Greater Minnesota, including Austin, Marshall and Willmar, said Ritnorakan and Nur. Many of these workers left Ramsey County for assembly line jobs at meat-processing plants and factories.

But Karen people in Greater Minnesota don’t just come from Ramsey County, said Maylary Htoo Apolo, a legal assistant with the Immigrant Law Center of Minnesota’s Austin branch. There are secondary Karen refugees who have also relocated from states like New York, Georgia and Kentucky.

In Austin, many of them have secured jobs at Quality Pork Processors, Inc. and Hormel Foods; others commute between 30 to 45 minutes to neighboring towns for factory jobs. One particularly popular company among the Karen community in Austin and Albert Lea is Viracon, an architectural glass factory in Owatonna.

After more than two decades in a Thai refugee camp, Apolo first resettled in Columbia, S.C., in 2008. Three years later, she moved to Worthington, Minn., to be close to a family friend she’d known in the refugee camp.

Today, Apolo lives in Austin, where she and her husband are in the process of opening a grocery store that will serve the growing Karen community in the city. Census data for Karen population in Albert Lea and Austin don’t exist, but leaders from the community estimate about 1,500 Karen in the two cities and their surrounding region.

Putting down roots in Greater Minnesota

Both Albert Lea and Austin have seen a dramatic increase in the Karen population over the past decade, said Apolo and Sa Ba Taw.

When Apolo first arrived in Austin in 2017, she said that there were only three Karen families in the city. Today, that number is more than tenfold — and many of them have moved from the Twin Cities.

Members of the community are slowly putting down roots in Greater Minnesota as they open up grocery stores and restaurants, purchase mobile homes and establish their own churches, where they worship in their language.

When Mu and Thaw moved to Albert Lea in 2010, their son Taw stayed behind in St. Paul to complete his high school education at Como Park Senior High School. In 2012, Taw followed his parents to Albert Lea.

Since 2012, Taw said that he noticed the Karen community in Albert Lea had grown from about four families to 40 families. To accommodate the worshipers in the community, he helped organize an effort to purchase a mobile church, where between 50 and 70 people worshiped.

By mid-2015, there were more Karen worshipers than the trailer church could hold. In search of a bigger space, Taw reached out to people at the First Baptist Church, which stands just two blocks from downtown Albert Lea, to inquire about sharing space with the American congregation. The church opened its door to the Karen community.

In that same year, Taw left the city to attend Illinois’ Judson University, where he earned his bachelors’ degree in Christian ministry.

“We see this church as the best place and the best fit for the Karen people,” he said. “It’s home for the hundreds of Karen who call Albert Lea their home.”