Man known for rising above his disability, giving back to the  community

Area residents are remembering the impact of a Wells man this week who was killed Friday afternoon in a crash on Minnesota Highway 109.

Jason Niebuhr died Friday afternoon when the 2003 Ford Ranger he was riding in crashed on Minnesota Highway 109 west of Wells, according to the Minnesota State Patrol. 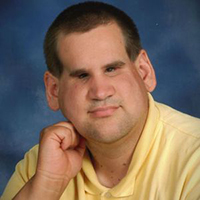 The 17-year-old boy who was driving the pickup is at St. Marys Hospital in Rochester. His name and condition have not been released.

The report stated the Ranger was westbound on Highway 109 when it drove onto the shoulder coming out of a curve. The pickup spun across both lanes and entered the south ditch and rolled.

It took place near the highway’s intersection with Faribault County Road 21 in Walnut Lake Township.

Brad Heggen, who has been asked to give Niebuhr’s eulogy at his funeral on Friday, said Niebuhr had been helping set up for Kernel Days earlier in the morning and had been expected to return to help later that evening.

Konrad Hawkinson, who worked for Niebuhr from 2016 to 2018, said Niebuhr looked forward to Kernel Days each year, particularly riding on his tractor in the parade.

Hawkinson said Niebuhr was a child at heart and was always quick to find a joke.

“Jason was quick-witted and always put a smile on anyone’s face,” Hawkinson said. “He knew everyone by their voice, even if he only met them once. Truly remarkable, gifted and loved by everyone in the community.”

Hawkinson said he and others were devastated to hear of the Friday crash.

‘His work was what amazed me’

Niebuhr grew up on a family farm southeast of Wells, the son of Lyle and Becky Niebuhr.

He was born with his vision but at the age of 4 months was diagnosed with retinoblastoma. By the age of 2, he was blind in both eyes.

His father also had the condition, which was genetic, and lost sight in one eye. He later died of liver cancer.

Mike Schrader, who said he has known Niebuhr since grade school, said Niebuhr’s disability didn’t keep him from being adventurous, noting Niebuhr rode a dirt bike around when he was younger and helped out on the farm.

“He just kept going,” Schrader said. “It didn’t seem to bother him.”

Heggen said he first met Niebuhr in 1996 when he moved back to the area and was substitute driving a school bus route. Heggen said he was amazed that Niebuhr, who was a United South Central student at the time, could give him directions on the route, even though he could not see, telling him when to make turns.

“It was really kind of amazing that without vision, he was still — he had a sense of direction,” Heggen said.

Since then, Niebuhr has worked with Heggen, who owns a real estate company, on purchasing a home and renting an office from him.

After graduating from USC, Niebuhr graduated from South Central Technical College and has owned and operated Wells Computer and Electronics for 16 years, fixing computers and working as an authorized DISH Network retailer.

“Ultimately his work was what amazed me,” Heggen said. “Most folks with those kinds of disabilities would take a step back or not go out and start his own business, or even work, quite honestly.”

But work he did.

Niebuhr was often seen on top of roofs and was seen all over town, often walking with a walking stick. He repaired and built computers by feel, according to a Mankato Free Press article from 2007, and could install motherboards, processors, cards, drivers and all other components of a computer.

Only when the wires were color coded or small would he need help, the article said.

Heggen, whose own business is just a few doors down from Niebuhr’s, said he was glad to help when Niebuhr needed help identifying a color. Beyond little things like that, however, Niebuhr was able to complete the whole task by himself.

‘He was really dedicated to the community’

In addition to his work, Niebuhr was known for his involvement in the community through various organizations.

Niebuhr owned several vehicles that he had for his business or to lend to other efforts where one might be needed, Heggen said.

Schrader said he recalled him loaning one of his vehicles for the Christmas tree pickup through the Jaycees and him helping with the club’s sandbox sale.

Neibuhr also had pride in his 1946 B John Deere tractor. Though he always had someone steer the tractor, he could work all of the other gears and operate it otherwise, Heggen said.

Heggen said he thinks it was Niebuhr’s parents who instilled in him his independence, learning not to rely on others but, instead, to make his own future.

“A lot of people have helped Jason over the years and were amazed by what Jason has done over the years, but I think he has taught us, really, but all he’s done over the years,” Heggen said. “Instead of just saying, ‘Woe is me,’ and saying everyone else should take care of me because I have these issues I have to deal with daily, I’m going to go out and make a go of it.”

He said Niebuhr had a remarkable memory and could remember phone numbers easily.

To make others feel comfortable with his disability, he would often make light of his blindness and was known for his joking demeanor.

“It was his way of making others who might not be comfortable around disability like that, put us all at ease,” Heggen said.

Niebuhr’s funeral is slated for 2 p.m. Friday at Good Shepherd Lutheran Church in Wells. His visitation is scheduled from 4 to 7 p.m. Thursday at Bruss-Heitner Funeral Home in Wells and one hour prior to the service at the church.