Memorial services for Mary Ann West of Albert Lea will be at 1 p.m. Wednesday at Zion Lutheran Church in Albert Lea. The Rev. Matthew Lehman will officiate. Interment will be in Hillcrest Cemetery. Friends may visit with family one hour before services at the church. Bonnerup Funeral Service is assisting the family. 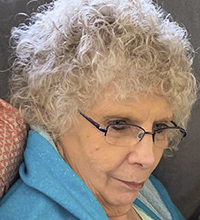 Mary died Wednesday, July 31, 2019, at Good Samaritan Society of Albert Lea after a brief and courageous battle with cancer. She was 71.

She was born Nov. 30, 1947, in Albert Lea, the daughter of Edwin R. and Ellen L. (Heskett) Nyman. She attended Albert Lea schools. Mary’s first job was at Herbergers in Albert Lea, where she served as the elevator girl.

On June 4, 1965, she was united to Dean R. West in Northwood. Following their marriage, the couple moved to Chico, California. They returned to Albert Lea and started their family, adding two beautiful girls: Angela and Shelley. In addition to making a loving home for her family, Mary also worked at Sibley School, JCPenney and Hy-Vee.

Mary had many favorites, some of which included sewing for her family, shopping, coffee with the girls, playing bingo, loving up her animals and watching Animal Planet. Spending time with her best friend, Bernadine Cornick, and her family — especially her grandchildren — were the most precious times of all.

Mary will be remembered as a gracious, loving, giving caretaker of all — her family, her friends and her animal family, as well.