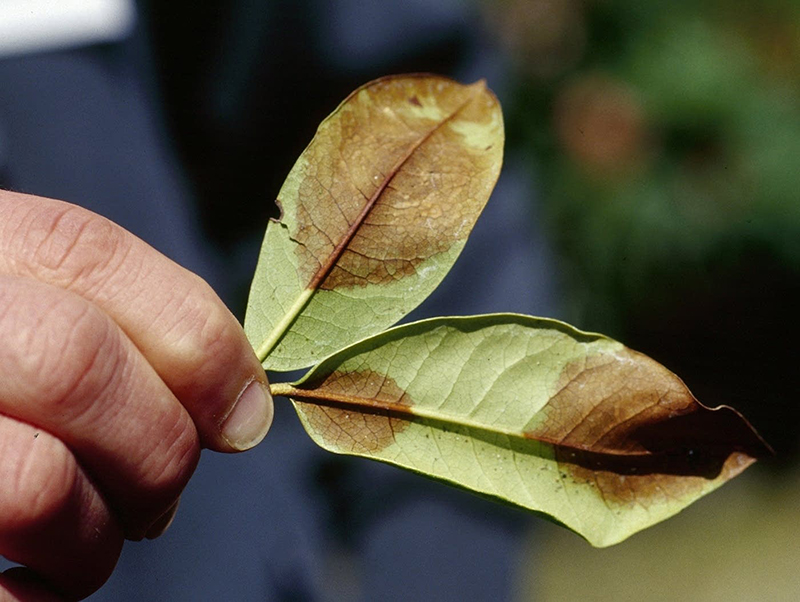 State agriculture officials say a fungus-like organism that has killed millions of oak trees on the West Coast has made its way to the Midwest — and they’re asking for the public’s help in monitoring for its possible spread to Minnesota.

Rhododendrons infected with the organism — called Phytophthora ramorum — were found this year in Iowa, Indiana and Illinois. The shrubs can be a carrier of the disease.

“Minnesota did not get a shipment of infected plants,” said Michelle Grabowski, a plant pathologist in the Minnesota Department of Agriculture’s Plant Protection Division. “But because there’s infected plants near Minnesota, we want to make sure that anyone who has recently purchased a rhododendron shrub takes the time to go and carefully look at that shrub, and look for symptoms of this particular pathogen.”

Those symptoms include leaves with large, brown blotches, as well as young green stems and shoots that turn brown and shrivel. Anyone who spots those symptoms on a recently purchased rhododendron — one that was purchased in 2019 — is asked to call the state’s “Arrest the Pest” line at 888-545-6684, or email arrest.the.pest@state.mn.us.

State officials said in a news release that Phytophthora ramorum “is responsible for killing an estimated 30 to 45 million oak trees in coastal forests” of Oregon and California. It destroys the tissue that transports food and water in the trees.

While the oak species dying on the West Coast are different from those native to Minnesota, Grabowski said tests have shown that Minnesota’s red and white oaks are susceptible to the disease.

The pathogen affects dozens of other plants, including rhododendrons.

“It won’t necessarily kill those particular plants, but they can spread the spores of the pathogen from that plant to trees in the native forest,” Grabowski said. “So that’s what we’re trying to protect, is our oaks here in Minnesota, the red oaks and the white oaks. We don’t want this pathogen to get into the natural environment.”