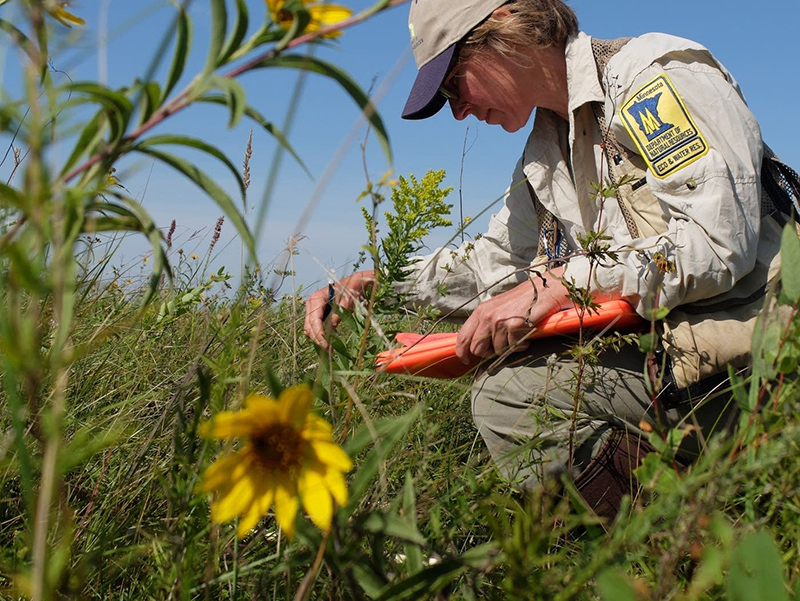 DNR project coordinator Erika Rowe identifies prairie plants near Twin Valley on Saturday. It is one of hundreds of long-term monitoring sites being established across the state. Crews will return every six years to document changes. - Dan Gunderson/MPR News

The wind whips Erika Rowe’s hair as she stands in a western Minnesota prairie and studies a GPS screen. She’s trying to determine the precise location for a small piece of this prairie which will become a monitoring site for scientists trying to understand better the ways Minnesota’s ecosystems are changing.

She’s project coordinator for the state’s new ecological monitoring network, hundreds of small plots in prairies and forests where researchers meticulously document every plant species. They hope to gather enough data — and return to each site enough times over the years — to be able to tell the story of Minnesota’s changing landscape, and predict where those changes might lead.

At this patch of prairie just outside Twin Valley, surrounded by wild sunflowers and short grasses, Rowe and three colleagues carefully measure a 45- by 20-meter plot, record its precise GPS coordinates and sink a metal stake in each corner of the rectangle. When researchers return in a few years, they’ll find the stakes with a metal detector.

“Our plan is to revisit these plots about every six to seven years,” Rowe said. “Hopefully I’ll still be here, but the crew will probably be different, so somebody has to be able to locate these exact spots again.”

The DNR began work on this project in 2016, with funds directed from the state Legislature. It’s the first long-term monitoring program of its kind in Minnesota. Since then, Rowe, the project coordinator, and her team have established about 150 monitoring plots, with a goal of eventually establishing 600. To minimize human bias, a computer program randomly chooses the locations for each monitoring site.

Once each site is established, Rowe and her team catalog every single plant species. Researchers hope that the volume of data gathered with each visit will help scientists and land managers understand how and why forests and prairies are changing.

“It’s everything from long-term climate change to increasing invasive species to changes in how we use the land,” said Hannah Texler, plant survey supervisor for the DNR’s Minnesota Biological Survey, who manages the overall project.

“It’s important for us to understand how all of those stressors are impacting vegetation so we can do a good job of managing and protecting our land.”

This crew of four — Rowe, botanist Nathan Dahlberg and two technicians — has been on the road, setting up monitoring sites, since late May. They’ll keep at it until mid-September.

Earlier this month, the team was working along Lake Superior’s North Shore. Last week, they were on the prairies of western Minnesota.

“It’s one of the treats of this project, getting to go to all of the community types across Minnesota,” said Dahlberg, as he worked to identify all of the prairie species in a square-meter grid. “Each week, I can be writing down a whole different list of species. It’s a lot of fun.”

The sites are located on public land — like the spot on the Twin Valley Prairie Scientific and Natural Area, which is owned by the DNR — and on private property where landowners are willing to allow the long-term monitoring.

At each location, the crew will identify all of the plant species in 24 precisely located one-meter squares. At a prairie site like this one, it can take eight to 10 hours to document all the plant species. Six years from now, another crew will be back to examine the exact same patches of prairie.

“This is a huge project, and it takes a lot of staff time and money to have crews go out and establish these permanent plots,” said Rowe.

Dahlberg said across Minnesota’s various ecosystems, there are about 2,400 plant species from trees to tiny lichens. There can be dozens in a healthy prairie.

But Minnesota has lost more than 98 percent of its native prairie. And what remains is fragmented, surrounded by farmland or divided by development. Those mostly small patches of prairie are more susceptible to losing native species — and to gaining invasive ones.

Invasive plants have already made a noticeable mark on Minnesota’s landscapes in the past few decades. Rowe and her colleagues see their presence up close.

“I wish we could have actually started this program 20 years ago,” Rowe said.

As they travel around the state establishing the monitoring sites, the crew often hears a common refrain from landowners.

“They all kind of have a very similar story about how they’ve witnessed their land change within the last 10 to 15 years,” said Rowe.

During a trip to southeastern Minnesota, a landowner described how, where there was once a diverse mix of native plants, invasive buckthorn has displaced most native species.

And invasive earthworms cause a significant change in forests, most pronounced in the southeastern part of the state, often leaving the forest floor bare of plants and dead leaves, which leads to erosion and a loss of native plants.

It will take years to document some of the changes, like oak forests giving way to maple, but the role of invasives in changing forest and prairie is already clear.

And while Rowe wishes she already had decades of monitoring on the books by now, she is confident this is still a good time to be paying close attention to the changes happening all across Minnesota.

“Who knows? Twenty years from now we could say ‘Well, I’m glad we started it back then,’ because who knows, maybe we’ll have a whole other set of species that are moving in,” said Rowe.

And this monitoring could help provide an early warning of new invasive plants.

As data is collected from monitoring sites across the state, private landowners and public land managers will get detailed reports on what researchers find. As the data is compiled it will also be available to scientists and the general public.

Texler hopes the monitoring can continue for at least 50 years, but she acknowledges it doesn’t currently have a long-term source of funding. Over decades, the data will broadly show the impact of climate change and invasive species.

It might also help managers better understand how fire changes prairies or the effect of different logging techniques on forests.

“We have managers who are spending a lot of time and a lot of money managing ecosystems the best ways they know how without data to show what’s actually happening,” she said. “We hope to be able to show all of these things, to help managers do a better job of managing and protecting these native habitats.”