Residents to celebrate completion of mural 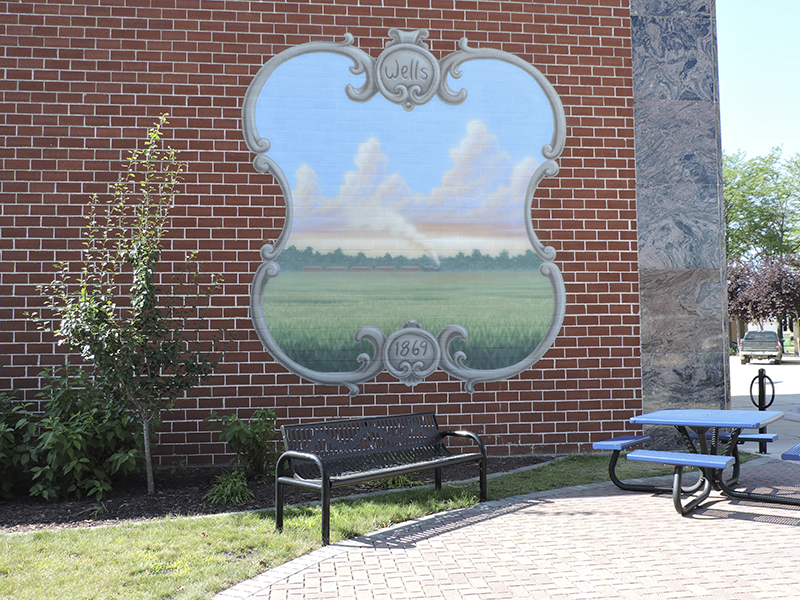 A mural was recently painted on the north side of the Wells City Hall building next to Lions Plaza to commemorate the 150th anniversary of Wells. - Kelly Wassenberg/Albert Lea Tribune

A new member of the Wells community has left a lasting impact on the city by donating his time and talents to creating a mural to commemorate its 150th anniversary.

Dale Mather, originally from Minneapolis, painted the mural on the north wall of the Wells City Hall building. While he donated his labor, the materials for the project were donated by Creative Wells, an organization in Wells focusing on encouraging arts in the community.

According to a press release, the group was hoping to do something to spruce up downtown Wells prior to the ongoing military exhibit at St. Casimir’s School and Kernel Days activities that begin Wednesday.

Mather was approached by a board member of Creative Wells and had his own ideas on what such a project could entail. As an artist who has experience in working with wall finishes, murals and fine art, he sketched up a proposal and presented his idea to the Wells City Council.

The mural depicts Wells in its earliest days, when it was founded by Clark W. Thompson of LaCrosse, Wisconsin. Thompson wanted to extend a railroad through Minnesota and financed the project himself. The territory on which Wells now sits was staked out in June 1869, and railroad tracks and the first railroad cars reached the village in January 1870 — making Wells the first railroad town in the county.

To celebrate the completion of the artistic piece, there will be a meet and greet with the painter from 5:30 to 7:30 p.m. Thursday at Lions Plaza in downtown Wells. Light refreshments will be served.