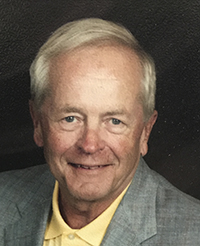 He lived in several cities in both North and South Dakota during his early childhood, eventually returning to Minneapolis, where he graduated from Washburn High School and then the University of Minnesota, where — like his father — he was on the swim team. Always interested in cars, Tom worked in the automobile business while in high school and college. Not long after graduating from college, he partnered with his brother-in-law, Herb Tousley, to operate a small Ford store in White Bear Lake.

Herb and Tom — and later good friend and business partner, Ron Glassman — took this small Ford store with a one-car show floor, Tousley Ford, and grew it over the years to become one of the largest automobile dealerships in the nation.

Tom was a man of faith and a long-time member of St. Andrew’s Lutheran Church, serving in a number of capacities there, including the church council.

He had many interests and passions, including family, friends, work, flying, hunting, fishing and golf. Tom was also a history buff who especially enjoyed reading books about early American history. Friends and family will remember Tom as a man of integrity, kindness, generosity, tenacity and wasn’t afraid of hard work. He touched the lives of many people throughout his life. Tom was a special husband, father, grandfather and brother, and will be greatly missed.