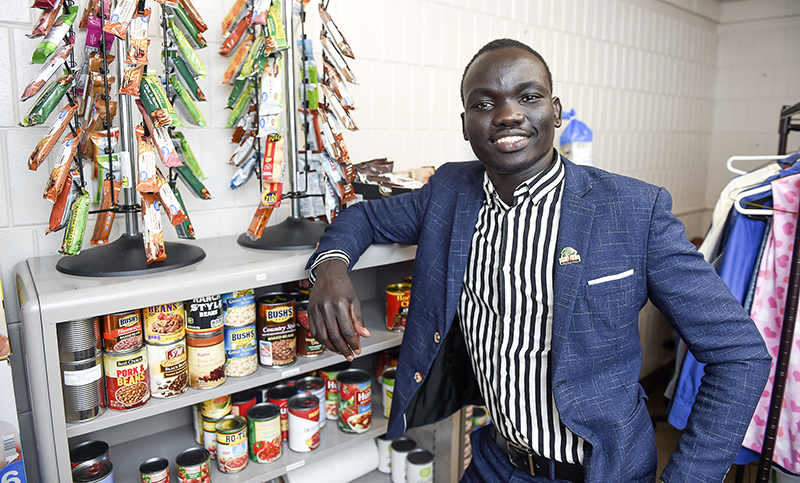 After winning his LeadMN presidency a couple months ago, Oballa Oballa wasn’t ready to satisfy his appetite for making sure college students statewide were being fed.

Oballa — who served as the former Riverland Community College Student Senate president — has testified multiple times at the state capitol ever since securing his leadership position at LeadMN, advocating for students and mounting pressure on state government officials to address food insecurity on campuses.

“We have seen the food insecurity in Minnesota and how concerning it is for our two-year community college students,” Oballa expressed. “It is not only a Minnesota issue, but a nationwide problem.”

Traveling from campus to campus all over the state, Oballa has initiated dialogue with fellow students who were passionate about ensuring success in higher education.

However, the hard choice of choosing between getting school bills paid or getting groceries have left many students struggling.

Partnering with The Hope Center for College, Community and Justice, LeadMN was able to produce a report that examined at a statistical level the impact of food insecurity on college students and how many people were struggling because of food insecurity.

“No student should go hungry on campus,” Oballa said. “The data shows that Minnesota faces a food insecurity epidemic on our community college campuses. State policy needs to do more to connect students to resources

that will help meet their basic needs.”

A bite from a bigger problem

These statistics didn’t shock Oballa; rather, it affirmed his point that many college students are struggling to continue forward with their higher education because they have to make a tough choice in paying for school, but are also attempting to have their basic needs met.

“It’s really something that I see happening on campuses, and we have more students struggling with food insecurity while attending school,” Oballa noted. “There’s still a lot more that needs to be done. This didn’t surprise me at all.”

This data was delivered a few weeks after a bipartisan bill was passed at the state level designating community colleges as “hunger-free campuses.” Schools that want to receive this designation need to meet five criteria:

By having a program like the one that was initiated by the state, Oballa believed that it created a roadmap for other schools to follow as they continued to achieve progress in better supporting their students who are experiencing hunger because of education costs.

“I think seeing this bill being passed is a big win for our students,” he said. “I myself was so happy. I didn’t think I could be doing something like this that would lead to a bipartisan bill that would help all of our leaders from both sides seeing the struggles that students are going through and the concerns they’re having.”

Some schools have already taken the initiative in addressing food insecurity directly. Riverland Community College has been active in establishing two food pantries. One that opened more than a year ago sits inside the East Building, while the West Building recently opened its food pantry back in February. 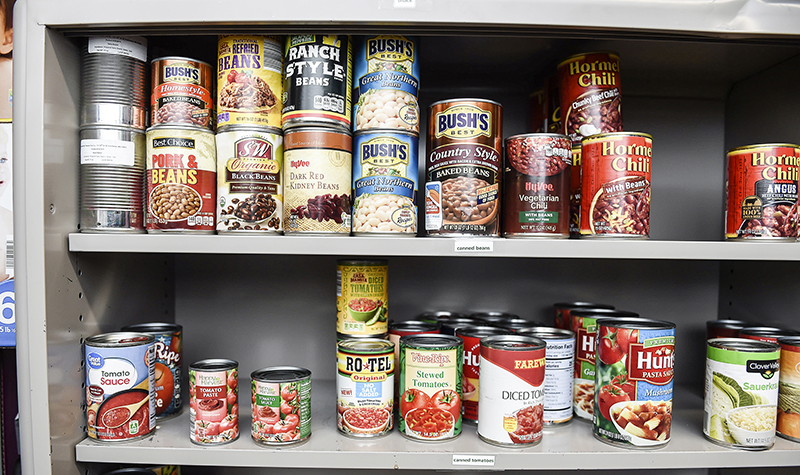 Canned goods filled the shelves of the food shelf at Riverland Community College. The shelf was created to make sure students had access to food when money was tight. – Eric Johnson/Albert Lea Tribune

Since the creation of the food pantries, more than 200 individual students have used the resource for a total of 1,500 visits, according to Keith Cich, Riverland Student Senate advisor, with an average number of between 15 to 30 students visiting by per day.

“Looking at the criteria for the designation, it was clear that Riverland had already met all the requirements to be designated as a “hunger-free campus,” Cich said, noting the available resources such as food pantries, information provided about SNAP and other public services as well as providing emergency funds in gas and grocery cards along with additional support services through the Riverland Foundation.

Cich also stated that there is a group of students who meet regularly to discuss food insecurity on campus, and Alexis Parsons, the new Director of Residential and Student Life, will work closely with the Student Senate to address those issues in conjunction with engagement and success.

“Riverland is currently expanding to offer food pantries on the Albert Lea and Owatonna campuses to provide support for all of our students,” he said. “We also have two Riverland Student Senate members who have LeadMN regional positions this year to address these issues at the southeast regional level.”

Despite the state acknowledging the need to assist students who are struggling with food insecurity, there is still work that needed to be done.

From seeing reports and what Riverland sees on a daily basis, it was clear to some that student success in college was highly dependent on being secure in having their basic needs met. The full scope of the issue hasn’t been completely fixed at the systemic level.

Having students like Oballa taking the reins in initiating change and working toward helping their peers was something that Cich felt was the epitome of the potential he sees in his students.

“I’m proud to work with students like Oballa and our Student Senate members who are so dedicated to their fellow students,” he said. “They want to ensure every student has the opportunity to succeed and reach their goals without struggling to meet their basic needs. They also know how important it is for students to feel like they not only are supported academically, but that the college community has a personal interest in them as a person and is genuine about the desire to see them succeed.”

As for now, Riverland continues to provide for students a means of succeeding while not having to make an unthinkable choice between affording school and affording a meal. While the hunger-free campus designation program may have college campuses talking more about addressing the problem, there’s still work that needs to be done to overcome those hurdles.

“Madison has been working very hard and continues (forward) with the work that I’ve started,” he said. “She is very passionate about these issues and wants to do more and looks at the bigger picture.”

It’s a certainty that many will still find Oballa continuing to ask the tough questions from leaders statewide about why students are still left making choices that would be detrimental to their success and continuing to educate others about ways of addressing hunger on campus.

“Students need to talk to their campus administration to explore what it means to be ‘hunger-free,’” he stated. “I came back as a president to put a lot more pressure on our state officials. We still have more to do.”