St. John’s Lutheran Community, consisting of two campuses in Albert Lea, announced a recent addition to its leadership team, according to a press release. 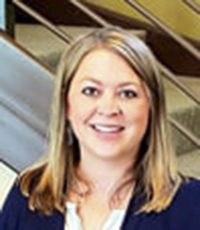 “I am excited to join such an engaged care team and look forward to working with the community to make every day enjoyable,” she said in the press release.

Cunningham was raised in Freeborn County and resides in Albert Lea with her husband, Colby, and their 18-month-old son, Cooper. She has spent 15 years in sales, marketing and management. She has also volunteered in local lake restoration efforts.