Tee It Up for Campers raises $32K in tournament 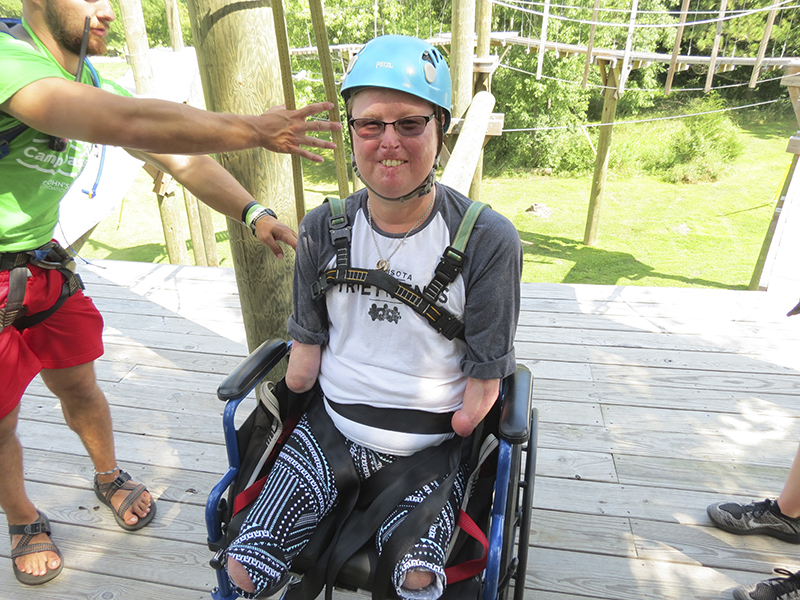 Alden resident Kari Nesje enjoyed attending True Friends Camp Courage in 2018 and 2019 thanks to funds raised from the Tee It Up For Campers golf tournament. - Provided

The 19th annual Tee It Up for Campers golf tournament fundraiser in Freeborn raised $32,000, a record for the event.

The tournament, at Oak View Golf Course, is organized by a group of volunteers from Freeborn, Alden and Albert Lea to support children and adults with disabilities attending True Friends’ camps, according to a press release.

The tournament consisted of 14 four-person teams who played best ball. There were putting contests and prizes for the longest drive.

The release stated a silent auction featured an array of items donated from local businesses, and there were signs along the course showcasing hole sponsors.

“People in our area realize True Friends is a worthwhile organization and they feel it is worth donating their time and effort to help make it successful,” said Jim Beach, volunteer leader.

Funds raised from the tournament help support True Friends and the children and adults with disabilities they serve. Alden resident Kari Nesje was a camper who received financial help from Tee It Up for Campers to attend True Friends Camp Courage in 2018 and 2019.

When asked why the Tee It Up for Campers volunteers continue to support campers attending True Friends camps, Jim Beach said, “Way back in 1953, my high school started the corn drive for Camp Courage. When the school closed, we wanted to continue to help keep Camp Courage alive.”

True Friends President and CEO John LeBlanc said his organization is thankful for the continued community support from the Freeborn, Alden and Albert Lea area.

“From Freeborn FFA starting the corn drive for campers to the Tee It Up for Campers volunteers organizing their 19th golf tournament fundraiser, we are very thankful,” Le Blanc said. “Their support is phenomenal.”

He thanked the golfers, volunteers, people and businesses that donated their time and money to the event.